Here is another example of orange rust, which are caused by two fungi, Arthuriomyces and Gymnoconia, the two of which are distinguished by the shape of their spores and life cycle length.  To re-iterate, growth of orange rust is strictly on blackberry and is favored by cooler temperatures and high humidity, but I have yet to see an infection of this rust explode across the landscape no matter what the conditions are.  Instead, several plants around a single locus will show infection at one time and the advance of the disease, if not addressed, is measured in years rather than days or weeks.

Orange rust is distinguished by the intensity of its orange color and the sharp outlines of the infected area.  Usually one can see the spores by rubbing or brushing up against the leaves.

Probably the most important point about managing orange rust in the field is that it is systemic and cannot be controlled by any fungicide we have labeled in blackberries.  Leaving plants alone or trying to spray one’s way out of it will end in tears.  Orange rust MUST be removed by hand, that is to say the whole infected plant dug out with a shovel.  It is best to remove plants directly adjacent to the infected area as well, since they are quite likely infected but not yet showing the symptoms.  Take care to remove the whole plant, including the roots down to at least 12 inches.  Plants should be bagged at the point of removal and disposed of properly.  Personnel removing the plants should use clothing which can be disposed of or washed quite soon after working with the infected plants so as not to continue to spread spores across the blackberry field over the course of the remaining workday.

One last point, graphically illustrated in the last picture, is that groundsel in blackberry fields gets a type of rust also, but this is not the same rust the orange rust occurring on blackberry and is rather a species of Puccinia.  Rusts tend to pretty specific to their hosts, so removing groundsel with the goal of reducing the rust pressure on blackberries will not work.

Yet another hat tip to the PCA and grower for letting me know about this one. 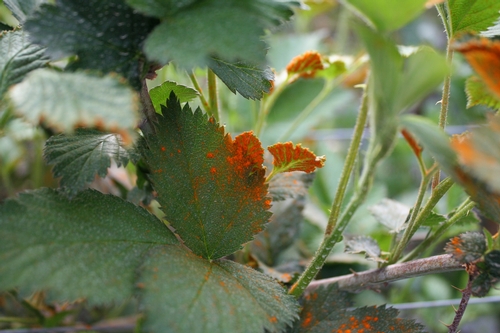 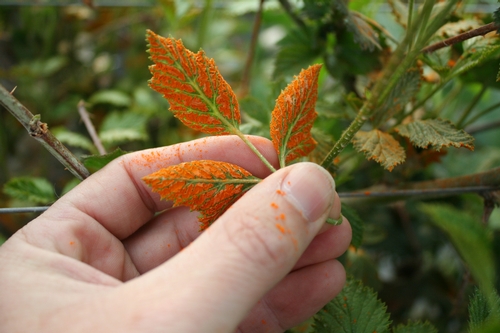 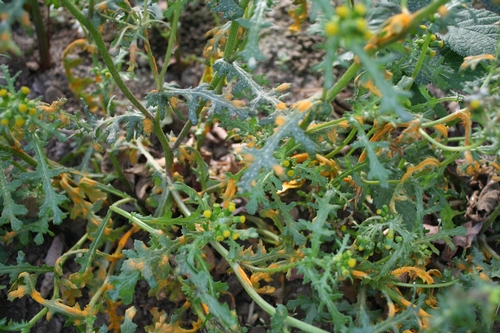