Light brown apple moth (LBAM) is a species of leafroller that was first detected in California in 2007 and is currently present on the Central Coast. It is a class A pest that has been subject to quarantine.  This has resulted in strict regulation of its host crops, mandating zero tolerance for larvae in fields or on harvested fruit, and occasioned the financially devastating closure of several fields of caneberries in 2009.

For 2010, Central Coast caneberry growers have a variety of management methods available to them which they can deploy in their efforts to prevent LBAM from being detected in their fields.  These methods are (1) mating disruption, (2) insecticide use and (3) cultural management.  The following is summary for growers of how best to integrate these three methods to achieve the greatest result.

Mating Disruption:  Field trials conducted by UC Davis in the fall of 2009 suggest that pheromone based mating disruption is a promising tool for managing light brown apple moth in caneberries.  While these trials tested three possible pheromone application technologies, currently only the twist ties, also known as pheromone rope dispensers, are available.

Mating disruption with pheromone based twist ties is very attractive to use as a management tool, because of low toxicity, compatibility with biological control, high specificity to the target pest, reduced risk of resistance and ease of use.  However, the use of twist ties should be supplemented at this time with insecticide sprays and cultural controls because it has not yet been determined whether there is a stand-alone twist tie application rate that will result in zero detection of light brown apple moth in fields, as currently mandated by state and Federal regulatory agencies.  Additionally, management of similar looking leafroller species is useful, to reduce the probability of economic loss due to delays for leafroller identification during cooler and field inspections. Twist tie applications for light brown apple moth are target specific and will not be useful for managing other lepidopterous pests such as orange tortrix.

Mating disruption works best when applied over large continuous areas.  Twist ties should be placed all across the production field.  Non-production fields should be included if they are mixed in production fields so a contiguous area is formed.  If possible, it is suggested to place twist ties as far out as the edges of the field or slightly farther where possible, to reduce the probability of a mated female moth flying in from external sources.

The minimum recommended label rate of 200 twist ties per acre appears to reduce LBAM pheromone trap captures to very low numbers, but does not result in zero detection of moths within a field.  Therefore, where economically possible it is recommended that the twist ties be applied at a rate higher than this, up to the higher end label-recommended rate of 300 twist ties per acre.  For severe infestations, more than 300 twist ties per acre may be warranted, so long as it remains below the maximum threshold allowed on the label. Twist ties should be attached to the upper trellis wire (see first picture below), and it is recommended that they be wrapped doubly around the wire if operations such as pruning and cane adjustment will be taking place for the duration of their use, which typically will be six months.  If in-field monitoring is being conducted and there is a rise in adult moth finds 3-6 months after initial twist tie application, this could be an indication of reduced pheromone release by the dispensers.  However, fluctuations in the moth population over time may also account for such a change, with flight peaks anticipated in the spring around April, June and a fall population peak between October and November.  Following the early spring application, if desired, twist ties may be applied again after harvest to target the fall flight peak.

Since caneberry hedgerows are smaller and larval leafroller populations lower in the early part of year it is recommended that a program of spraying begin in late February to mid-March.  As there is a wide variety of good leafroller pesticides available, growers should seek materials that have a lower impact on beneficials and the surrounding environment.  Materials should also be rotated to mitigate the potential for resistance to a single pesticide.

Following the initial early season spray, it is important that growers continue to monitor the field for leafrollers.   Growers should look for leaf surfaces that are webbed or rolled together, especially those of newly extending laterals Additionally, look for signs in newly extending laterals for webbing, frass, leaf damage, and the presence of larvae.
(for examples of LBAM and other leafroller infestation see photos below as well as the link: http://www.ipm.ucdavis.edu/EXOTIC/lightbrownapplemoth.html).
Another good way to look for leafrollers is to agitate the hedgerow, either by beating or shaking the plants, and collect the fallen material into a bucket or wide, flat container. Carefully sift through this material to detect larvae (early larval instars can be quite small). Concentrate monitoring activities in suspected or previously infested areas.

Any sign of leafroller activity should be a signal to act to protect the crop.  It should be emphasized here that the economic threshold for leafrollers during this period of regulation is zero, and subsequently the threshold for spraying is much lower than one would deploy in an integrated pest management program.

Cultural Controls:  Because of the zero tolerance mandated for light brown apple moth infestation in fields, it is recommended that growers impress upon harvest crews the importance of removing suspect rolled leaves, larvae and webbed fruit.  Considering that crews are passing over every foot of hedgerow at least three times a week during harvest, they can be very effective in reducing LBAM and other leafroller numbers.  An incentive program can be implemented to encourage participation with such a campaign of larval removal.

Proper sanitation practices during the dormant season will be an essential part of light brown apple moth management.  Larvae will overwinter in leaf trash and surrounding weeds.  Keep weeds to a minimum and move fallen leaves to the middle of rows where they can be disked into the soil.

There are pesticides mentioned for management of leafrollers in this article. Before using any of these products, check with your local Agricultural Commissioner's Office and consult product labels for current status of product registration, restrictions, and use information. 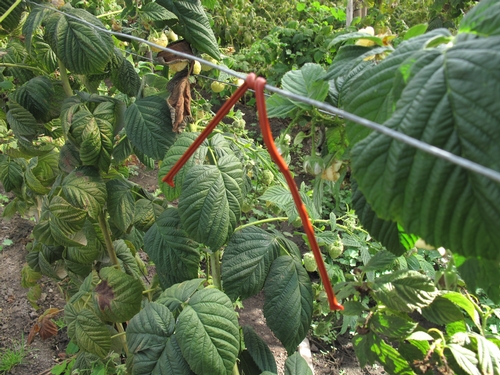 Photo courtesy Ed Show
Twist tie on wire of caneberry hedgerow. Note that while the tie in the photo has been wrapped around twice, even more times are recommended if operations such as pruning or cane adjustment are in the offing. 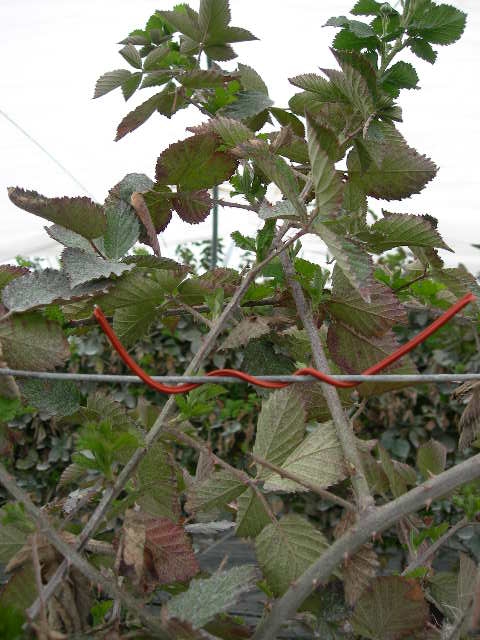 Photo Mark Bolda
Twist tie on top wire with several twists around, this one will not fall off. 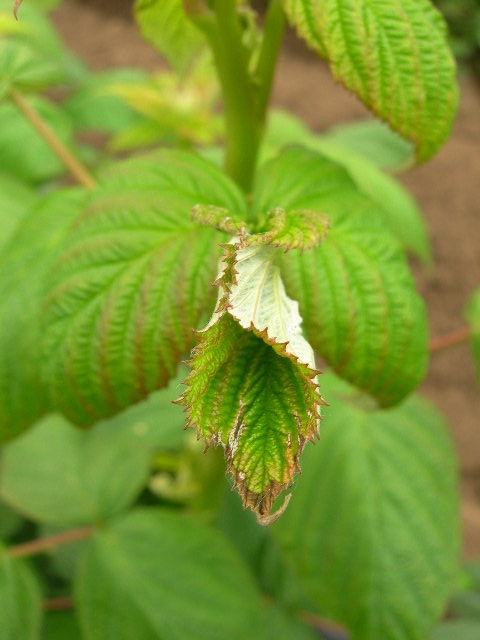 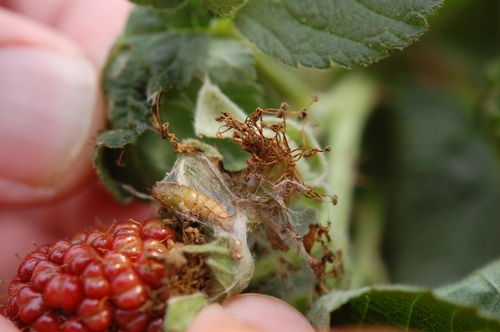 Photo courtesy USDA
Webbing typical of leafroller infestation in blackberry, in this case together with a pupa. 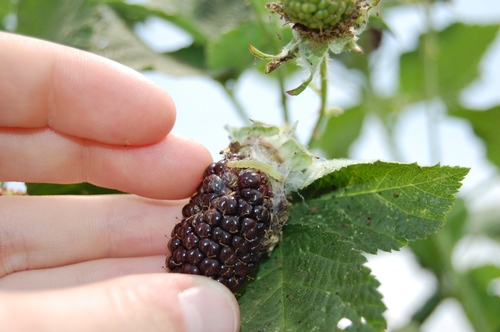