WED, JUL 15 2020
4:03:24
Trapping update for Spotted Wing Drosophila around Watsonville
Published on: April 21, 2010
Currently, activity for spotted wing drosophila (SWD), Drosophila suzukii, in Watsonville is fairly low.  A total of three females were taken out of six traps last week, and this week four females and three males were taken out of 11 traps.  SWD is currently only being found in raspberries northeast of Watsonville, traps south of the city in strawberries are bare.


Furthermore, as we work with identifying SWD, it is becoming easier to separate female SWD from other vinegar fly species.  The dark line delimiting the serrated edge of the ovipositor (egg laying organ) is quite obvious on many specimens under the 20x magnification available with a good hand lens.  Nevertheless, it is important that researchers and other insect professionals become familiar with this identifying feature under a dissecting scope before endeavoring to do it with a hand lens. 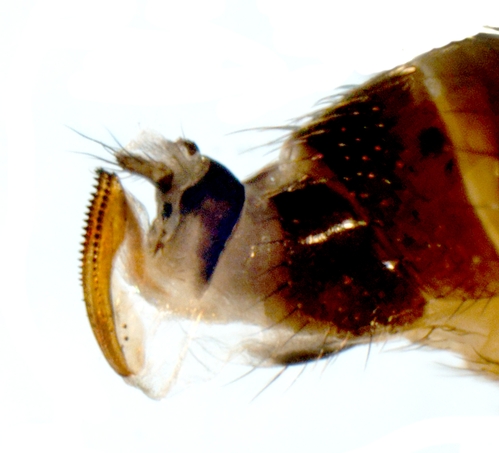 Photo courtesy of Martin Hauser, CDFA
Ovipositor (egg laying organ) of female spotted wing drosophila. Note dark serrations of edge of ovipositor. In nature, on a living fly, the ovipositor is held tight against the abdomen, but with serrations still fairly visible. 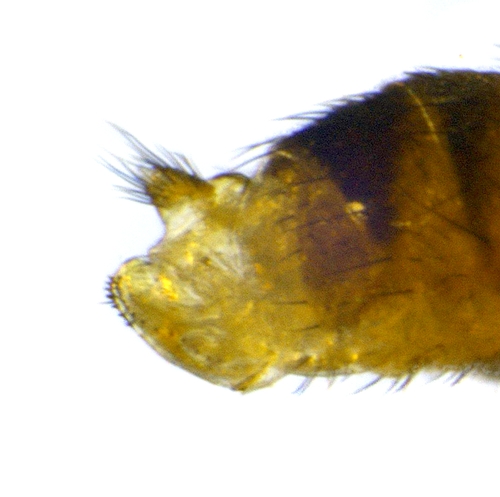