A few pictures here for the library on sodium chloride damage on raspberry.  Leave tissue concentration of sodium is over 250 ppm and chloride over 20,000 ppm (that's 2% of total dry tissue!).  Interestingly accumulation of the micronutrients zinc and copper in these plants is also notably higher than what would be normal for raspberry. 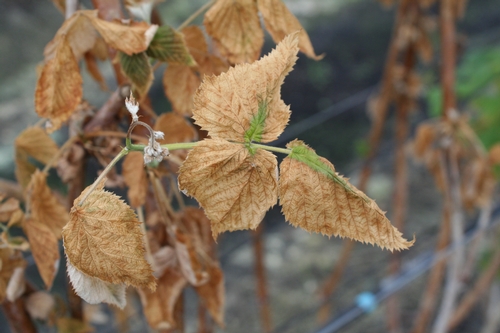 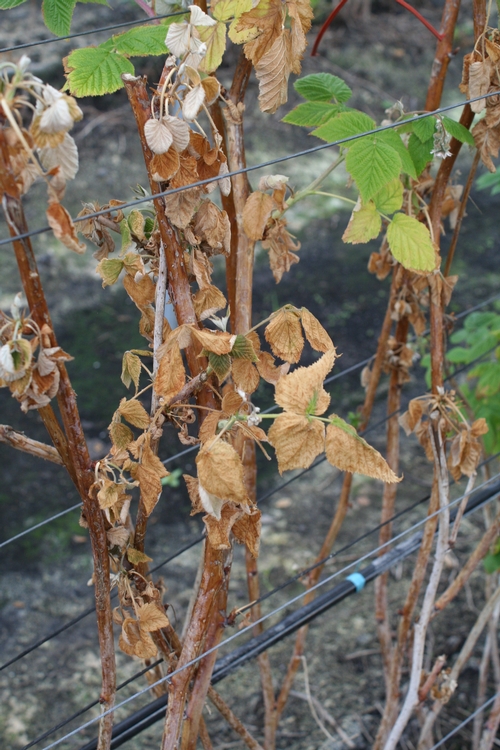 Entire cane affected by sodium chloride. Appearance of some green leaves on some laterals tells us that this plant can yet recover.
Tags: chloride (4), micronutrients (3), sodium (6)
Comments: 2
Sodium Adsorption Ratio (SAR), Briefly
Published on: May 21, 2014

I look at a lot of soil reports these days, and the sodium adsorption ratio (SAR) is one number that is very informative to me.

Simply put, SAR of a soil extract takes into account how much the adverse effect of sodium (Na+) is moderated by the other cations calcium (Ca2+) and magnesium (Mg2+). As you all know, calcium and magnesium can replace sodium on soil particles, subsequently permitting this toxin to be washed away from the plant roots.   So the more free calcium and magnesium we have around in the soil, the better odds we have of mitigating sodium.

SAR levels below 6 are OK, levels which run above 10 mean trouble.

I am writing this in response to the questions at yesterday's mineral nutrition meeting regarding the two different outputs on laboratory soil analyses for sodium. Pretty tough gig standing in front of about 70 of your peers and not having the answer right away, but so it goes.

The questions pertained to the difference between a reading of “exchangeable sodium” measured in parts per million (ppm) or mg/kg, and sodium measured in meq/l (milliequivalents per litre) from saturated paste. The photos below of three different soil samples tested by a local analysis provider shows the “exchangeable sodium” output in mg/kg (also read as ppm) on the right, and sodium measured in meq/L from saturated paste on the left.

Let's summarize a recent communication of mine with Dr. Tim Hartz from UC Davis in order to understand what these mean to us:

2. To see what is ‘active' and what the plant root is facing, one needs to look at the saturated paste analysis which measures soluble sodium.  Numbers around 3 or 4 meq/liter are good and don't indicate a problem; numbers much higher than these figures would be point to a sodium problem.

Let's go to the analyses below from some soils and practice with these numbers for exchangeable sodium and saturated paste extracts measuring soluble sodium. 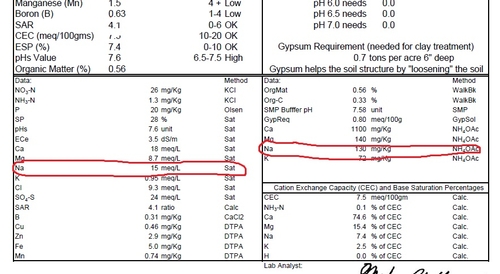 Sample # 1: Saturation extract of Na measured as 15 meq/L, and the amount of 'exchangeable sodium' of 130 mg/kg (ppm) is 7.4% of the total base saturation (box at bottom right) , well above the 2.5% which is OK for coastal soils . The strawberry plants from this area of the field were dead. 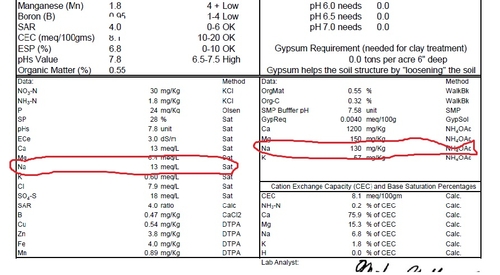 Sample #2: Saturation extract of Na measured as 13 meq/L, and the amount of 'exchangeable sodium' of 130 mg/kg is 6.8% of the total base saturation (box at bottom right) , well above the 2.5% which is OK for coastal soils. The strawberry plants from this part of the field were dying. 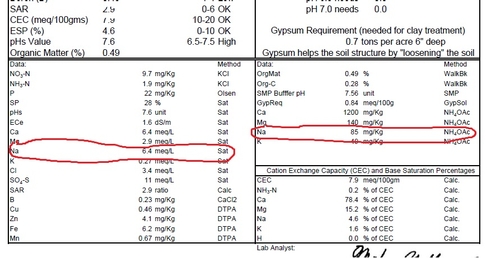 Sample #3: Saturation extract of Na measured as 6.4 meq/L, and the amount of 'exchangeable sodium' of 85 mg/kg (ppm) is 4.6% (box at bottom right) of the base saturation; seems OK. The plants from this area of the field were apparently all right.
Tags: sodium (6)
Comments: 0
Approaches to Preventing Strawberry Yellowing in Sodium and Chloride Affected Soils
Published on: August 27, 2012

The following is an addition to the post from August 2 concerning a case of yellowing strawberry plants in a field in Castroville.  To summarize, we concluded that the plants are turning yellow because they are being poisoned by excess amounts of sodium and chloride accumulating in the bed.

So of course, and indeed the question was asked right away, what can we do about this problem?  The three points below are a start:

1.  The dramatic accumulation of sodium and chloride at the surface of the bed in this study indicate that these are not being adequately leached, which was verified by our observation of soil saturation at depths below the bed.  If this is correct, by increasing drainage we will be able to ameliorate the situation and restore a normal leaching pattern.  Short of installing a system of subsurface drainage, there has been some anecdotal evidence of success in using a certain “Yeoman’s plough” which is essentially a shank going some 16 inches deep into the soil next to the bed opening a deep cut in the soil improving aeration and water infiltration.   This has not been tested in replicated trials however, so I can’t make a firm recommendation of this method at this time.

2.  We have every indication in this study that substantial amounts of calcium are precipitating out as lime, and is therefore not replacing exchangeable sodium.  We could reduce the amount of precipitation of calcium (increasing the exchangeable calcium) by acidifying the irrigation water which would go some lengths to mitigate the sodium hazard (SAR).

3.  Finally, there are other useful steps which can be taken to reduce the amount of sodium and chloride being introduced into the field.  For example, a grower experiencing a situation of high sodium and chloride should avoid using sodium nitrate or potassium chloride fertilizers. 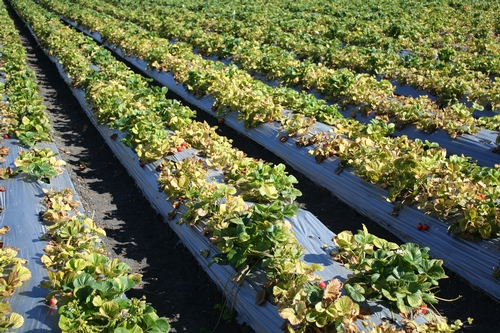 Field of yellowed strawberry plants in a chloride and sodium affected field in Castroville.
Tags: calcium (7), chloride (4), sodium (6), strawberry (74)
Comments: 0
Arrival at a Probable Cause of Yellow Strawberry Plants in Castroville
Published on: August 2, 2012

Introduction: The following is a description of a second, more thorough evaluation of the situation described previously in this space of yellow strawberry plants in a field in Castroville.  This issue of yellow strawberry plants popping up in certain locations in the Castroville – Salinas production area has confounded us for years, but I believe the work described below allows us to make a strong argument as to the cause is of this malady at least in this case.

Materials and Methods:  A total of four samples (two from an area of severe yellowing, and two from an area of apparently healthy green plants) were taken.  Following the output example posted below (Figure 2), each sample consists of 10 zones of a bed, and each zone is tested for 14 parameters.  At each soil sampling site, a representative plant sample was uprooted and taken away for analysis of tissue mineral concentration.

Results: The data in the Tables 1 and 2 below represent an average of the two samples taken each for yellow and green plants.  In order to better interpret the data, several zones have been grouped together.  Zones 9 and 10 represent the surface of the bed, zones 1, 2 and 3 represent the soil straight underneath the drip tape, zone 8 the plant zone, zone 7 the root zone and zones 6, 5 and 4 being underneath the root zone 7.

Table 1: Evaluation of Zones 1- 6 of Bed in Yellow and Healthy Areas

Table 2: Evaluation of Zones 7-10 of Bed in Yellow and Healthy Areas

Table 3: Comparison of Mineral Concentrations of Leaf Tissue for Green and Yellow Plants

I’ve also taken a look at the irrigation water.  As is common in northern Monterey county, the farm gets its water as a mixture of recycled water blended with well or river water.  A full report for an example of the blended irrigation water used on this farm is available from the Monterey Regional Water Pollution Control Agency at:

In the sample taken of the blended recycled and river water mix, conductivity (EC) was 1.3 dS/m, sodium 118 ppm, chloride 160 ppm and adjusted SAR of 3.4 (sodium adsorption ratio, an index of sodium hazard adjusted for the amount of calcium in the irrigation water).

Discussion:  The pH of the soil in the beds in all zones is quite high, which is not surprising because of the high percentage of carbonates (lime) throughout.  One can also see accumulations of nitrates, phosphates and potassium are substantially higher in the areas of the yellow plants, which quite likely due to their declining ability to take up the nutrients being continually applied as fertilizer.   It is worth noting that nitrates in the high concentrations found in our soil tests can be toxic to plants, thus accelerating the decline of plants.

Nitrites, generated from ammonium in anaerobic conditions, are zero, indicating adequate aeration in the bed.

In terms of the irrigation water, referring to the water quality guidelines for crops developed by UC Cooperative Extension, we find that the water used on this farm can be used with some restriction to irrigate crops moderately susceptible to salinity such as strawberry.  In other words, this irrigation water isn’t great but is OK.

Across all the soil samples the average amounts of sodium and chloride are above 250 ppm and 100 ppm respectively.   High as they are, the concentrations of both ions do not vary greatly in the plant and root zones and the zones around them in either areas of green or yellow plants. There are, however, substantial differences in the concentrations of these ions at the crust (zones 9 and 10) between green and yellow plant areas. For example, on average soil from areas of yellow plants there is nearly a twofold accumulation of sodium in the crust of soil taken as well as a substantially higher amount of chloride over the soil sampled around green, healthy plants.  This tells us that while these large amounts of sodium and chloride (also known as salts) are accumulating away from the plant via evaporation, they are nevertheless passing through more sensitive plant zones to get there.  It is not difficult then to hypothesize that during this transition the yellow plants are picking up these salts obtaining the fourfold accumulation of sodium and 40% increase in chlorides that we observe in the leaf tissue of yellow plants over that of green.

Furthermore, it is notable that the amount of lime (CaCO3) in all the soil samples is high.   This indicates that a lot of calcium coming into the soil from irrigation water is precipitating out and not as capable of sufficiently limiting the amount of exchangeable sodium.   In turn the sodium hazard is high.  This may also explain to some extent why areas quite close to one another respond differently, since in some areas (perhaps even quite close together) more calcium precipitates out than others.

My conclusion drawn from all this work in this particular instance of severe plant yellowing of strawberry plants is that the uptake of sodium and chloride by these affected plants is very high and they are being poisoned by salt.

Thank you to Frank Shields and Soil Control Lab for their generous assistance in this work.  Thanks to other colleagues for their valuable insight and input which assisted me in the development of my conclusion.

This project was supported in part with funds provided by the California Strawberry Commission. 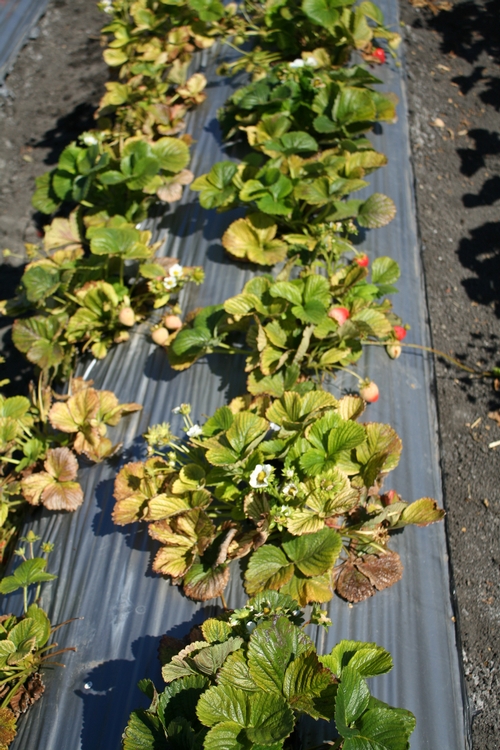 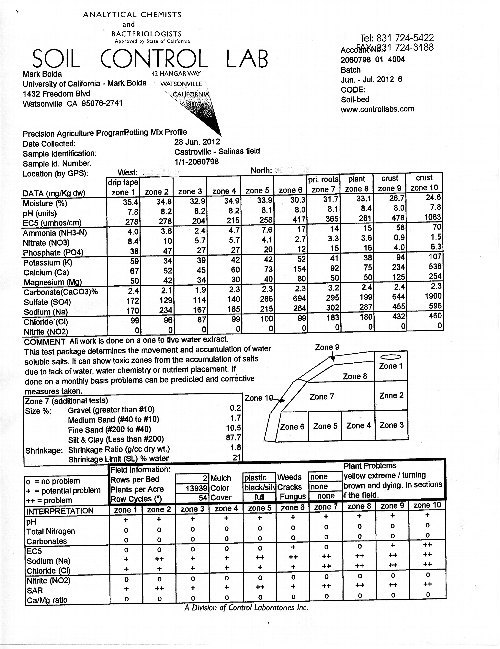