Oak woodlands are highly valued ecosystems that support numerous species of fauna. Oak trees serve as the anchor for these systems and support over 5000 insect species, over 105 bird species, 105 mammal species, 58 species of amphibians and reptiles during their respective life cycles. Many beneficial insects rely on oaks to complete their life cycles and do not damage the trees in doing so.

GSOB bore into the bark of its hosts to lay eggs and rear young. Mature beetles emerge to find new hosts. The adults leave a distinctive D-shape hole in the bark upon exit. The insects damage the water and food transfer structures (xylem and phloem) of the tree, causing crown die-back and eventual death in heavily infested (amplifier) trees. Widespread loss of oaks from GSOB has occurred in Idyllwild and San Diego County mountain areas.

Although GSOB are winged, they do not fly long distance. UC researchers, partners with CAL FIRE and the California Firewood Task Force discovered that several of the infestations throughout Southern California were caused by introduction of firewood imported from infestations in other areas. Ventura County is vulnerable to attack by the beetle and other invasive tree pests that are on watchlists for the area. Best ways of being assured your firewood is safe include purchasing locally source material or selecting kiln-dried or certified firewood. The maiden event is likely to become an annual springtime occurrence in Ventura County! A brand-new online course on Diagnosing Herbicide Injury focusing on how an herbicide injury situation can arise, what information can help diagnose symptoms during field investigations, and what tools are available to you, is now available from the UC Statewide Integrated Pest Management program (UC IPM).

When unexplained damage is noticed on a crop or other non-weed plant, herbicides are often a primary suspect. That is no surprise because herbicides are very powerful and effective tools used to control weedy plants in a wide variety of locations. However, symptoms of many other plant stresses, such as diseases and nutrient deficiencies or toxicities, can closely resemble the injury symptoms caused by herbicides. Economic implications of herbicide damage can vary–in some cases visible injury may have very little direct economic effect while in others, even slight herbicide symptoms can affect the marketability of affected plants. In addition, the presence of an unregistered herbicide on non-target crops can result in illegal residues which could have both safety and legal consequences. The new online course was developed by Dr. Brad Hanson and Dr. Kassim Al-Khatib from the Department of Plant Sciences at UC Davis, and UC IPM instructional designers. If you are a grower, pest control adviser, or pesticide applicator, then this course is a great opportunity to learn about how to approach crop injury investigation when herbicide is suspected cause. You will learn how herbicides injure plants, how long herbicide symptoms may last and factors that may influence the time that herbicide injury symptoms are visible, possible scenarios of herbicide exposure based on uniform and variable injury patterns observed in the field, how to prepare samples for the laboratory analysis and more.

The course content is free to anyone who wishes to view it. For those requiring a certificate of completion and continuing education units (CEUs), the regular cost is $30, but we are offering a reduced price of $15 through October 31, 2021. Diagnosing Herbicide Injury course has been approved by the California Department of Pesticide Regulation (DPR) for 1.5 continuing education units (CEU) of Other, Certified Crop Advisor (CCA) for 1.5 units (IPM), and the Arizona Department of Agriculture for 1.0 Credit. Example screen from the course

If you are a DPR license or certificate holder with a last name beginning with letters M through Z, then this will be your year to renew. Now is a good time to check out the other UC IPM online training courses offered. All are 50% off the regular price through October 31st. DPR strongly suggests returning renewal packets back to them by October so that your license or certificate can be renewed before it expires. Many of our courses are accredited by DPR for continuing education hours and also by the California Structural Pest Control Board (SPCB), Certified Crop Advisor (CCA), the Western Chapter of the International Society of Arboriculture (WCISA), and the Arizona Department of Agriculture.

Invasive shot hole borers (ISHB) are tiny beetles that are posing a significant threat in Ventura County and beyond.

These pests are becoming established in parts of Ventura County. Farnsworth and Oliver note that "Unlike many insect pests, invasive shot hole borers infest a wide variety of tree species, including many common ornamentals, avocados and California natives. Sycamores and box elders are among their favorites, and they also attack live oaks, valley oaks and alders, all of which are abundant in our area."

"two closely related species of small, non-native, beetles that bore into trees. ISHB introduce fungi that cause a tree disease called Fusarium dieback (FD). The ISHB-FD pest-disease complex is responsible for the death of thousands of trees in Southern California and poses an imminent threat to the integrity of our urban and natural forests.

You can learn more about ISHB at the UC ANR Integrated Pest Management website.

As Julie Di Blasio reported last year, "...invasive shot hole borer (ISHB) infestations have been identified in Ventura County since 2015 but have not significantly spread. Discovery of the pest/disease complex was found in late 2018 in the urban forest of Meiners Oaks. Citizens Journal recently published an article about the removal of a tree that was at risk for amplifying the local infestation and causing potential other community harm." 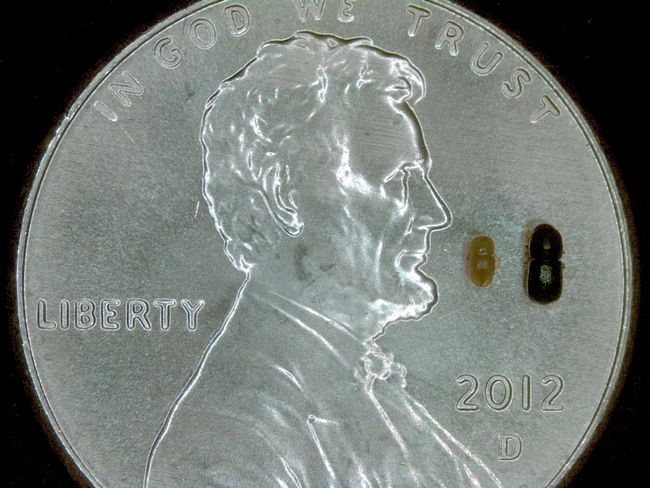 In this blog series, Dr. Annemiek Schilder, Director, UCCE Ventura County and Hansen Agricultural Research and Extension Center, shares her observations about the natural world across the seasons. As she says:

The other day I spotted a gorgeous red dragonfly in my garden. He – yes, it was a male - cocked his head towards me several times and studied me with his big compound eyes as I inched closer to take a picture. He waited patiently while I tried to get him into focus, then eventually flew off. The flame skimmer dragonfly (Libellula saturata) is common in California and the Western US. Males have an orange-red body with orange sections on the wings, whereas the female is paler with an amber tinge along the upper edge of the wings.

Dragonflies speak to the imagination with their bright colors, transparent lacy wings and aerial acrobatics, inspiring poets and artists through the ages. They are often seen as a good omen and a source of comfort during times of loss. In Japan, the dragonfly is a symbol of strength, courage, and happiness whereas to Native Americans, dragonflies signify change, transformation and healing.

Dragonflies belong to the insect order Odonata, which means “toothed”, for their serrated mandibles − entomology-speak for jaws with teeth-like projections. Adult dragonflies feed on soft-bodied insects such as mosquitoes, flies, moths, butterflies, and flying ants, ambushing them in mid-flight. They have almost 360-degree vision due to their huge compound eyes and can see many more colors than humans can. Dragonflies are amazing flyers, achieving speeds over 30 miles per hour, and are able to fly forwards, backwards and remain stationary with the help of flight muscles that control each of the four wings separately.

The flame skimmer dragonfly is mostly found near warm ponds or slow-flowing streams. In colder regions they are a common sight around hot springs. The larvae, also called nymphs or naiads, spend 2 or more years living in shallow water where they feed on mosquito larvae and other aquatic insects, small fish and tadpoles. In order to grow, they have to molt (shed their skin) multiple times. Adult dragonflies emerge in the spring and live for about 6 months during which time they have to find a mate. As I was observing two flame skimmers chasing each other, I was reminded that dragonflies can be fiercely territorial. After mating, the female lays her eggs by dipping her abdomen repeatedly in the water while hovering above the surface.

Watch the life cycle of dragonflies in this National Geographic video.

Fireworks in the Garden: Octopus Agave

Photo by Sensei Minimal on Unsplash 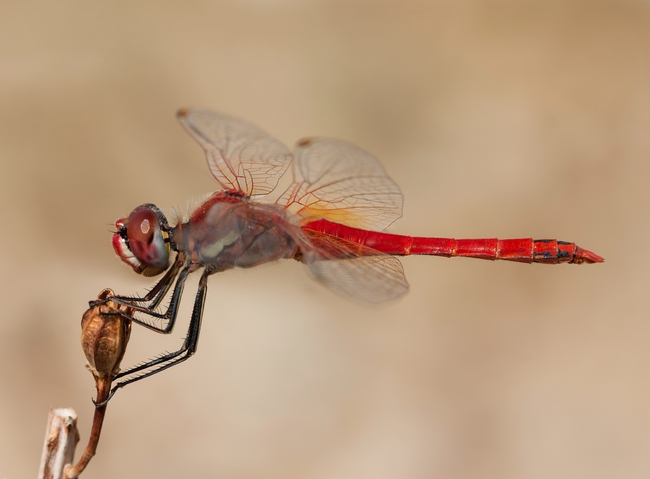