UC Cooperative Extension will host a field day at the USDA-ARS Spence research farm to show a field trial evaluating water use in drip irrigated celery.  This is an opportunity to see first- hand the effect of water management on celery growth.   We will discuss using weather data for scheduling irrigations using the CropManage online tool, water application monitoring using flowmeters, soil moisture monitoring using tensiometers, and the feasibility of improving irrigation scheduling using satellite-based tools.  This is a joint project among UC Cooperative Extension, CSU Monterey Bay, NASA-Ames, and the USDA-ARS. The project is funded through the USDA-Specialty Crop Grant Program, administered through CDFA.    Cooperators include Dole Fresh Vegetables, Inc., and Wilbur Ellis.

Location: The trial is located in a field adjacent to Spence Rd.  Enter the ranch from the west side of Old Stage Rd. Turn right at the water reservoir and drive to the end of the road. The western tarnished plant bug or commonly referred as lygus bug (Lygus hesperus) has emerged as a serious pest of celery in the Central Coast. The mouthparts of lygus bug, often referred as piercing-sucking, consists of four stylets. Lygus bug uses these stylets to probe host plants and feeds on the plant fluids. When lygus bug feeds, it inserts the stylets into the injured site. Once stylets are inserted, they pre-orally digest the meristematic tissue and the slurry of digested tissue is ingested.

Injury caused by lygus bug on celery seedlings and mature plants is not completely understood. Red to brown elongated lesions are suspected as to be lygus bug feeding injuries on both young seedlings and mature plants. Also, in the greenhouse, celery seedlings suffer severe stunting or poor plant growth which is often suspected to be attributed to lygus bug feeding injury. Thus, a study was conducted in 2015 to confirm injury caused by lygus bug.

In Central Coast, lygus bug develops on weed hosts such as wild radish,common groundsel,lupines , milk thistle and mustards (Brassica spp.) surrounding the production fields, ditches, and roadways (Zalom et al. 2012). As weed hosts senesce, lygus bug adults tend to leave them, seeking food, water and shelter elsewhere including seedlings in greenhouses and mature plants in fields. The invading female lygus bug settle on celery plants to feed and lay eggs. A lygus bug female lay 161 eggs (mean) at 80 F (Mueller and Stern 1973). Lygus bugs on celery are primarily managed using pyrethroid (such as permethrin or zeta-cypermethrin) and carbamate (methomyl or oxamyl) insecticides. Thus, proper early diagnosis of lygus bug feeding injury is critical in determining the need of insecticide use and application timing for its control.

Thus, egg laying on petioles can develop into elongated lesions. Monitoring greenhouse or field is critical to reduce establishment of lygus bug population for a timely management. Feeding injury can develop if the plants are not managed after detection of incoming adults in the greenhouse. Growers often see a lot of lygus bug nymphs which suggest that adults already moved in and laid eggs. 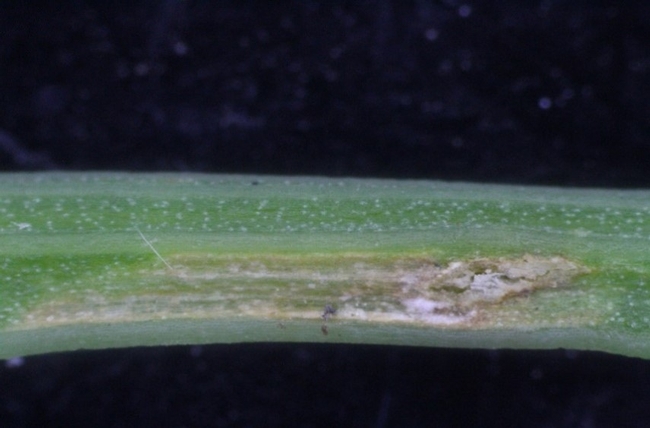 Lygus bug, Lygus hesperus feeding could cause economic damage to celery. Like any other true bug, lygus bug has a piercing and sucking mouth part which appears as a snout-like structure or beak on the head. Within the beak, four stylets are housed which come out while the bug feeds on the plant. In the process, stylets puncture the cells and leave a feeding sheath within the plant (Figure 1a and b). As time progresses, these injured tissues, depending on the severity, turn into sunken or elongated lesions or callus on the stem making the celery unmarketable (Figure 2).

Figure 1a and b. Lygus bug feeding sheath. 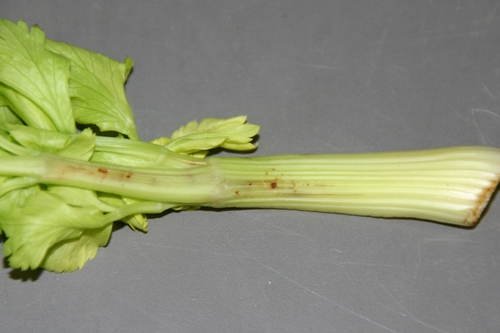 Since 2002, a severe leaf spot disease on parsley has occurred throughout central coastal California and particularly in Monterey County. Three different bacterial pathogens (Pseudomonas syringae pv. apii, P. syringae pv. coriandricola and an organism very closely related to P. viridiflava) have been associated with these outbreaks on parsley. Of interest to researchers and of potential importance to growers is the fact that two of these bacteria were already causing problems in coastal crops. Pseudomonas syringae pv. apii is the causal agent of northern bacterial blight of celery and P. syringae pv. coriandricola causes bacterial leaf spot of cilantro. Symptoms of all three diseases are similar and consist of small (usually less than ¼ inch in diameter) leaf spots that are noticeably angular in shape, with the edges of the spot restricted by leaf veins. The color of the leaf spots can vary from light tan to brown to dark brown. These bacterial leaf spots penetrate the entire leaf, so that the spot will be visible from both the top and bottom sides of the infected tissue (in contrast to chemical damage or abrasion in which the symptom is usually only seen from the top side of the leaf). See photos below.

Our research team is also investigating a possible new bacterial disease on fennel, as well. Because of these developments on commercially grown plants in the Apiaceae, we are seeking additional samples of foliar problems from any member of the Apiaceae crop group: celery, cilantro, dill, fennel, parsley, and others. Further clarification of the relationship between these various bacterial pathogens, determination of which hosts are susceptible to which pathogen, and other aspects may assist industry in managing these diseases.