In 2017, two rice fields were identified with an unknown watergrass biotype (or species) that looked very different than the three main known species that infest California rice fields (late watergrass, early watergrass, and barnyardgrass). Both fields had... 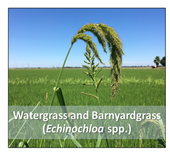 Weeds are important pests of California... 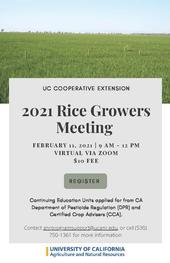 Where: Virtual via Zoom

New/Unknown watergrass biotype in the field.

In 2017, I started getting reports of a watergrass biotype/species (Echinochloa spp.) that was difficult to control using our suite of herbicides registered in rice. At the time, I knew we had multiple herbicide-resistance in late watergrass (Echinochloa phyllopogon), so I initially just thought the resistant biotype was spreading, and had maybe gained resistance to additional herbicide modes of action. However, once I started visiting fields, it quickly became apparent that this was not late watergrass (phenotypically-speaking). It also did not appear to be barnyardgrass (Echinochloa crus-galli), although the Echinochloa species are notoriously difficult to identify, and phenotypically quite variable in...