Plants: What Do They Know?

Do plants see, smell, feel, hear, remember and know where they are?

These are some of the questions that Daniel Chamovitz who has a PhD in genetics writes about in his book “What a Plant Knows”. One of the discoveries scientists found in their research, was that plants and animals have some of the same genes as humans DNA.

Do they see? Plants do not have eyes like animals or humans, but according to some researchers they see when it’s light and when it’s dark, they seem to sense which side the light is coming from. Could that explain why they grow towards the light? What about plants that grow in the shade, do they wilt and die because of the light? My question is how does this explain night-blooming plants, where there is only a street light or the moon for light? How do they know it’s time to bloom or when night comes? Is this the sense scientists are talking about?

Do plants smell odor?  We know that they are a lot of plants that have  odor, roses, sweet peas, society garlic to name just a few, but some scientist studies show they can smell odors from plants near them as well as their own aroma. These scientists also think they can sense when their or their neighbor’s fruit is ripe.

Do they feel? Some say yes they suggest they can tell the difference between hot and cold, when something brushes them, the wind, animals or humans. Researchers also think plants are more sensitive to touch then we humans are. The slightest touch will cause some to close their leaves.

Can they hear? On this question there is little credible research that they hear, or if they do how they respond to sound.  Yet we have all heard that talking to plants helps their growth. Is this a myth?  Even biologists Charles Darwin, played his own bassoon to see if his mimosa plant (Mimosa pudica) would close- when it didn’t he called it a “fools experiment”.

Do they remember? Some of the plants memory faculties are the same as humans, but they don’t have memories like we do, they don’t remember sunshine or drought, but in their own way they do retain some past events such as any damage done to them by insects or humans.

This is a very interesting book that I only touch the surface on, but for plant lovers it has a lot of information from the author and researchers on if plants see, smell, feel, hear, and remember. 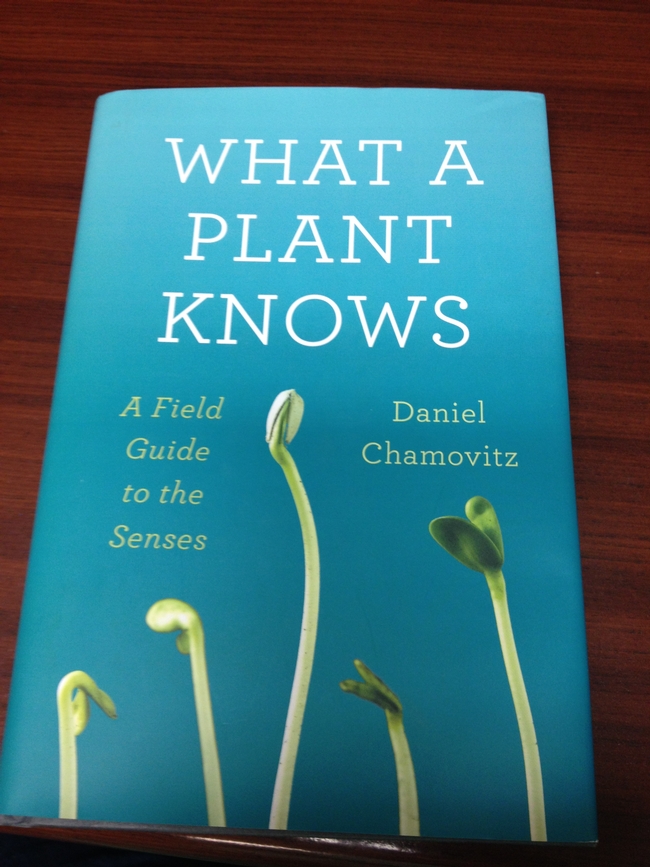 Just this week, the Master Gardeners pulled off an amazing feat. They worked on 3 gardens at the Solano County Fair: an entry way garden, a competition garden, and then a last-minute garden.  It was quite the undertaking, but very rewarding in many ways.  The gardeners are by no means professional landscapers or designers. They just love plants and putting them together in a landscape.  In three days they made the gardens beautiful for the public to enjoy!

The competition garden we entered for the Amateur Gardens was called “Home Tweet Home”.  The focus was on the houses of birds, insects, and bats that might be enticed to your yard.  There were plants that attract certain insects, a water feature and a small lawn area.

I want to back up a little and tell you how the Master Gardeners got involved at the fair.  About 4 years ago, the Master Gardeners were asked to design an entry way garden for the Twilight Theater, the location of the gardens competition.  The following year, they decided to enter the Amateur Gardens competition for kicks.  Apparently the judges liked their gardens because they have won for the past three years including the 2012 fair.

Every year, the Master Gardeners put forth design ideas, one is selected, and then, with help from the membership, implement of that design.  This year, Carolyn Allen created the design themed “Home Tweet Home” (the fair’s theme was “Home Sweet Home”) .The ‘box’ they have to plant in has dimensions of 8’ wide by 16’ long.  You might think this is a lot of room to work with, but once you’re there working in the box, it seems much smaller.

There is a lot of planning involved and the Master Gardeners seek help from one another and also look outside the organization to get the materials they need.  It is a hectic, but fun event that they love doing year after year.  Congratulations to the UC Master Gardeners of Solano County on their first prize at the fair! 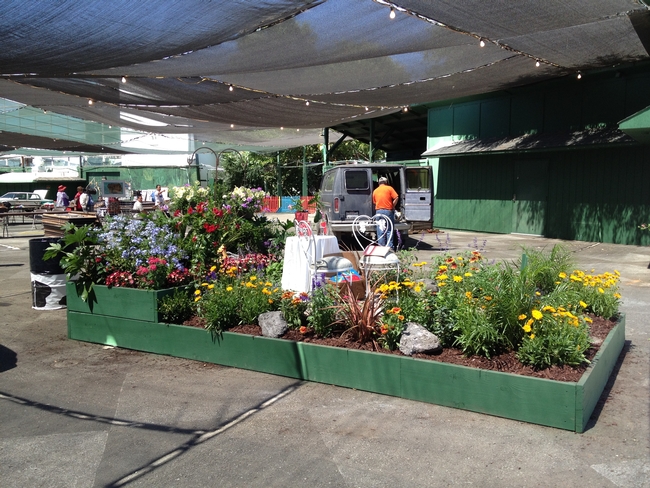 Side-view of the entry way garden in the Twilight Theater. (photo by Jennifer Baumbach) 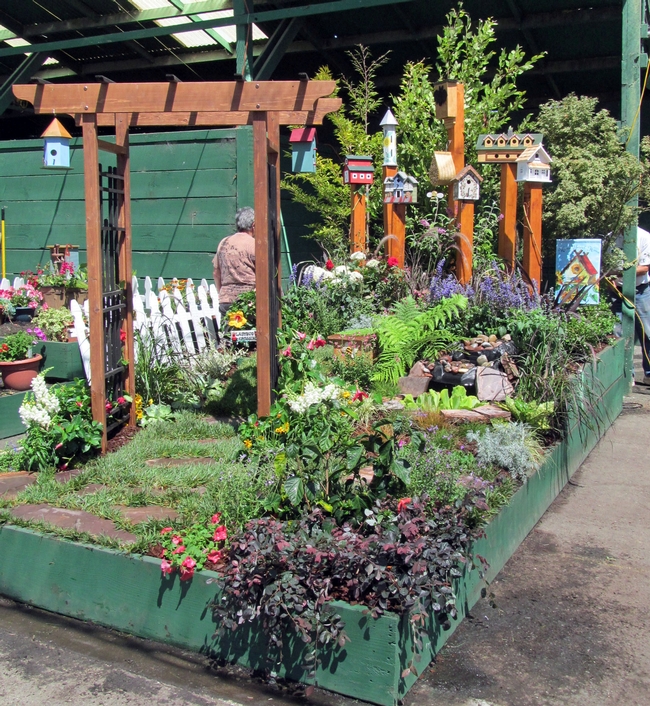 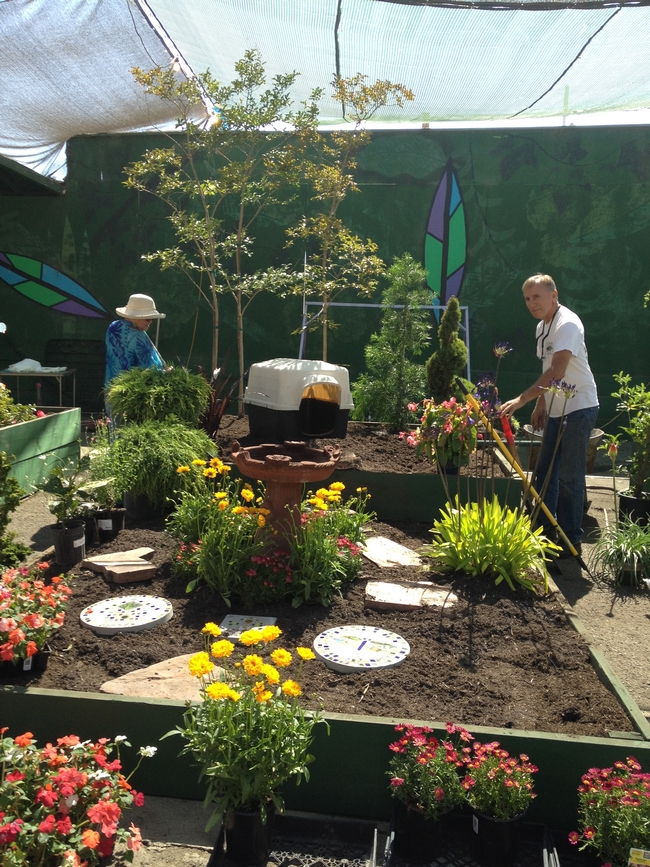 Soil texture is an important factor in determining the success of your gardening venture.  Texture is determined  by the proportions of sand, silt, and clay minerals of your soil.  Clay, predominate in this geographic area, is very fine-textured, and referred to as a 'heavy soil'.  Clay has one thousand times more surface area per gram than silt, and almost a million times more surface than course sand.

Sandy or silt loam is said to be the best soil for home gardening, as this provides a mixture  that retains water and is able to percolate and infiltrate.  Clay can become hard as rock and does not drain well.

Several things can be done to deal with our clay.  One is to add raised beds to your garden, bringing in good loamy soil from a reputable source, and placing it on top of existing soil, where you want to plant.

Secondly, you can amend your existing clay soil with organic materials.  Two common methods for doing this are: one, to add compost to soil and work it in.  This is best done with hoes and or shovels, as tilling can destroy living organisms, such as worms, which are most beneficial to the garden.  Severely compacted soil may require tilling.  Of so, till down 10-12" deep.   Allow soil to dry out--two to three days prior to adding amendments.  Remove rocks, roots and debris.  Break up any large clods with a hoe.  Place two to three inches of compost on the area and work in.  Do not do this when the soil is too wet or to dry.  Peat moss would work as an amendment, but is expensive.  Compost and well rotted manure both are organic and ideal for garden plots.   A second method  is to cover the area with 4-6" of rotten hay or straw and let it sit for up to a year, as this will slowly break down the soil.  Easier on the back but takes much more time.

A third approach is to accept the clay and plant items that do well in that texture of soil.  Here is a partial list of some flowers that actually will do fine:  Black-eyed Susan, bluestar, aster, baptisia, coreopsis, purple cone flower, sea holly, perennial geranium, false sunflower, daylily, coral bells, blazing star (great for a butterfly garden), bee balm, Russian sage, yarrow, and switch grass, said to actually thrive in moist or dry clay.

So clay does not have to be a gardener's four letter word like mole, weed, or mold.  Work with it, amend it, accept it.

A trip to this cemetery makes for a very interesting day trip. This Sacramento landmark was founded in 1849 by  Captain John Sutter who gave 10 acres of land to the city as a gift to be used for a cemetery.  You will find John Sutter’s grave there as you enter the grounds.

The interesting thing about this cemetery is that the grounds are done in the style of the Victorian gardens that were popular when it was first established.

As you wander around the grounds you will see a variety of trees and plants.  There are cypress, palm, redwood and oak trees. You will find lavenders, bottlebrush, daylily, iris, oleander, oak leaf hydrangeas, penstemons and so much more.

The most popular garden is the Old World Rose Garden. The Heritage Rose Group has been collecting, maintaining and planting these rose’s some dating back to the 1850’s. There are rose’s there that have been found in the foot hills, and old mining towns. Unfortunately, we were to late to see them in bloom, as most true old world rose’s bloom only once.  The best time to see them I think would be in late April or early May.

Most of this cemetery is divided into sections, such as the Old Soldier’s plot, the Grand Army Plot, remember it is an old cemetery.  In the Pioneer Gardens, all the plants there were said to have grown in the pioneer days.  Here you will see geraniums, and grasses in this section. 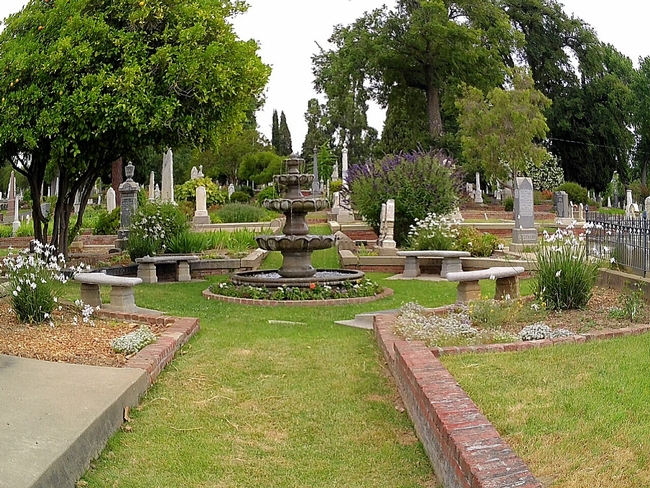 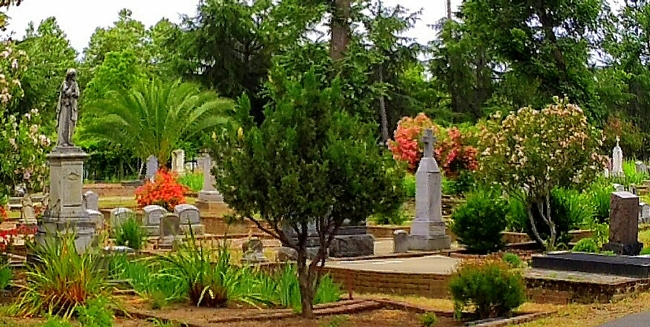 Just this week it was announced by the Solano County Agriculture Commissioner, Jim Allan, that the northwest portion of Solano County is being inundated with grass hoppers.  The area under attack is from Cherry Glen to the county line.  There are people reporting the presence of a large number of grasshoppers eating their plants.  Samples of the pest were taken for identification, but it's thought these grass hoppers are the Devastating Grasshopper or another grass hopper that is closely related.

So far, the pests aren't bothering the farm crops, but unfortunately are causing significant damage to homeowners plants. Grass hoppers will basically eat any plant that is in their wake.

The grass hopper is difficult to control, and only licensed professionals can use the pesticides that might control them.  It's basically turned into a waiting game until they are done with their life cycle.  There is more information on the UC IPM (UC Integrated Pest Management) website about grass hoppers, click here for that information.  Here is a link to a printable handout with information about the biology and control of the pest.

So be on the lookout for this pest and good luck! 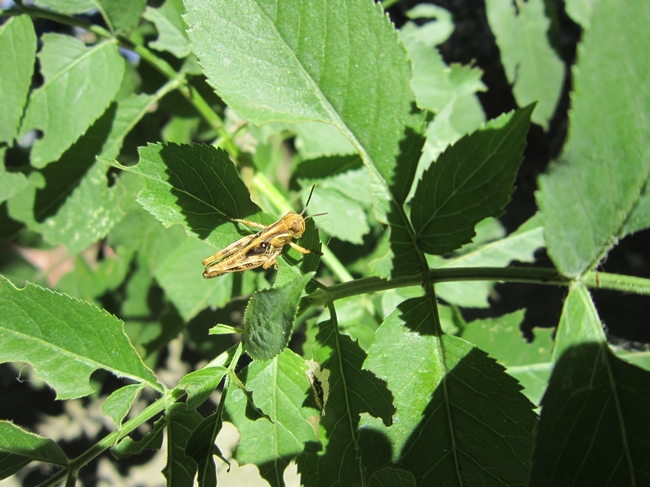