As a population's wealth rises, so does the demand for products produced in animal agriculture industries.

California agriculture is poised to match the growing demands of the world's booming population and expanding wealth, concluded AgAlert editor Ching Lee in her story about the California Ag Summit last week at UC Davis.

Asking where agriculture is heading requires considering the forces that are driving both the supply side and the demand side, said Daniel Sumner, director of the UC Agricultural Issues Center.

As people's incomes go up, they tend to demand more dairy and meat products. California leads in U.S. dairy production, Sumner noted, and other agricultural sectors are linked to dairy, such as alfalfa and other feed...

Piled on a football field, California's almond crop would reach almost as high as the Empire State Building.

"There are two things going on," he said. "We have improved the nature of the orchards, both in the way that we plant them and the varieties and the like. And there's a lot more acres."

In the last decade, low cotton prices prompted many farmers in the southern San Joaquin... 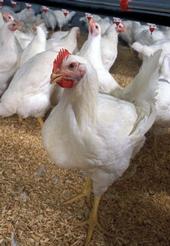 The price of chicken will likely rise.

Soaring feed costs are forcing San Joaquin Valley poultry producers to cut costs, raise prices - and, in some cases, close their doors, reported Robert Rodriguez in the Fresno Bee this weekend. Feed prices have climbed as much as 50 percent since last year, fueled by the increasing demand for corn.

Director of the UC Agricultural Issues Center Daniel Sumner told the reporter that rising costs for poultry producers will boost the retail price, unless something else acts to keep prices down.

"So, bottom line," Sumner said, "we should see higher retail prices with these...

CDFA secretary Karen Ross and public relations executive Kerry Tucker suggested in an op-ed published yesterday in AgAlert that the best way to meet future international opportunities and challenges in agriculture is with a collaborative and harmonious industry.

The article included information about anticipated global demographic changes from the UC Agricultural Issues Center. According to the AIC, China will more than triple its per capita income by 2030, from $2,802 to $10,718. This kind of wealth tends to result in first-step dietary adjustments that include more consumption of meat, dairy products, fruits, vegetables and...

American dairy operators are asking the Obama Administration to protect them from an increase in New Zealand dairy exports to the U.S., according to an article in yesterday's Wall Street Journal. But Daniel Sumner, director of the UC Agricultural Issues Center, believes the American farmers' worries are overblown.

"They're making wild claims," Sumner was quoted in the story.

Obama's trade negotiators begin talks next week in Australia on a regional trade agreement that may make it easier for New Zealand dairy operators to...