The New York Times reported on a heated debate on the Big Island of Hawaii late last year about a proposed law that would ban the production of genetically modified organisms by farmers in that part of the island state.

The story describes a lone councilman's effort to get science-based information in face of vocal opposition to GMOs among advocacy groups. The lack of input from farmers and scientists on policy issues that affect food and farming has rankled many agircultural scientists, including Pamela Ronald, professor in the Department of Plant Pathology at...

Almost any food in the grocery store that comes in a box, bag or can and is not organic probably has some genetically engineered content, according to an article in the Sacramento Bee about the potential ramifications of Proposition 37.

If the proposition passes in November, the packaging of most foods with common ingredients like corn syrup, sugar, canola oil and soy-based emulsifiers will declare that they contain ingredients that have been genetically altered.

Biotech crops are so commonplace in the United States that about 90 percent of the nation's corn and soybeans are genetically engineered, the Bee reported. For that...

Proposition 37 would result in $1.2 billion in higher costs for farmers and food processors, higher prices for consumers and new regulations, according to an article published in Western Farm Press that refers to a new UC Davis study. The article is credited to the No on 37 campaign.

If passed, Proposition 37, which is on California's November ballot, would require labeling of genetically engineered food.

“The proposed regulations have no basis in science and impose rules that would have significant...

Currently, GMO labeling is not required in the United States. Some manufacturers label foods that do not contain GMOs.

Alison Van Eenennaam, UC Cooperative Extension specialist in the Department of Animal Science at UC Davis, commented on a KCRA news segment about Proposition 37, an initiative on California's November ballot that, if passed, would require special labeling on products that contain genetically modified ingredients.

"All of the data that's come out from the American Medical Association and National Academy of Sciences have all agreed that the food products on the market today that are... 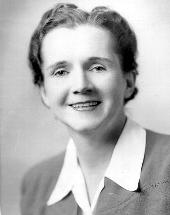 Rachel Carson in her Fish and Wildlife Service employee photo.

Rachel Carson, the author of "Silent Spring," a book credited for advancing the environmental movement in the U.S., would have supported the use of genetic engineering in agriculture, says Pamela Ronald, professor in the Department of Plant Pathology at UC Davis. Ronald considered the possibility in an op-ed article published in Forbes.

Carson envisioned harnessing the knowledge of biological diversity — entomology, pathology, genetics, physiology, biochemistry and ecology — to shape a new science of biotic controls that would help...