California growers can download a new series of publications summarizing efficient nitrogen management practices from UC Agriculture and Natural Resources. The publications are designed to assist growers in complying with state regulations for tracking and reporting nitrogen fertilizer applied to crops, in an effort to prevent nitrogen from leaching into groundwater. 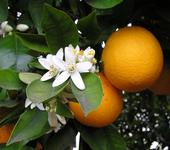 A lack of winter chill can increase the number of pistachio blanks. (Photo: Wikimedia Commons)

Some California pistachio farmers are facing one of their worst harvests ever, reported Sarah Zhang on Wired.com.

UC Agriculture and Natural Resources experts said the dip in yield cannot be blamed on the drought, but a warming climate may be coming into play. Pistachios require cold winter temperatures to reset their biological clocks.

“They use the temperature to know when winter is over,” said Craig Kallsen, UC Cooperative Extension advisor in Kern County. “And if they don't get the message, they get confused.”