UCANR: Promoting economic prosperity in California
Agriculture to take a hit, but people still need to eat during coronavirus crisis
Published on: March 17, 2020

High-end wine sales will likely be hurt by restrictions in place to curb the coronavirus. (Photo: Pixabay)

The shut downs and self isolation sweeping across the country to curb the spread of coronavirus likely will not impact agricultural staple foods, but high-end wines and specialty ag products grown in California may suffer, reported Tim Hearden in Western Farm Press.

He said some California agricultural products see demand increase during tough economic times, such as less... 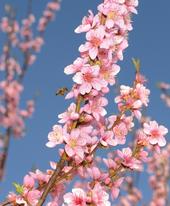 Farmers may not agree with new regulations intended to reduce greenhouse-gas emissions seen as accelerating climate change, but they share an interest in preparing for the changes ahead, the article said.

California winemakers are concerned about new Chinese tariffs on wine imports, even though per capita consumption of wine in the country remains low. 'It's all about the future,' say UC ANR experts. (Photo: UCCE Mendocino County)

China imports quite a bit of wine, however, very little comes from the United States. At the same time, per capita consumption of wine in China remains very low. So why are California winemakers anxious about tariffs newly imposed by China on U.S. wine? Because China's wine consumption habits are expected to change, reported UC ANR experts in an article posted on The Conversation and NPR websites.

"China is the world's fastest-growing wine market and is expected to soon become the second...

Almonds could be among the crops hit by Chinese tariffs in retaliation for U.S. tariffs on steel and aluminum.

China has threatened to impose retaliatory tariffs on American exports following President Trump's plan to impose tariffs on steel and aluminum imports. Agricultural exports are in the crosshairs, reported Thaddeus Miller in the Merced Sun-Star.

China's tariffs would first hit U.S. products such as avocados and nuts with 15 percent duties, the article says.

"It doesn't really matter which one it is, whether it's alfalfa, almonds or wherever it may go," said David Doll, UC Cooperative Extension advisor in Merced County. "They're as much political as they are anything...