The beverage industry is recruiting low-income and minority groups to help share a message aimed at tanking soda-tax measures in Oakland and San Francisco, reported Winston Cho in the East Bay Express.

The industry has poured in $13 million to fight Oakland's Measure HH and San Francisco's Proposition V, the story said. The groups supporting the measures have received contributions of nearly $4 million, making Measure HH one of Oakland's best-funded initiatives ever.

The American Beverage Association is positioning the tax measures as "grocery...

"It's a victory for consumers. The impact is going to be incredible," said Pat Crawford, director of research at UC ANR's Nutrition Policy Institute. "It's something in the nutrition field we've waited for years and years: to educate the public on how absolutely critical added sugar is and about the risk of heart disease, diabetes, obesity and dental... 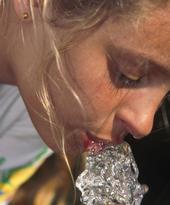 UC Cooperative Extension nutrition researchers are in the process of selecting five schools each from Shasta and Butte counties to pilot a nutrition and extension program that university researchers will study to learn how to motivate kids to choose healthy habits, the Redding Record Searchlight reported.

The project is funded with a $500,000 grant from UC Agriculture and Natural Resources.

"We are going to support the school(s) to develop a stronger wellness program that rewards healthy eating and physical activity," said Concepción Mendoza, UCCE advisor in Shasta...