UC looks into a 'healthier' way to use tobacco
Published on: March 4, 2013

Some bacteria and algae turn sunlight...

The genetically modified Flavor Saver tomato was a marketplace flop.

Food created through genetic engineering and conventional breeding are safe and they deserve equal treatment in the marketplace, a UC Berkeley biotechnology expert told reporter Lisa Krieger of the San Jose Mercury News.

Peggy G. Lemaux, UC Cooperative Extension specialist in the Department Plant and Microbial Biology at UC Berkeley, says fear of the unknown can stop genetic engineering from helping consumers. She genetically engineered wheat to produce grain that is less allergenic and might be better tolerated by people...

UC Davis plant pathologist Pamela Ronald appeared on the Dr. Oz television show, in which the medical personality promised to tell his audience what they need to know about GMOs.

Ronald was one of three guests, and the only one to support the production and consumption of genetically modified food.

"It was a tough go," Ronald wrote in a Tomorrow's Table blog post about her television appearance. "I did my best to refute the worst 'woo woo pseudoscience,' but it was...

Feral canola is growing on North Dakota roadsides.
Canola that is genetically modified to be resistant to two herbicides is growing along roadsides in North Dakota, according to a New York Times blog post by Andrew Pollack.

Even though critics of biotech crops point to the situation as "gene pollution," Pollack said the finding may not be a problem at all. And if it is a problem, he wrote, "It’s because a canola plant growing outside of a canola field – on a road or in a field of wheat, for example – could be considered a weed."

The study, presented at a recent meeting of the Ecological Society of America, is based on a sampling of 604 canola plants collected by a University of...
Read More 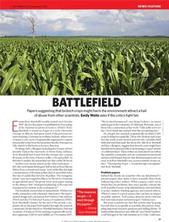 "Battlefield" was published in Nature.
One Friday afternoon in 2007, two UC Riverside scientists went out for a beer after work and comiserated over a research report published in the most recent Proceedings of the National Academy of Sciences.


"I don't think there's been another case where I've seen him so really ticked off," said insect pathologist Brian Federici of his colleague plant biotechnologist Alan McHughen.

Federici said he was also annoyed by the article, which he called "bad science."

The scientists' frustration led to the creation of a rebuttal letter that was eventually signed by the duo and 10 other scientists and published in the January 2008 edition of PNAS. This letter and other dissent from scientists...