The California drought will cost the state's agriculture industry about $1 billion in lost revenue, reported David Pierson in the Los Angeles Times. Total statewide economic cost of the drought was calculated to be $2.2 billion.

The story was based on a report released Tuesday by the UC Davis Center for Watershed Sciences. The 2014 drought, the report says, is responsible for the greatest water loss ever seen in California agriculture - about one third less than normal.

A key concern is the loss of agricultural jobs, said lead author

Reduced water allowances for farmers could mean layoffs and other economic impacts, says an article in the Wall Street Journal by Jim Carlton.

The article reported that some farmers have been told to expect just 30 percent of their allotments. In response to water cutbacks, many farmers must reduce planting and leave some fields fallow.

The article referenced a UC Davis study, co-authored by Richard Howitt, of 2009 water cutbacks that resulted in "285,000 acres going fallow and... 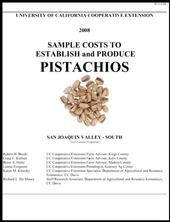 Consultant Dennis H. Tootelian arrived at these figures using data from the Census of Agriculture, USDA, CDFA, and the University of California Cooperative Extension's Sample Costs to Establish and Produce Pistachios, according to a