Tens of thousands of mature date palm trees have been transplanted from fruit-producing orchards in the Coachella Valley into urban coastal Southern California landscapes. (D. R. Hodel).
From lemons to loquats, it's common to see fruit trees with an abundant, but unpicked, harvest. Urban fruit often goes to waste, whether on a neglected backyard tree or in a public setting. Under-utilized urban fruit trees have gotten some attention in the Los Angeles area in recent years, with projects like Fallen Fruit, a collective that maps fruit trees growing in public spaces, and Food Forward, a non-profit that harvests unwanted fruit and donates it to food banks.

One fruit, though, is not on the radar of foodies and foragers. Yet it's crunchy, sweet, flavorful, often seedless, and very common in Southern California landscapes. It's the fruit of the date palm, rarely thought of as a food source in our urban environment, more frequently viewed as a nuisance because dates fall off trees, where they create litter that must be cleaned up. Palm trees produce abundant date fruits that fall into the landscape and become a nuisance. (D. R. Hodel).
Why do we have so much of this fruit? For the last 30 years, Southern California has seen the transplanting of tens of thousands of mature Phoenix dactylifera, the edible date, from fruit-producing orchards in the low-desert Coachella Valley into urban coastal Southern California to landscape homes, hotels and malls from Santa Barbara to San Diego.

Unfortunately, coastal Southern California lacks the high sustained heat and aridity for proper fruit maturation and curing to produce traditional soft-ripe dates of good eating quality. The dates that fall from the trees have been unattractive to gather for sale and consumption, processes that could help to resolve the fruit litter problem in the landscape.

However, some varieties of dates can be eaten at a less than a mature state, traditionally called “khalal.” Fruit in the khalal stage have attained their maximum size, are typically yellow or red, have a sweet flavor, and are crunchy, somewhat like an apple. Several date varieties, like ‘Barhee,' are sometimes sold and eaten in the khalal stage. Fortunately, from a food standpoint (or unfortunately if you are a landscape manager), date fruits do mature to the khalal stage in coastal Southern California because high sustained heat and aridity are not required to attain this stage of development.

While ‘Barhee' is not too common as a landscape subject, another variety, ‘Zahidi,' is common and typically produces abundant fruits in coastal Southern California. These golden yellow fruits are conspicuous and showy in the khalal stage, are typically on the palm for several months from late fall to spring, and are really good to eat. Also, in many cases, these fruits are seedless! (Note to horticulture geeks: date palms are dioecious - separate male and female trees - and because nearly all edible date palms in the landscape are female, their flowers were pollinated by other species of landscape Phoenix. The resulting hybrid fruits are seedless, or pollination is not required for fruit to set and develop - parthenocarpy.)

Urban foragers looking for their next food adventure, or even a potential enterprise, might want to consider taking advantage of this otherwise nuisance and unwanted fruit. Khalal fruit can be gathered from the ground and cleaned. But it is best to collect them off the palm. Cutting an inflorescence (entire fruit stalk) and lowering it carefully to the ground would be ideal. 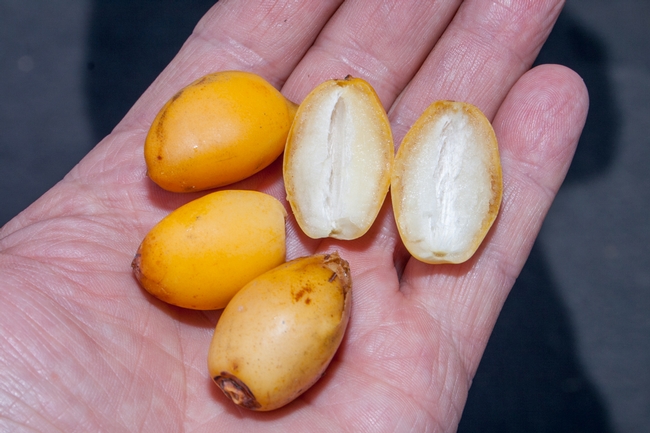 Khalal-stage fruits of the date variety ‘Zahidi’ are really good to eat: crunchy, sweet, and flavorful. Also, they are seedless (D. R. Hodel).
Tags: fruit (29), Fruit and Nut Crop (2), fruit trees (2), Horticulture (1), urban agriculture (14)
Comments: 13
Comments:
by Peg Ordway
on April 1, 2014 at 6:21 AM
What spots on back of plant leave
by Karen
on April 14, 2014 at 10:30 AM
Is the Khalil stage of dates dated raw or do you have recipe suggestions?
by Wayne Bryan Crawley
on August 24, 2015 at 5:45 PM
I see alot of date trees around palm Beach county with yellow fruit to day I say one that had alot of red fruit are they edible?
Reply by Jeannette E. Warnert
on August 26, 2015 at 1:30 PM
Our date palm expert, Don Hodel, said, "The palms might not be the edible date, Phoenix dactylifera. But if so, some varieties are generally edible in the unripe state."
by Pat
on May 15, 2016 at 12:10 PM
Maybe people here can help me?
I grew a date palm from store bought dates, it made up to 5 adult leaves, when i noticed the pot being too small. So i repotted it in a huge container.
It did not grew anymore for 2 years,
Now it starts growing again, it made a new leaf, and it is a lot smaller, the previous are twice as big.I hope he will pick up its usual growt.
I live in the netherlands and winters are too cold to put it in soil in the garden.
So when winter comes i keep it in a greenhouse at 59 fahrenheit.
The question is, is it possible to grow n nice tree this way?
I know harvesting dates wil never happen, and they become really big,but just information about how to care for P.Dactylifera is rare, i never found any, only thing i find, is info for date farming, nothingabout care for dates as potplants in colder regions.
Sorry for my elaborate story,i hope it is not full of mistakes, because english is not my native language.
I am very curious, so i really hope someone has a clue about growing them in colder regions, already thanks, Pat.
by Christine Payne
on June 10, 2016 at 7:48 AM
I have a date nut palm that is around 20 ft tall and the birds have deposted tree ferns seeds in the trunk of the tree. It is completely hiding the trunk. Will this harm the tree?
by Donald R. Hodel
on June 13, 2016 at 10:21 AM
The ferns on the trunk of date palms typically do not harm the palm. They are just growing epiphytically and are not deriving or competing with the palm for water or nutrients. Some people find epiphytic plants on palm trunks to be very attractive, but it is a personal choice. If you do not like them you can remove them.
by Donald R. Hodel
on June 13, 2016 at 10:35 AM
In reply to the person growing a date palm in the Netherlands:
Yes, palms can be grown indoors in cold temperate climates like northern Europe. Select palms that grow slowly and/or do not get too big and can tolerate extended periods of low light and low humidity, like Chamaedorea (bamboo palms) and Rhapis. Date palm (Phoenix dactylifera) will grow indoors but needs lots of light, even direct sunlight, for much of the day. Consider artificial lights for additional light, especially in the winter. Keep soil evenly moist, not too wet; you can even let it dry out slightly before applying water again. Apply a slow-release fertilizer once a year. Watch for insect pests like ants, scales, and mealy bugs.
by Gelaina Lovario
on July 29, 2017 at 3:45 PM
Hello, I live in a humid and hot area on the coast of florida and i wanted to add a date palm to my backyard garden in order to harvest the edible dates. After reading this article I think maybe the humid climate here will not allow the dates to reach the nice dried-out stage as discussed in the article about California. Could I use a dehydrated machine when the dates are in the kahlal stage in order to get the results of a sweet dried date? Thank you
by Barbara Krencicki
on June 30, 2018 at 6:44 PM
I an try to find out what type of dates these are and are they edible?
Reply by Jeannette E. Warnert
on July 2, 2018 at 8:12 AM
I suggest you contact your local UC Master Gardener program for more information on your dates. Click here: http://mg.ucanr.edu/FindUs/
by Christine Payne
on October 26, 2018 at 8:50 AM
Ny datenut palm is about 30 ft tall and its lower limbs are dying. What could be the cause of this? Thank you.
by Linda L Scott
on December 21, 2019 at 10:48 AM
What variety of date fruit is seedless?
Leave a Reply: