What's that in your cornmeal?

You head for your pantry. You remember that six months ago you purchased a bag of cornmeal from a local supermarket and that you immediately emptied the contents into a glass jar with a tight-fitting lid.

You open the airtight jar and notice something strange. It's moving. Moving? Moving? Yes! It's crawling with a transparent carpet of dozens of nearly microscopic critters.

What? First, what are they? If you're like me, you grab your camera--in this case, a Canon EOS 7D with an MPE-65mm lens that can magnify an insect five times its life size--and click the shutter.

You post the photo on BugGuide.Net and request an identification.

These Liposcelis bostrychophila, or "psocids" (pronounced "so kids"), are common pests in stored grains. They're usually unseen because they're about a millimeter long--about the size of a speck of dust--and are transparent to light brown in color. They're also wingless, but can they ever crawl!

Fact is, their name, "lice," is misleading. These tiny insects are not lice; they are not parasitic. And they're everywhere. They feed on flour, cereals, grits, molds, fungi, papers, books, pollen, dead insects and the like. In fact, you've probably unknowingly eaten them--or parts of them--in your pancakes, your oatmeal or maybe even your chocolate birthday cake.

Entomologist Jeff Smith, who curates the butterfly-moth collection at the Bohart Museum of Entomology at UC Davis, took one look at the photo and commented:  "They're pretty thick in there!"

"Booklice can be scavengers and often feed on the bits of mold or fungi that grow on damp materials," Smith explained. "Very old, neglected food stuffs are also subject to them, and the key to prevention is to use food materials reasonably quickly and not store them for years, store them in a nice dry location and in airtight containers."

If you're worried about what's in your cornmeal, flour, oats, biscuit mix, cake mix and other stored foods, you can pop the contents in your oven at about 120° for a half hour, and then transfer them to an airtight container, Smith says.  "Your food should be okay--albeit perhaps containing a few dead booklice. We had them in an old bag (paper) of rice one time, and in several packages of cornmeal mix that were forgotten in the back of our cupboard."

A UC Davis colleague said he's seen them crawling in his flour, but his wife made pancakes from them anyway. No issues. No problem. "Just protein!" he chortled.

And from another colleague: "I once had an entire case of instant grits. The grits were completely factory-sealed in unopened plastic bags. I opened the bags and the grits were poured into hot water, but they would not sink and mix with the water.  Instead the grit floated on the top of the water. I opened a second bag and looked at the grits under my stereo microscope. Each and every grain of grit had two or three little six-legged creatures standing on each grit. These creatures were 100 percent transparent, the only color was in their bodies which was the same color as the grits they were eating. I opened every 100 percent factory-sealed bag, and every bag was contaminated in this matter."

"There is nothing new about insect contamination of grain products," she added. "Another personal experience was a biscuit mix. For no particular reason, I sifted the biscuit mix while making the batch of biscuits. After sifting several cups of biscuit mix, in the sifter screen there were 4 worm-like creatures about the diameter of a standard pencil and about an inch long. These worms were 100 percent transparent, each filled with the white biscuit mix. "Consider we all eat insects, spiders, and urine and feces of all sorts of animals."

We live in world where we all eat bugs, whether we know it or not. Sometimes we may not want to know!

And the next time, you're yearning to make Grandma's Southern Cornbread, you might want to check for bugs first. Or maybe not. You might not want to know! 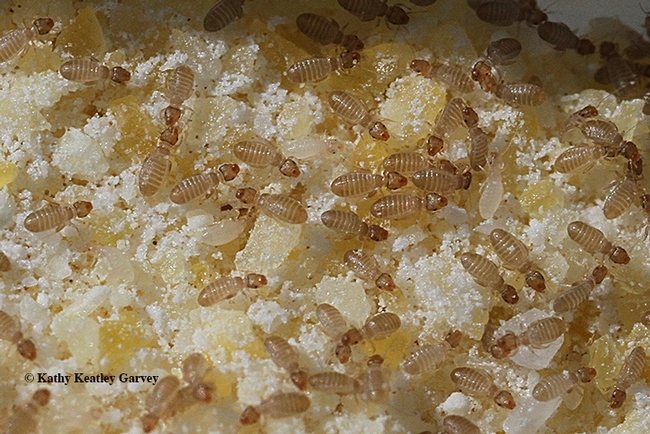 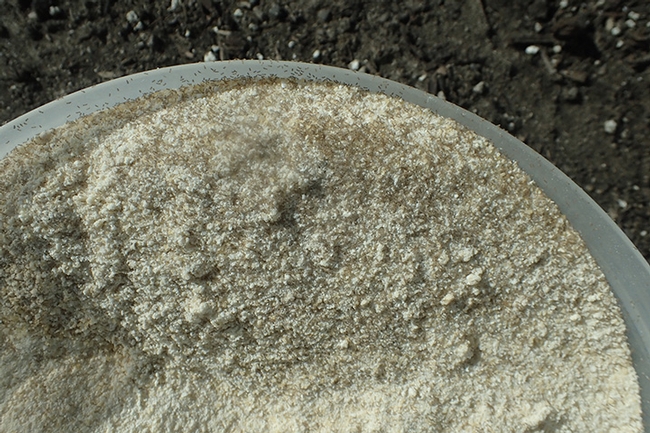 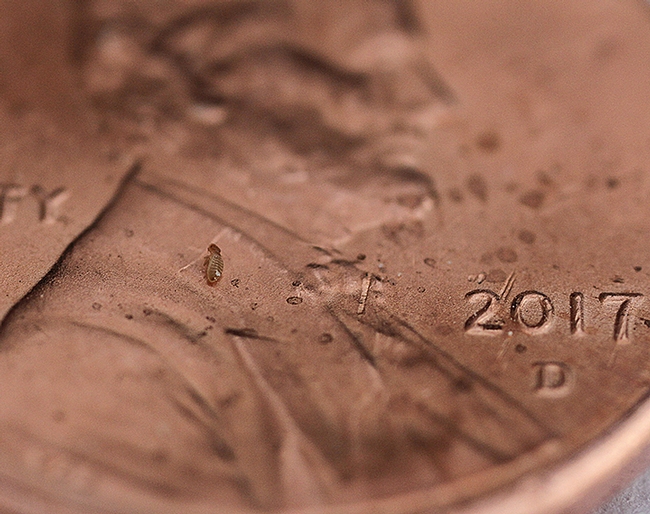 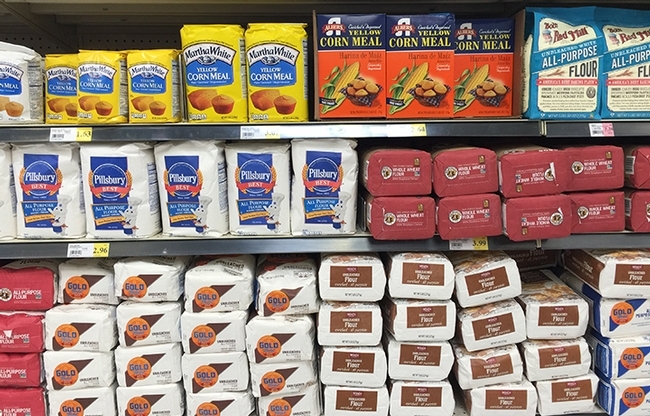 Odds are that the flour, cornmeal and other stored products you buy in a grocery store contain insects parts or nearly microscopic insects. It's estimated that the average American unknowingly eats one to two pounds of insects or insect parts a year. (Photo by Kathy Keatley Garvey)
Focus Areas:
Focus Area Tags: Family, Food, Pest Management
Tags: biscuit mix (1), Bohart Museum of Entomology (1), cornmeal (1), FDA (2), flour (1), Jeff Smith (1), Liposcelis bostrychophila (1), Lynn Kimsey (1), oats (1), stored grain pests (1)
Comments: 8
Comments:
by Janice VanCleave
on July 20, 2019 at 10:41 AM
I love this article. While I do not purposely catch insects and eat them, I do not discard meals that have critters. In fact, as a science instructor and writer, I sift old bags of cornmeal and look for the different stages of insect metamorphosis. The mummy looking pupae stage is actually very cool looking! To prevent the growth and reproduction of critters in meals, store them in the freezer or refrigerator. This is where I keep my flour and cornmeal--unless I need the bugs for a science investigation. Don't worry about those bugs. Sift the flour or cornmeal to remove visible adults, and forget about what you can't see. There is no way to remove insect eggs from packaged grains. They do add protein to your foods.
by MJ Alward
on February 23, 2020 at 2:06 PM
Thanks for this article! I had found these bugs in a container of whole oats, and then in an UNOPENED container of whole oats, but had no idea what they were. At least now I know. I also know better than to buy the large container of oats because it tends to sit in my pantry for months. Going forward, I'll buy the smaller container. I may also begin storing it in the freezer as I do my cornmeal.
by Barb kaufman
on June 30, 2020 at 8:21 AM
If these bugs can get into a glass jar,tight fittling lid,what next to get rid of them.put in refridgerator?
by Charlie McGrady
on September 15, 2020 at 5:24 PM
Is there a difference between weavels and booklice?
And are they safe to eat? Or should I throw the flour away? A few bugs don't really bother me as long as they're not harmful.
by Wendee Johnson
on November 7, 2020 at 8:48 AM
Great info but can I feed it to the birds
Along with egg shells?
by T
on January 5, 2021 at 6:25 AM
I understand it is not alarming to the average science guy, but does this have anything to do with the location to which you live? I have lived on Brooklyn NY for years; I have found a weevil once in my cornmeal. Now in Florida, they are in probably 85% of everything sealed. From my Honey Nut Cheerios, to rice, to grits. Is freezer storage the only option? Its hard to look past the bugs when there is an obvious mobile population in you food. Your saying sift them out, but sometimes they swarming in our grained products.
by Liz
on March 22, 2021 at 2:34 PM
T - same for me. Moved to South FL from Seattle, WA. Between the weevils and these tiny bugs, it's becoming quite the nuisance. I have purchased Oxo's stainless steel topped containers which are supposed to have an airtight effect but I don't think they are working - that, or I had transferred things into them which looked to be clear of bugs which perhaps it was not. What a pain.
by Tromick
on August 26, 2021 at 12:22 AM
Hello,

It is amazing and well prepared article. I enjoyed reading it but not knowing it! Gosh, I wish I did not see this article. LOL
Leave a Reply: