Published on: October 9, 2015
It will be a monarch-kind of day.
And why not?
Monarch enthusiasts are eagerly awaiting the "Welcome Back Monarchs Day" on Sunday, Oct. 11 at the Natural Bridges State Park, 2531 West Cliff Drive, Santa Cruz.  Some 500 monarchs have already arrived to their overwintering habitat, a spokesperson said today. The early birds--err, early butterflies--usually begin arriving in October. They overwinter until about February.  The peak season to see them? November.
Last Dec. 27 at the Natural Bridges State Park, we saw dozens of monarchs about 80 feet up in the eucalyptus trees.  When the sun broke through the trees, assorted birds targeted them, scattering them like mosaic paper kites, much to the awe and aahs of the crowd below.
So,  Sunday, Oct. 11 is "Welcome Back Monarchs Day" from 11 a.m. to 4 p.m. at the Natural Bridges State Park. There will be arts and crafts, games for the children, and music by "The Mostly Mediocre Musical Monarch Mariposas," or 5 Ms for short. You can visit  information booths and learn how to attract butterflies to your garden and how to care for them.  Day-use parking is $10. For more information about this special day,  contact (831) 423-4609 or access the Friends of Santa Cruz website.
Of course, the Natural Bridges State Park and the Pacific Grove Sanctuary are just two of the California coastal areas where monarchs overwinter. Most monarchs overwinter in Mexico's fir forests.
The Bohart Museum of Entomology, University of California, Davis, has a wealth of information about insects, including monarchs (Danaus plexippus) in its fact sheets.
Excerpts from the Bohart Museum monarch fact sheet:

"Monarch butterflies are among the largest members of the family Nymphalidae in North America. Their caterpillars store toxic chemicals called cardiac glycosides in their bodies from the milkweed they eat. Cardiac glycosides make vertebrates like us quite sick, so don't eat a monarch butterfly or caterpillar if you can help it. The chemicals remain in the adult butterfly bodies as well but tend to be concentrated more in the wings than in the body. Interestingly, cardiac glycosides seem to have very little effect on insect predators and parasites."

"The annual North American migration begins as early as August. Populations west of the Rockies migrate to the Pacific Coast with overwintering roosts along the central California coast. One of the best known of these is in Pacific Grove, California. Populations east of the Rockies migrate to central Mexico. Adult monarchs typically only live a couple of months, although they can live up to 5 or 6 months so the individuals that emerge in early summer do not migrate. Each generation takes between 5 and 6 weeks from egg to adult. The last generation of the summer goes into migratory mode. They stop reproducing and fly in a linear fashion to one of the overwintering sites. These individuals generally do not begin reproducing until the following spring in February or March when they leave these sites and move north from the Mexican site or north and east from the Pacific Coast."

Welcome back, monarchs! You're now fueling up for mass migration. 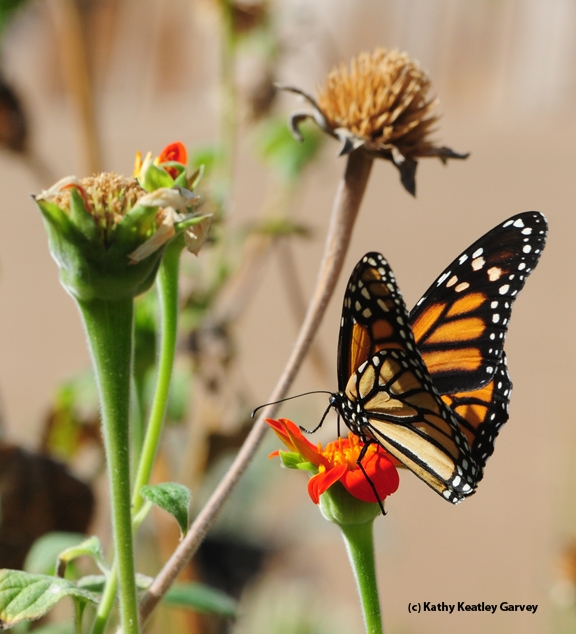 A monarch lands on a Mexican sunflower (Tithonia) in Vacaville, Calif. It may head to an overwintering site in Santa Cruz. (Photo by Kathy Keatley Garvey) 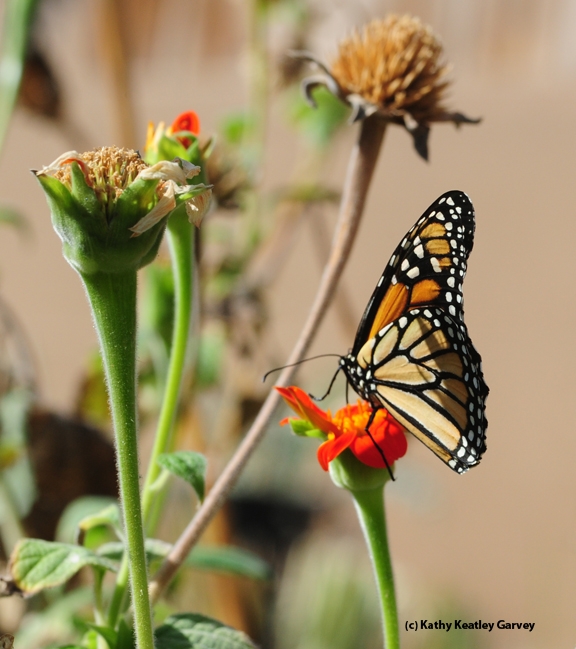 The monarch adjusts its position. (Photo by Kathy Keatley Garvey) 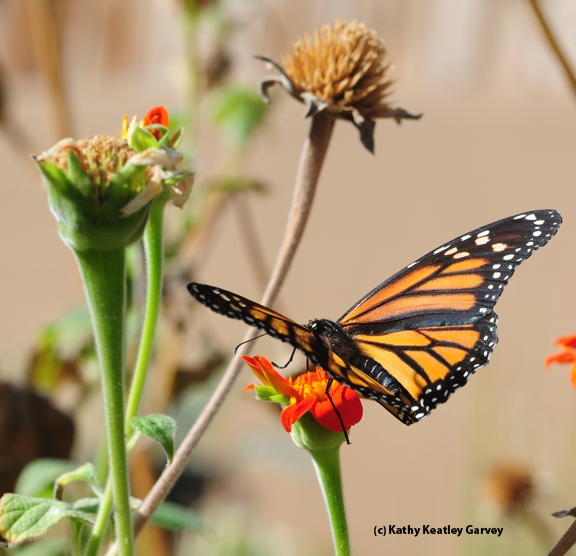 The monarch continues to feed. (Photo by Kathy Keatley Garvey) 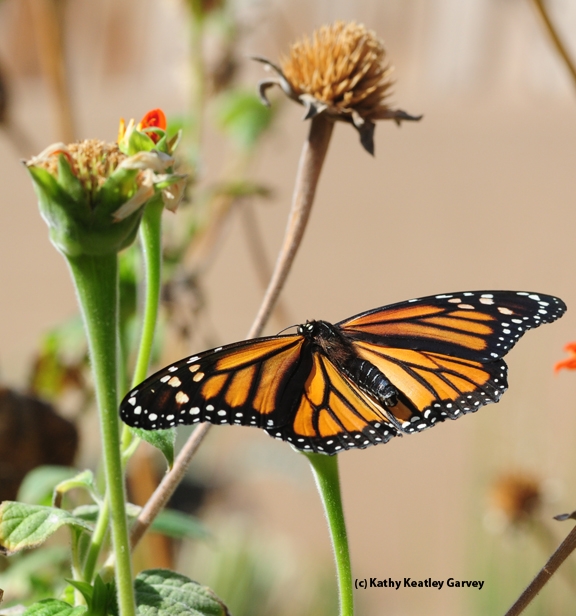