In most California homes there are few commodities more precious, or more taken for granted, than clean tap water. We use it without hesitation for drinking, cooking and washing produce.

However, recent news reminds us that not everyone can take clean water for granted. In rural California, where some households rely on well water, up to 2 million people have been exposed to unhealthy levels of nitrates in their water at some time during the last 15 years.

Synthetic fertilizers used in agriculture are major contributors of nitrates to our water, but a growing number of farmers are taking steps to reduce this problem by adopting micro and drip irrigation technologies, and by cultivating noncrop vegetation (buffer strips and cover crops) and “constructed wetlands.” All these measures reduce not only nitrates but many other pollutants from runoff.

"Nitrate problems start when applied fertilizer moves outside the root zones of plants," says Toby O'Geen, UC Davis soil resource specialist. "If nitrate reaches the root zone of actively growing crops, much of it is taken up by roots. But because of its high mobility, nitrate occurring outside the root zones can be transported by irrigation or rain as surface or subsurface runoff. "

In addition, growers are using buffer strips, cover crops, vegetated waterways and constructed wetlands to purify water, reduce erosion, and remove hazardous contaminants such as pesticides, metals, pathogens and fertilizers. The Farm Bill funds some of these programs through the Environmental Quality Improvement Program and the Wetland Reserve Program.

"Farmers receive technical advice and funding to take marginal land out of production and put it into noncrop vegetation and creation of habitat, including constructed wetlands," O'Geen said.

The effectiveness of such measures depends on the site and the design, but they are probably the best way to reduce water pollution from runoff. (Taking regulatory action against any particular grower is not practical because the sources of nitrate pollution are widespread and occur regionally. Even isotope "fingerprints" often give mixed results because sources mix in the environment.)

Another way that agriculture helps remove pollutants of all kinds, including not only fertilizers and pesticides but pathogens, is through natural filtering by rangelands, including oak woodlands. (See details of how oaks help nitrogen cycling.) More than two-thirds of California's drinking-water supply passes through or is stored in oak woodlands. In fact, rangeland in California (land suitable for grazing livestock) comprises more than half of the state's 101 million acres and typically is not fertilized. It forms our major drainage basins – filtering the drinking water for millions of people. (see California Agriculture). 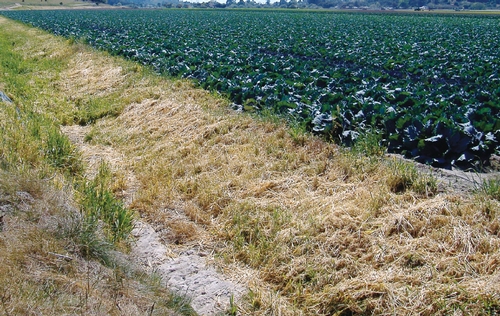