Kim Flottum, editor of Bee Culture. Note the live honey bee on the honey bee patch on his hat. (Photo by Kathy Keatley Garvey)
If you want to be a beekeeper, you must think like a bee, not like a beekeeper.

So says beekeeper/journalist Kim Flottum, who has served as the editor of Bee Culture magazine for more than three decades.

Flottum will speak on "So You Want to Be a Beekeeper" at the third annual California Honey Festival on Saturday, May 4 in downtown Woodland, and it's a talk you won't want to miss. He'll speak at 11:30 a.m. on the UC Davis Educational Stage. Admission to the fair is free.

Also in his talk, he'll clue you in on "where to get information, what can go wrong and what can go right," and then you can ask questions.

We asked Flottum why folks should keep bees. They "provide essential pollination, improve the genetics of the wild bee population in the area, ensure native plant populations," he said, "and because there is absolutely nothing more calming, soothing, enjoyable than being a part of that civilization, right in your backyard."

We remember when Flottum, who lives in northeast Ohio, addressed the Western Apicultural Society's 40th annual conference, held in 2017 at UC Davis. He predicted that the nation's 250,000 beekeepers (who manage around 4 million colonies) will turn into a million beekeepers in five years.

Flottum applauded "the incredible rise of new beekeepers in the last 10 years." He launched the magazine BEEKeeping, Your First Three Years, several years ago. Kim Flottum, editor of Bee Culture, stands by a cluster of bees, ready for bee wrangling by his friend Norm Gary, emeritus professor of entomology. Gary is the author of "Honey Bee Hobbyist: The Care and Keeping of Bees." (Photo by Kathy Keatley Garvey)
"The urban, surburban and country beekeepers are younger than the norm and we have more women beekeepers than ever,"  Flottum told the crowd. "This isn't like the 1970s Green Movement--I'm old enough to remember that. It's got legs! But watch out for an ugly urban disaster like a major beespill or bad honey recall."

The California Honey Festival, sponsored by the City of Woodland the UC Davis Honey and Pollination Center, will include scores of activities, from honey tasting to live music.  Among the events: a cooking stage, the UC Davis educational stage, a kids' zone, a refreshment zone (beer and mead, which is honey wine) and live entertainment. (See the schedule)

Amina Harris, director of the Honey and Pollination Center, said that Kitty Bolte, the first speaker on the UC Davis Educational Stage, will welcome Woodand as a "Bee City." Plans also call for UC Davis to be named "Bee University" on Saturday, Harris said. "Rachel Davis, director of the Gateway Gardens, Arboretum has been spearheading this designation."

Master beekeepers in the California Master Beekeeper Program, directed by Extension apiculturist Elina Niño, will share information on bees and beekeeping throughout the festival. Bernardo Niño is the educational supervisor, and Wendy Mather serves as the program manager.

The Häagen-Dazs Honey Bee Haven will feature a pollinator garden installation highlighting what and how to plant for pollinators, along with displays about common bees found in gardens, according to Christine Casey, academic program management officer who manages the bee garden on Bee Biology Road, west of the central campus.

Launched in 2017, the festival aims to cultivate an interest in beekeeping, and to educate the public in support of bees and their keepers, according Harris. Last year's festival drew 30,000 people and some 16 California honey companies.

As it expands from year to year, with more speakers, vendors, entertainment and family-friendly activities, the California Honey Festival is the place to "bee." 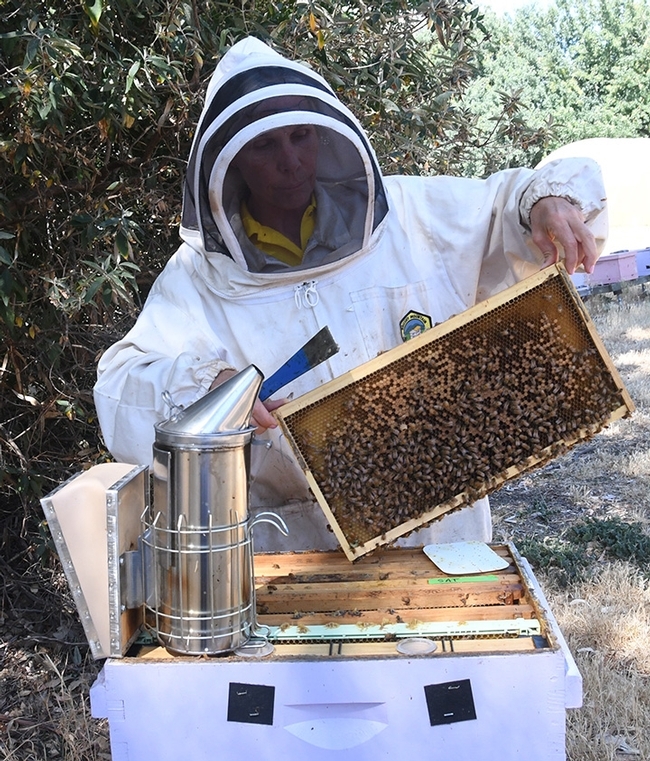