Published on: March 3, 2020
Seen any Western monarch butterflies yet this year?
No?  Butterfly guru Art Shapiro, distinguished professor of evolution and ecology, has. He spotted one on Jan. 30, 2020 in Sacramento, but it was outside his transect (he's monitored the population of butterflies, including monarchs, in his transect since 1972). (Shapiro declared monarchs on "life support" in a March 2019 Bug Squad blog.)
A January monarch? That indeed was early for this area but Louie Yang, associate professor of entomology,  UC Davis Department of Entomology and Nematology, did one better. He recorded one on Jan. 8, 2012 in East Davis.
Meanwhile, scientists want to know where the  monarchs are in the early spring. When the iconic butterflies head inland from their coastal overwintering sites, where do they go?
Researchers, led by Cheryl Schultz, biology professor at Washington State University, are recruiting the public, aka citizen scientists, to report sightings of monarchs from Feb. 14 through April 22, Earth Day. The project is called the Western Monarch Mystery Challenge.
"The data they collect will give much-needed insight into the butterflies' habitat needs during the spring months, so researchers can better target conservation efforts," a recent WSU news release indicated.
Said Schultz:  “We are already receiving sighting reports, which is very exciting. The reports show the enthusiastic interest by our community, and their deep connection to western monarchs.”
To participate in the Western Monarch Mystery Challenge:

UC Davis alumnus Christopher Jason, a technician in the Schultz lab, said WSU researchers are collaborating with the Elizabeth Crone lab at Tufts University; Xerces Society of Invertebrate Conservation; and UC Santa Cruz. Crone, a biology professor recently on a research sabbatical at UC Davis, told the UC Davis Department of Entomology and Nematology at a seminar Jan. 30 (the same day that Shapiro sighted a monarch in Sacramento) that more research needs to be done on where monarchs are in the spring, as that is a "critical point in their life cycle." Monarch populations are at their lowest at this time of year, Crone said, and individual butterflies may be at their "weakest right after their long overwintering diapause.”

In an email, Jason reiterated that "The Western Monarch Mystery Challenge is a campaign to find out where western monarch butterflies are in early spring. We know they spend the winter months (November to February) in groves along the California coast, and start breeding in central California in May, and in some cases, as early as February. However, we know a lot less about where they are and what they're up to in February, March, and April. Solving the mystery of where western monarchs spend the spring is central to conserving and restoring the phenomenon of monarch migration in the West."
"So, we're trying to get citizen scientists--also scientists!--to document where they see monarch butterflies away from the overwintering area in California by posting on the free iNaturalist app or by emailing us monarchmystery@wsu.edu," Jason explained. "All they need is a picture (or multiple, any picture will do even blurry ones), location, and date of sighting. We are providing weekly raffles for people who have sighted a monarch outside of the overwintering area. And our project will run until April 22, 2020."
Yes, the Western monarchs are in trouble.  "In 2018, the population of Western monarchs hit a record low of less than 29,000 butterflies," according to the Xerces Society. "In 2019, the number of butterflies was 29,418—better, but still a decline of over 99% since the 1980s, when the number of monarchs flying to California for the winter is estimated to have been 4.5 million."
To read more the troubling state of Western monarchs, check out this piece in BayNature.Org.

And keep your eyes open for Western monarchs. You may help solve the mystery. 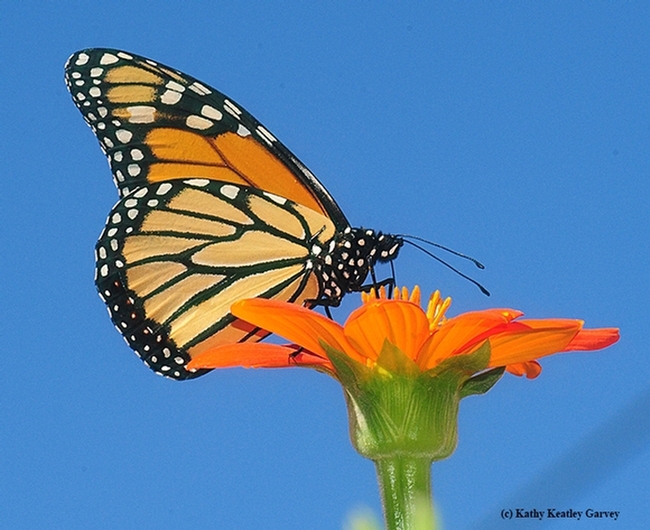