When we moved into our home in Vacaville, back in 2012, we inherited a stunning garden.  It has been so much fun getting to know all of the plants, some of which are quite sensitive while others are very robust.  The robust plants that have become a favorite are the Alstroemeria, sometimes known as Peruvian Lily, Lily of the Incas, or Parrot Lily.  There are around 32 different types; ours are the Alstroemeria magnifica. Alstroemeria with other plants

These plants are indeed truly magnificent.  They are found in many vibrant colors – from light-colored white and golden yellow, orange, apricot, pink, to deep red, lavender, and purple. They also have distinct markings, such as flecks, stripes, or blotches.  Although they do not have a fragrance, the flower is a favorite among florists since they are attractive in bouquets and have a long life as a cut flower. Originally from South America, Alstroemeria plants do best in USDA plant zones 8-10 and should be available for purchase locally and online.  They grow from a ‘tuber', formed from a stem or root that stores nutrients for the plant.  Most Alstroemeria plants are perennials, do well in full sun, and typically grow up to 2 feet.  Most of the data I found said that they bloom from June through October, but mine seems to bloom a lot longer than just this period.

These plants have a very “smart” biology.  The flower has both female and male parts, which could theoretically lead to self-pollination, instead of cross-pollination.  Cross-pollination is much better for the following reasons:

What is also fascinating about these plants is that they have adapted to cross-pollination using a mechanism called ‘Dichogamy'. The plant actually varies the time of maturity between male and female parts to limit self-pollination... how cool is that!

I had not realized that they are also great weed suppressors until I thinned them out a bit to create more space for stepping stones and other plants in the garden.  Once there were fewer Alstroemeria plants, many different kinds of weeds popped up that had not been there previously.  So now I let them grow as they wish.

According to UC Statewide Integrated Pest Management Program (UC IPM), some of their possible pests are as follows:  aphids, harlequin bugs, snails & slugs, spider mites, and whiteflies. Personally, I have not had any issues with these pests.  I see periodic snails in the garden bed, but no noticeable damage to the Alstroemerias.

The brightly colored flowers and good-sized landing areas attract many pollinators.  I have spotted hummingbirds, honey bees, and native bees enjoying this beautiful flower.  I have read that it is popular among bumblebees, but have not been able to attract them into this part of the yard, yet - hopefully soon! 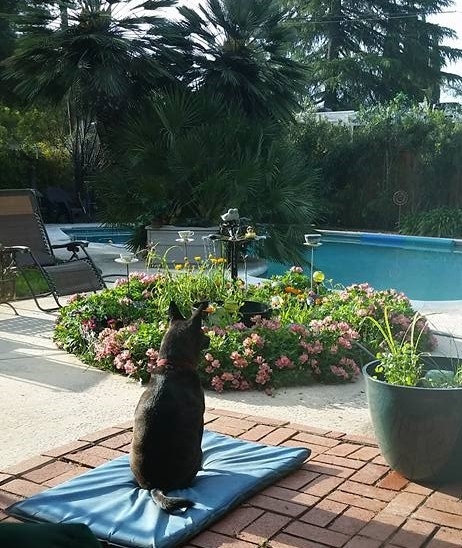 Suzy Q enjoying the Alstroemeria in the day time
Comments: 2
Comments:
by Karen Norton
on September 14, 2020 at 7:56 AM
Beautiful backyard. I love Alstroemeria too,Z and have purple and orange that I can share with you. I also have a Suzie Q kitty, who is a sweetheart.
Karen
by Betty Tobin
on June 12, 2021 at 3:57 PM
How & where do I go about getting seed or a start of Alstroemeria? It is my favorite flower. I love having a vase of them in my home. Please help. Thank you.
Leave a Reply: