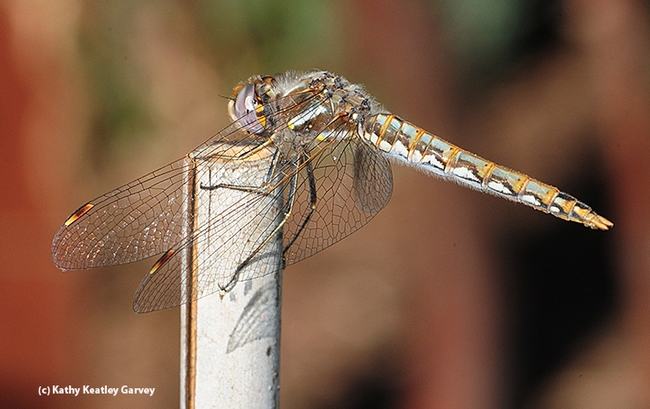 Rosser Garrison (right) talks with Andrew Rehn of Sacramento, stream ecologist with the California Department of Fish and Wildlife. (Photo by Kathy Keatley Garvey)
Dragonflies! Who isn't fascinated by dragonflies?

They're an ancient insect. Their ancestors existed before dinosaurs. Indeed, fossil records show that they were the world's largest flying insects, some with wingspans measuring three feet.

Visitors at the Bohart Museum of Entomology open house last Sunday, Sept. 20 at the University of California, Davis, learned those facts--and more--when dragonfly expert Rosser Garrison of the California Department of Food and Agriculture (CDFA) showcased his work.

Garrison, senior insect biosystematist in the CDFA's Plant Pest Diagnostics Branch, Sacramento, showed part of his worldwide collection of dragonflies and answered questions from the eager guests. He has researched and collected dragonflies throughout much of the world, including Puerto Rico, Argentina and Costa Rica.

Of the world's 6000 described species of dragonflies, Garrison has collected representatives of some 3500 different species. His collection totals 45,000 specimens.

Garrison displayed “The largest dragonfly in the world," Petalura ingentissima. This magnificent species, he said, was discovered in 1908 in North Queensland, Australia. Specimens are not often seen in collections. Among his other specimens: some of the smallest dragonflies including Nannothemis bella, Perithemis tenera (both eastern United States) and Nannophya phymaea (Singapore).

Some interesting facts about dragonflies:

Garrison holds two degrees from the University of California, Berkeley: his master's degree in 1974 and his doctorate in 1979. His doctoral dissertation explored “Population Dynamics and Systematics of the Damselfly genus Enallagma of the western United States (Odonata: Coenagionidae) 1979," published in 1984.

Among those attending were several other dragonfly experts/enthusiasts:

The dragonfly open house was the first of the academic year. Other weekend open houses scheduled:

The Bohart Museum, located in Room 1134 of the Academic Surge Building on Crocker Lane, houses a global collection of nearly eight million specimens, including 469 different species of dragonflies. It is also the home of the seventh largest insect collection in North America, and the California Insect Survey, a storehouse of the insect biodiversity. Noted entomologist Richard M. Bohart (1913-2007) founded the museum. It is open to the public Monday through Thursday, from 9 a.m. to noon and from 1 to 5 p.m. 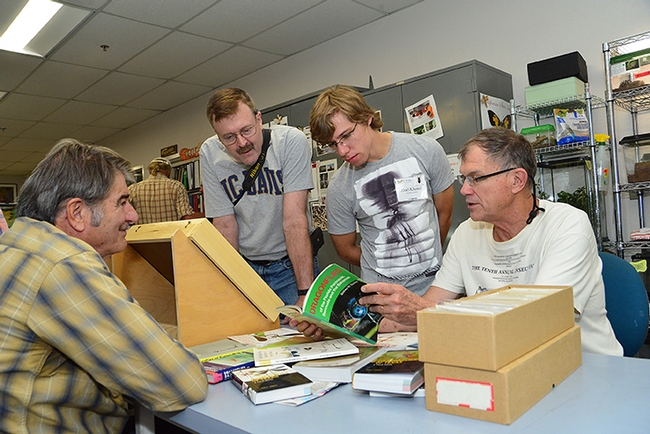 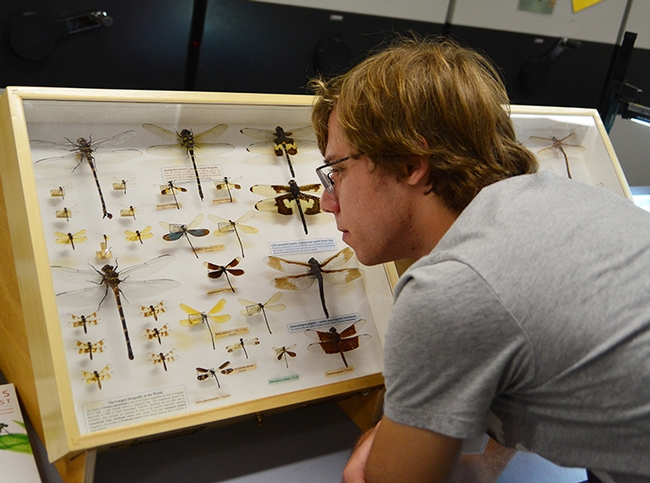 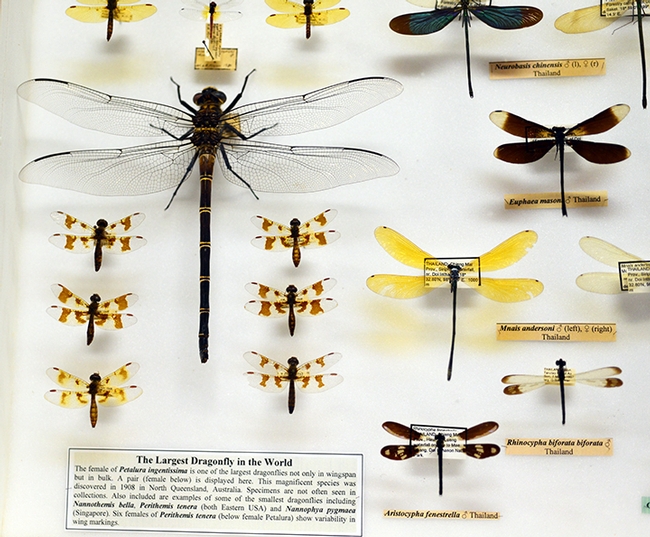 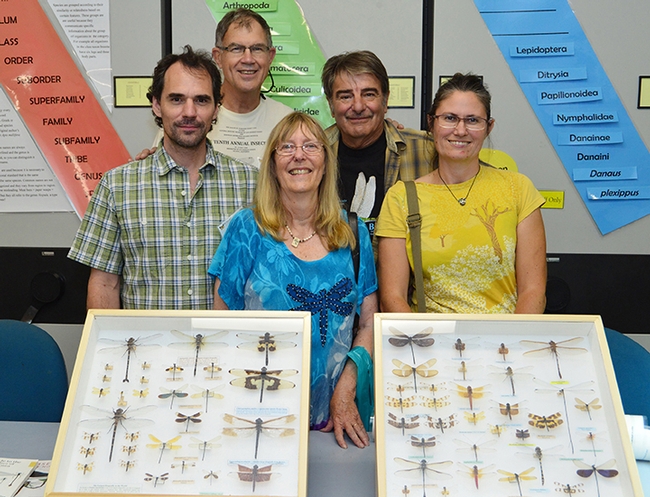 Rosser Garrison
You're walking through a park and suddenly spot a dragonfly perched on a stick.

Well, you won't want to miss the Bohart Museum of Entomology's open house on Sunday, Sept. 20 when the theme centers around dragonflies and damselflies.

Dragonfly/damselfly expert Rosser Garrison of the California Department of Food and Agriculture (CDFA) will share his knowledge of dragonflies and damselflies---and showcase some of his global specimens. The open house, the museum's first of the 2015-16 academic year, is from 1 to 4 p.m. in Room 1124 of the Academic Surge Building on Crocker Lane, corner of Crocker Lane and LaRue Road, University of California, Davis. Admission and parking are free.

Did you know that their ancestors existed before dinosaurs did? And that fossil records show that they were the world's largest flying insects, some with wingspans measuring three feet?

“Dragonfly relatives existed before the onset of the dinosaurs---Triassic Period, 250 to 200 million years ago,” Garrison said. Pointing out that these gigantic dragonfly-like insects had wingspans of about three feet, he said that “there was about 20 percent more oxygen in the atmosphere than there is now and other giant insects occurred during that period.”

Garrison will show some of his “Oh, My” dragonflies and videos. “Dragonflies are such neat creatures,” he said. “They are considered beneficial since both larvae---all aquatic--and adults are predators. But one is called the ‘Bee Butcher' and has a reputation for eating honey bees.”

Some interesting facts he related about dragonflies:

Garrison is a senior insect biosystematist in the CDFA's Plant Pest Diagnostics Branch, Sacramento. He identifies various potential invertebrate pests (such as grasshoppers, true bugs and terrestrial mollusks) entering California and determines if they are threats to agricultural commodities.

He has served as the editor of Odonatologica, the quarterly journal of the Societas Internationalis Odonatologica, since January 1998. He has researched and collected dragonflies throughout much of the world, including Puerto Rico, Argentina and Costa Rica.

Garrison received two degrees from the University of California, Berkeley: his master's degree in 1974 and his doctorate in 1979. His doctoral dissertation was on “Population Dynamics and Systematics of the Damselfly genus Enallagma of the western United States (Odonata: Coenagionidae) 1979, published in 1984.

He joined CDFA in December 2004 after serving as a senior biologist/entomologist for Los Angeles County, where he identified all potentially important agricultural invertebrate pests entering the county, and provided insect identification services and advice on their control.

It is also the home of the seventh largest insect collection in North America, and the California Insect Survey, a storehouse of the insect biodiversity. Noted entomologist Richard M. Bohart (1913-2007) founded the museum.

The Bohart Museum's regular hours are from 9 a.m. to noon and 1 to 5 p.m. Mondays through Thursdays. The museum is closed to the public on Fridays and on major holidays. Admission is free. Parking is free on weekends. 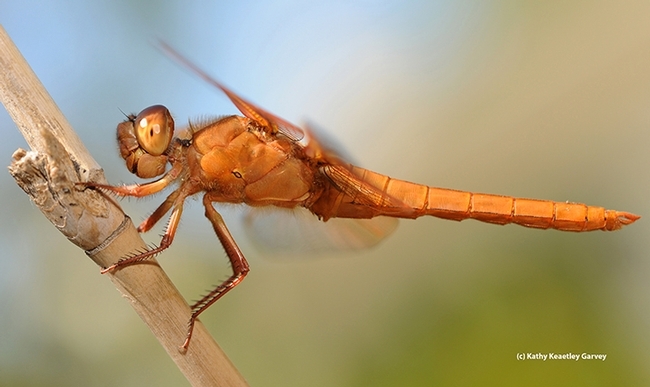 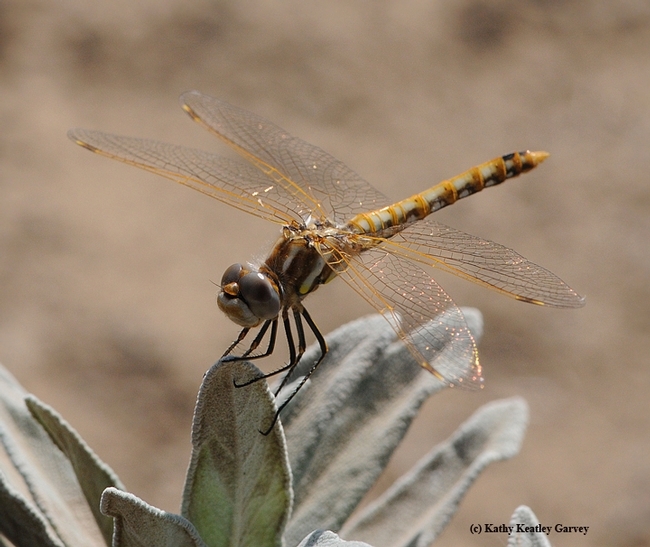 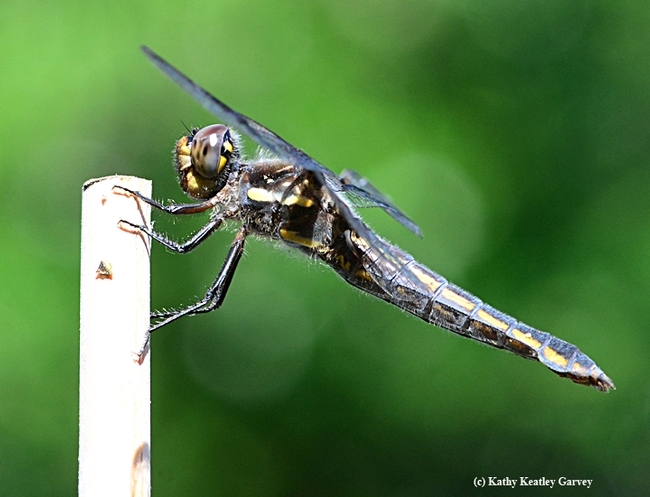 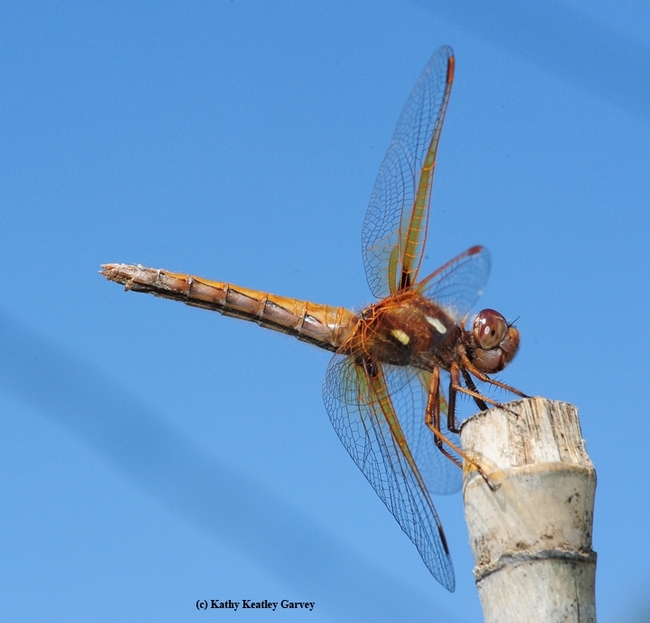 We spotted this damselfly foraging on a Mexican sunflower (Tithonia) this week  in our family bee garden. The blue was breathtaking.

Can anything be so blue? What species is this?

"By the amount of black on the middle abdominal segments, it looks to me like a male of Enallagma carunculatum Morse," said senior  insect biosystematist Rosser W. Garrison, with the California Department of Food and Agricultur'es Plant Pest Diagnostics Branch.

Its common name is "tule bluet." It's a species of damselfly in the family Coenagrionidae, found throughout North America, according to Wikipedia. It's all over the United States, "except for the southeastern quarter."

Its blue and black abdomen is usually more black than blue. It derives its common name, "tule bluet," from the stands of tule it frequents. Its habitat includes rivers, lakes, ponds, marshes and bogs. It likes to hang out in the bulrushes.

The nymphs eat such aquatic insects as mosquito and mayfly larvae, while the adults feet on a wide variety of small flying insects, including mayflies, flies, small moths and mosquitoes. Sometimes they'll grab a few aphids from plants.

Our little buddy (along with other damselflies) was hanging out in our Tithonia patch.

But the Tithonia patch is just a few feet away from our fish pond...

Check out the images of tule bluet on BugGuide.net for more of a blue fix and more information! 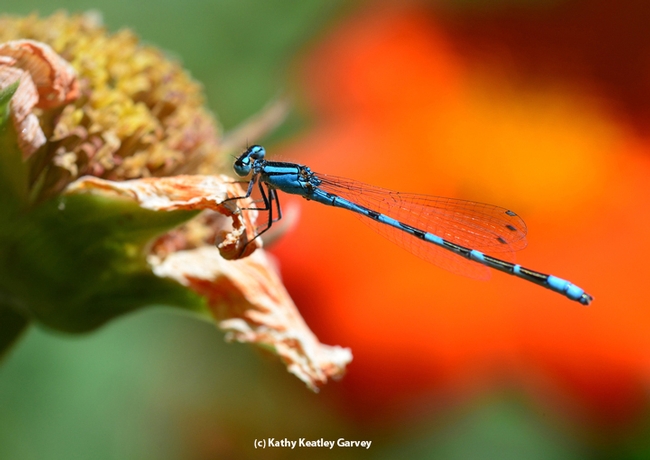