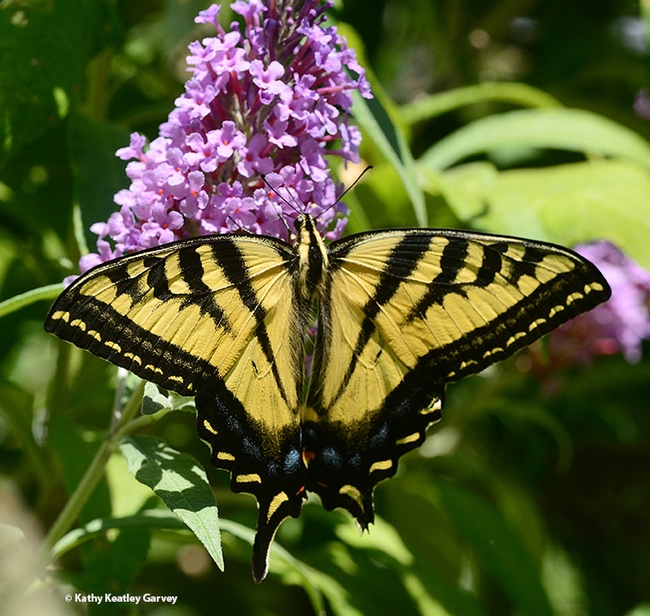 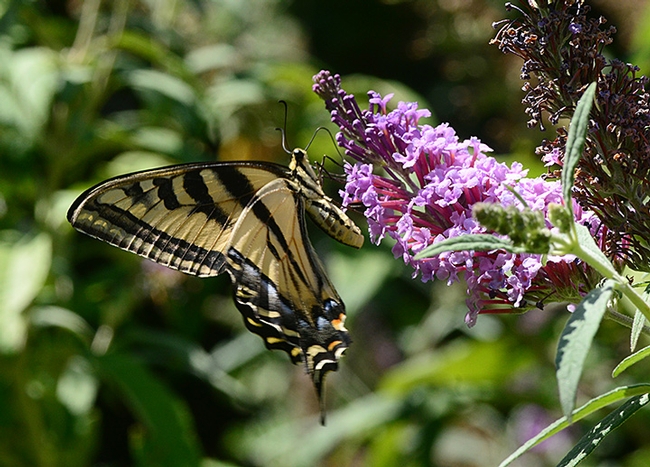 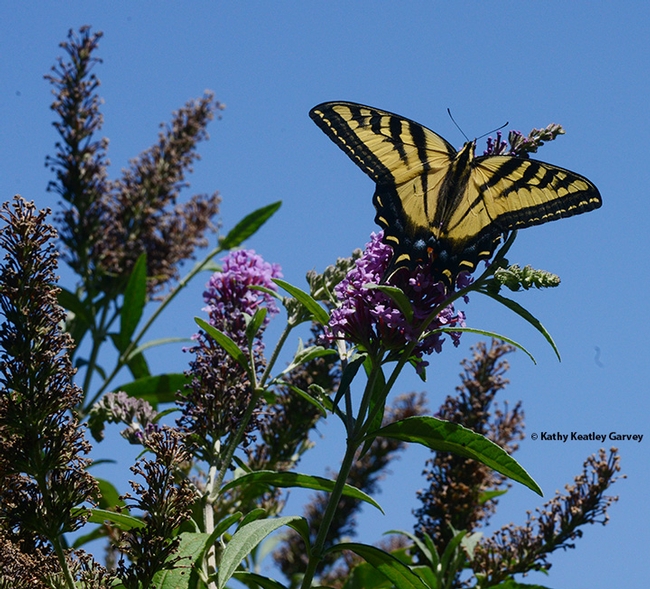 It's Thanksgiving Day, and what better day to stop and be thankful for not only family and friends, but for the beauty around us.

That would include insects, including the stunning Western tiger swallowtail (Papilio rutulus).

Last summer we enjoyed watching a very gravid female, with a three-to-four-inch wingspan, nectaring on a butterfly bush (Buddleia davidii) in our Vacaville pollinator garden.

She also nectared on Verbena before departing--probably to lay her eggs on a nearby host plant, liquidambar (sweet gum) or a sycamore.

For just a few minutes, the Western tiger swallowtail graced our pollinator garden with her breathtaking beauty. We are thankful for her presence, and the presence of all the pollinators, past, present and future, in our little pollinator garden.

"Without the actions of pollinators, agricultural economies, our food supply, and surrounding landscapes would collapse," points out the Pollinator Partnership. "Birds, bats, bees, butterflies, beetles, and other small mammals that pollinate plants are responsible for bringing us one out of every three bites of food." 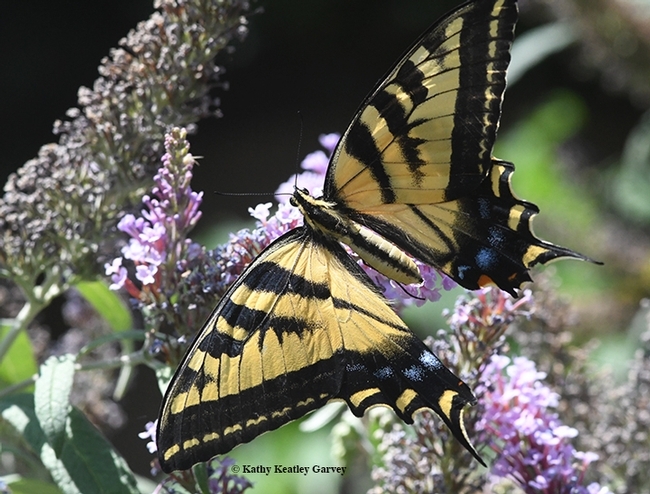 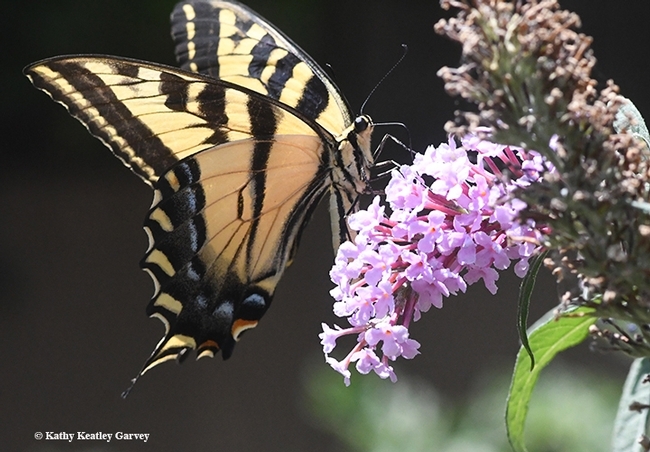 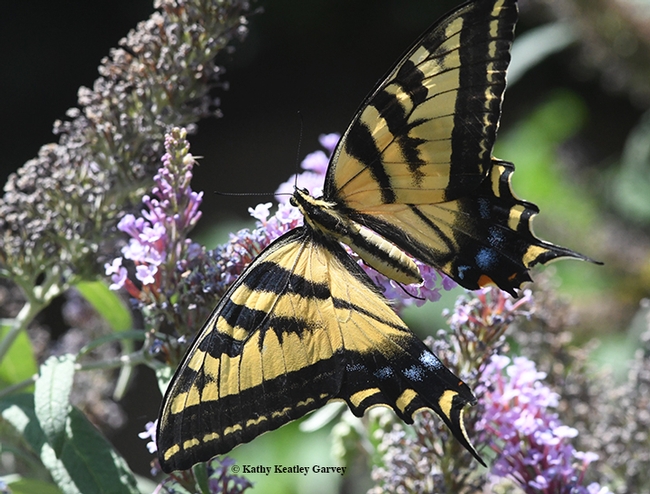 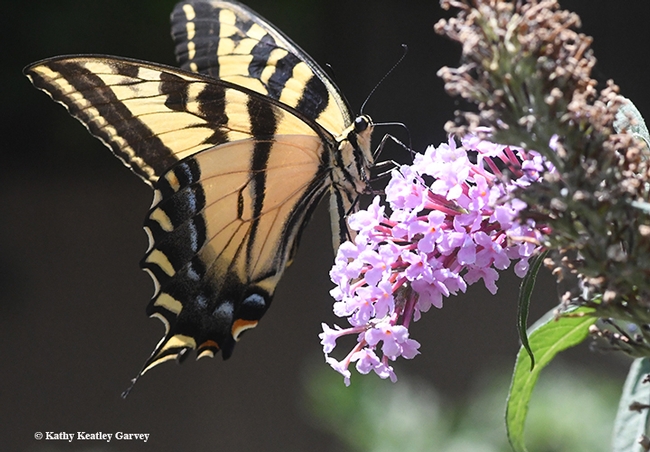 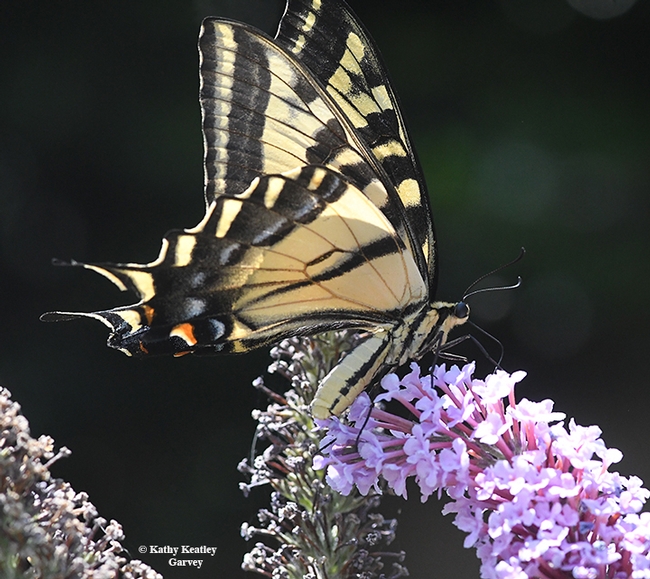 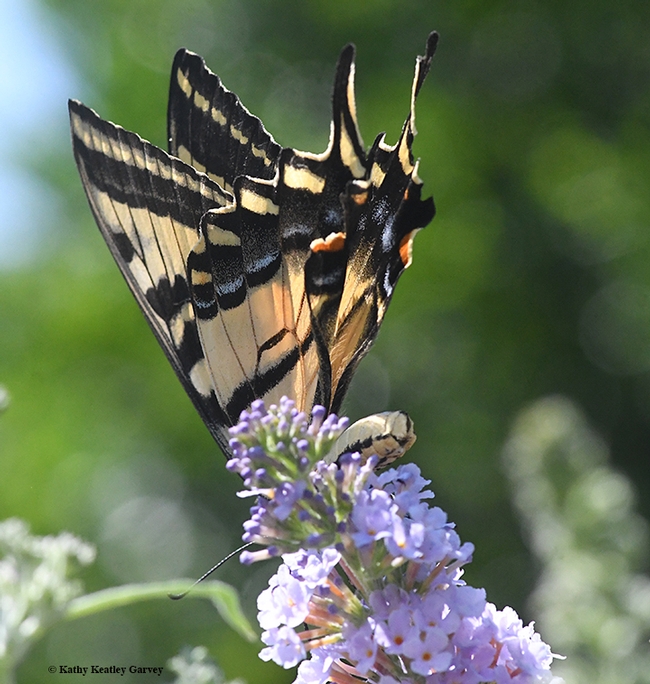 A flash of orange.

This time the flash of orange proved to be a California Tortoiseshell (Nymphalis californica).

Its wings are pumpkin orange with huge black spots while the underwings are dullish brown and gray, resembling a  dead leaf. What a perfect camouflage!

This particular Cal Tortie is probably a female, according to Art Shapiro, distinguished professor of evolution and ecology at the University of California, Davis. He has monitored the Central Valley butterfly population since 1972 and maintains a research website.

"Along with the Painted Lady, this is a mass migrant that makes news at irregular intervals by tying up traffic!" Shapiro says on his website. "The 'Tortie' overwinters as an adult and can sometimes be seen sunning itself in midwinter on mild days. It is generally common in foothill canyons in late winter, ovipositing on the young, tender growth of various species of Wild Lilac (Ceanothus)."

"The spiny, black-marked-with-yellow larvae feed gregariously, without a web, and in big years can defoliate whole stands of the plants," Shapiro notes on his website. "They often pupate on the bare, leafless stems en masse, the grayish-violet pupae looking like some strange kind of leaf and twitching in unison when disturbed. Adults emerge in late May to early June and almost immediately emigrate, going north or east and upslope."

They're often misidentified as monarchs, Shapiro told the recent Butterfly Summit at Annie's Annuals and Perennials, Richmond. He also mentions this on his website.

"Breeding localities in summer vary widely from year to year - sometimes in the high southern Sierra, sometimes in the Cascades... sometimes only in far northeastern California or even farther north," according to Shapiro's website.  "The migrant females lay on the tender growth of high-altitude Ceanothus such as Tobaccobrush and Snowbrush, which again may be defoliated. Adults emerge in late July and migrate to estivating grounds, generally above tree-line. These are often in the high country of Yosemite, Sequoia and Kings Canyon National Parks, but can even be in the Trinity Alps, South Cascades, or (as in 2005) on Mount Rose! Estivating Torties do little but 'hang out,' and many high-altitude hikers have described their encounters with millions of them in mystical terms (they often identify them as Monarchs!). In late September these butterflies scatter downslope to hibernate in the foothills--they are the late-winter butterflies of the new year. Estivators-hibernators thus may live 9 or 10 months as adults." (See more about this amazing butterfly on his website.)

Naturalist and insect photographer Greg Kareofelas, an associate of the Bohart Museum of Entomology, UC Davis, says there are a lot of Cal Torties around now. And when they disperse, "they can end up anywhere, including the valley. So not often seen in the valley, but not all that unusual."

This butterfly ended up on its namesake, the butterfly bush in our Vacaville pollinator garden. 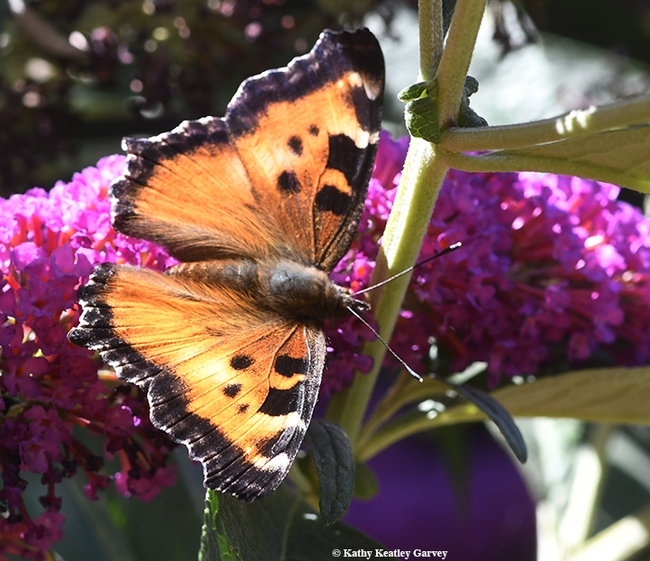 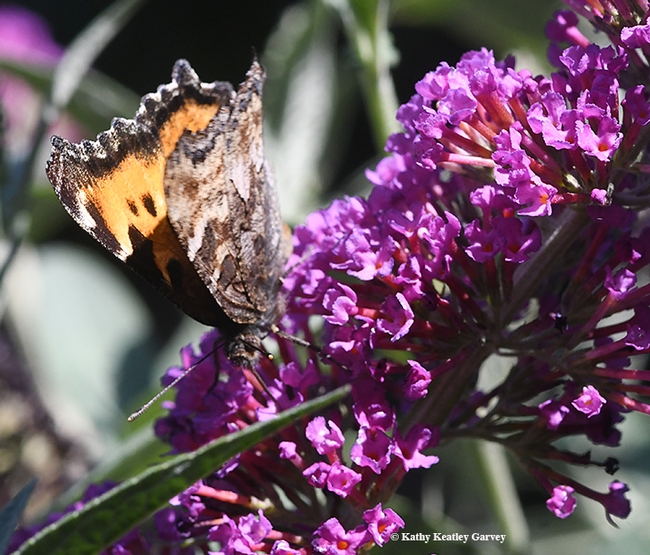 The California Tortoiseshell is bright orange with black spots on the wings, but the underside is a dullish gray-brown, resembling a dead leaf. (Photo by Kathy Keatley Garvey) 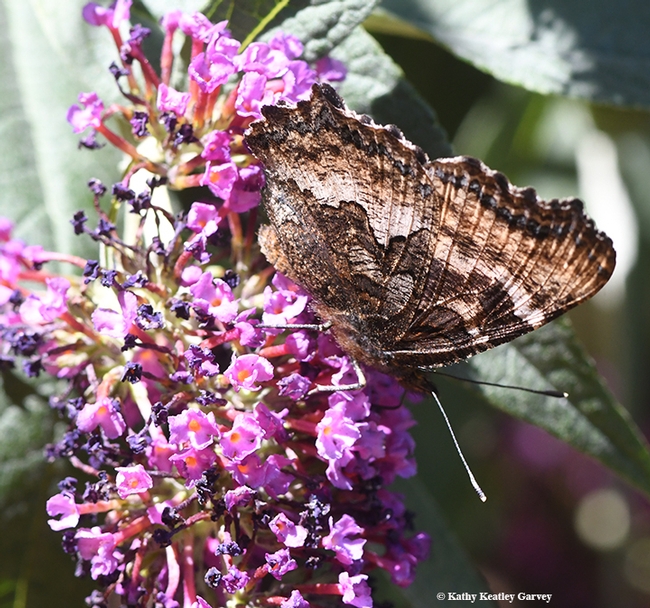 This image of the California Tortoiseshell shows the dullish brown and gray underwings, a perfect camouflage. (Photo by Kathy Keatley Garvey) 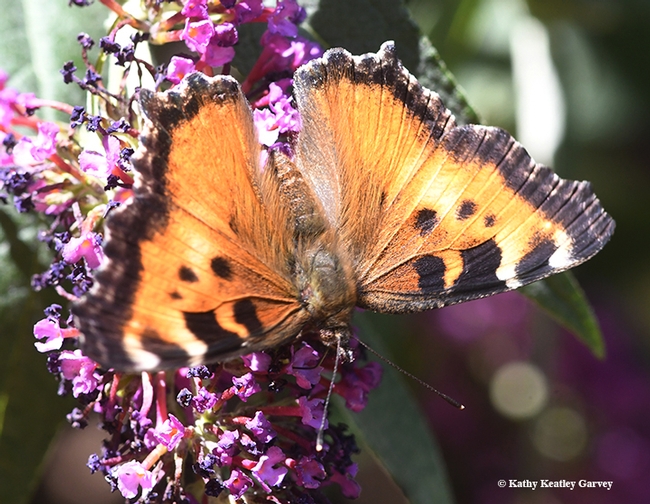 Think bees. Think butterflies. Think plants that will attract them.

The UC Davis Arboretum and Public Garden is hosting its first in a series of fall plant sales on Saturday, Oct. 7 at the Arboretum Teaching Nursery on Garrod Drive, UC Davis campus.

Members (you can join online or at the gate) can peruse and purchase plants from 9 to 11 a.m., and the general public from 11 a.m. to 1 p.m. Members save 10 percent off their plant purchases, while new members receive an additional $10 off as a  thank-you gift.

You can chat with the Arboretum folks to pick out that special plant you're seeking. They also provide an online list of available plants and/or you can download The Life After Lawn: Garden Gems Plant List.

Many of the plants at the sale are All-Stars. What's an All-Star? The Arboretum horticultural staff has identified "100 tough, reliable plants that have been tested in the Arboretum, are easy to grow, don't need a lot of water, have few problems with pests or diseases, and have outstanding qualities in the garden." Many are California native plants and support native birds and insects. Most All-Star plants can be successfully planted and grown throughout California.

If you miss the Oct. 7th sale, not to worry. There are two more fall plant sales:

While you're there, check out the 100-acre Arboretum, including the nearby Ruth Risdon Storer Garden (aka Storer Garden), a Valley-wise garden,and the Carolee Shields White Flower Garden and Gazebo (aka White Garden). Have you seen all of the 17 special gardens and collections?

They're called "living museums" because that's what they are. Living museums. And especially when they attract pollinators! 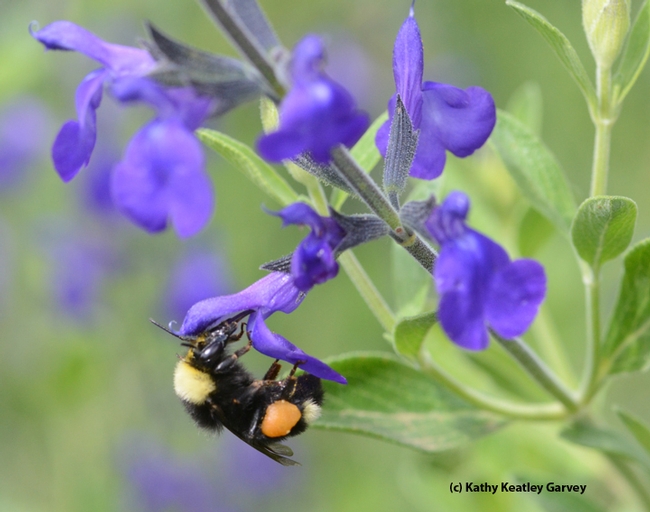 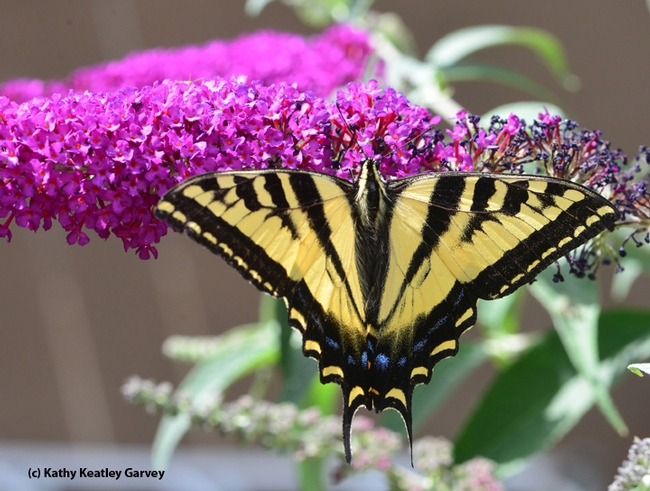 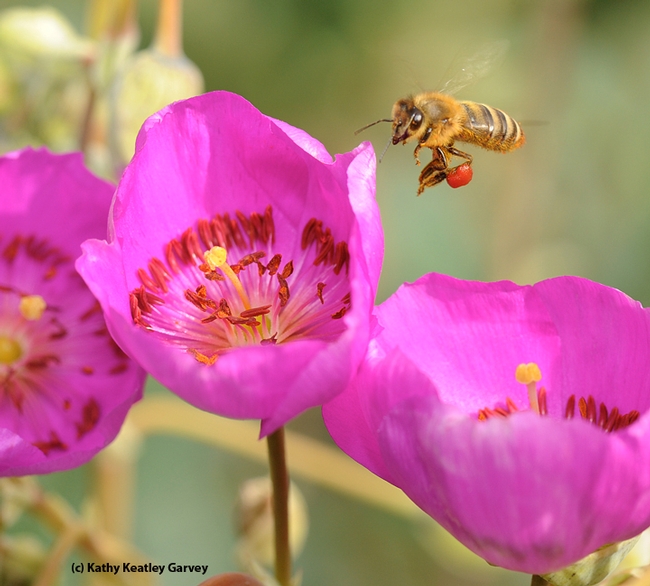