Bug Squad
sitenum=63
Happenings in the insect world
Bring on the Bugs at the Dixon May Fair! Entomologists at the University of California, Davis, will share their love of insects with fairgoers at the 144th annual Dixon May Fair, which opened today (Thursday, May 9) and continues through Sunday, May 12.

Have a question about insects?

Entomologist Jeff Smith, who curates the Lepitopdera (butterfly and moth) section at the Bohart Museum of Entomology, UC Davis, and Alex Dedmon, a forensic entomologist and doctoral student at UC Davis, will be showing bee, butterfly, dragonfly and other specimens, and live insects from the "petting zoo," including walking sticks and Madagascar hissing cockroaches.   Fairgoers are encouraged to hold them, photograph them and ask questions.

Smith and Dedmon will be at the fair on Saturday, May 11 from 11 a.m. to 3 p.m. in the Floriculture Building. Smith was honored in 2015 as a "Friend of the College," a coveted award presented by the College of Agricultural and Environmental Sciences.  He saved the museum some $160,000 over a 27-year period through his volunteer service (See news story.)

Dedmon studies with forensic entomologist Robert Kimsey, an adjunct professor in the UC Davis Department of Entomology and Neamtology.

The Bohart Museum, directed by Lynn Kimsey, professor of entomology, is the home of nearly eight million insect specimens, plus a year-around gift shop and a petting zoo.  The gift shop is stocked with books, jewelry, t-shirts, insect-collecting equipment, insect-themed candy, and stuffed animals.

The Bohart Museum, founded in 1946 by UC Davis entomologist Richard “Doc” Bohart (1913-2007), is open to the general public Mondays through Thursdays, from 9 a.m. to noon and from 1 to 5 p.m., plus occasional, weekend open houses​. Admission is free. The next weekend event will be "Moth Night" on Saturday, Aug. 3 from 8 p.m. to 11 p.m. Further information is available on the Bohart Museum website or contact (530) 753-0493 or bmuseum@ucdavis.edu. 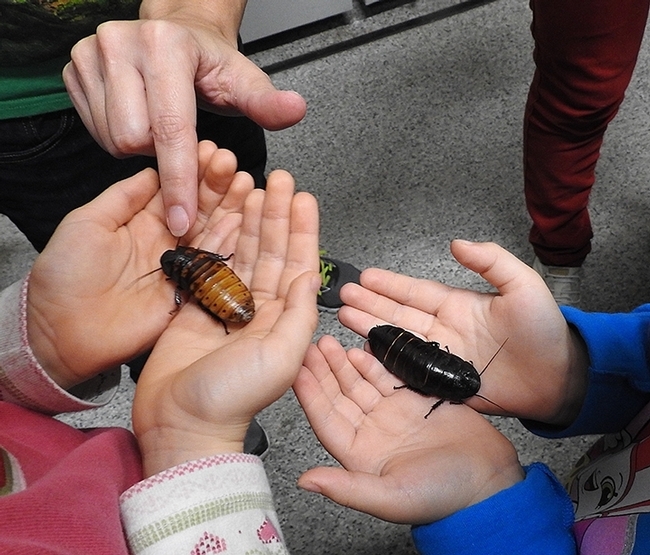 You can hold Madagascar hissing cockroaches from the Bohart Museum of Entomology's petting zoo, on Saturday, May 11 in the Floriculture Building, Dixon May Fair. (Photo by Kathy Keatley Garvey) 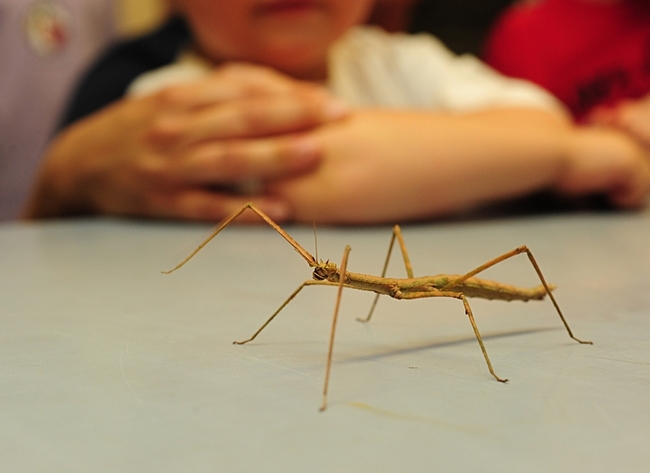 Walking sticks or stick insects will be at the Dixon May Fair on Saturday, May 11. (Photo by Kathy Keatley Garvey) 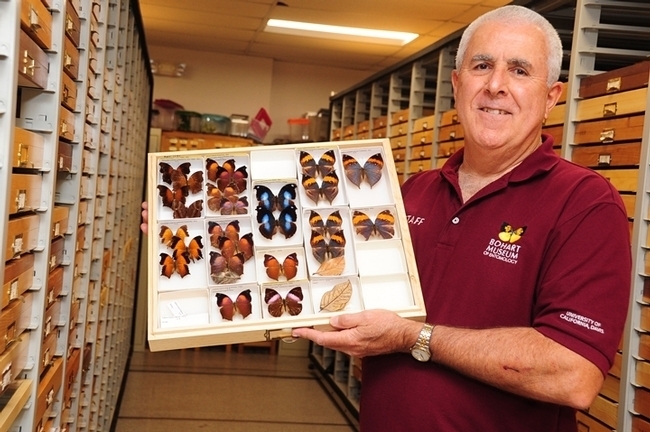 A sick honey bee. (Photo by Kathy Keatley Garvey)
It was great to see the Entomological Society of America (ESA) select "neonicotinoids" as a student debate topic for its recent meeting in Portland, Ore.

Bee health is a challenge, and this hot topic tied in with ESA President Frank Zalom's theme "Grand Challenges Beyond the Horizons."  Zalom, who just completed his presidential term and is now serving as past president, is a distinguished professor of entomology at the University of California, Davis, and an integrated pest management specialist.

Debate topics are always lively and this one was no exception. The teams are given eight months to practice for the 45-minute debate. The end result: their work is published in the ESA journal, American Entomologist.

"Should the agricultural use of neonicotinoids be banned?" Graduate students from the UC Davis Department of Entomology were given the "con" side and Auburn University, Alabama, the "pro side."

From all accounts, it was a fantastic debate, with both sides making key points. The UC Davis team, captained by Mohammad-Amir Aghaee, successfully argued that a ban on the insecticides in agriculture “will not improve pollinator health or restore populations, based on current science. Neonicotinoids are important for control of many significant agricultural and veterinary pests. Part of the solution is to develop better regulations that will protect the health of pollinators and retain the use of an important IPM tool.”

UC Davis won the debate, and then went on to win the overall ESA student debate championship for the second consecutive year.

“Neonicotinoids are important for control of many significant agricultural and veterinary pests,” Aghaee said at the onset. “Part of the solution is to develop better regulations that will protect the health of pollinators and retain the use of an important IPM (integrated pest management) tool.” The team also argued successfully that neonicotinoids (also known as neonics) are not all “created equal.”   The insecticide, chemically similar to nicotine, is implicated in the mass die-off of pollinators.  The European Union recently adopted a proposal to restrict the use of three pesticides belonging to the nenicotinoid family (clothianidin, imidacloprid and thiametoxam) for a period of two years.  In addition, the U.S. Fish and Wildlife Service announced that by January 2016, it will ban the use of seeds treated with neonicotinoid pesticides and the use of crops improved through biotechnology throughout the 150 million acres managed by the National Wildlife Refuge System.

The protocol included a seven-minute statement by each team; cross-examinations; rebuttals; and questions from the judges and audience.

The UC Davis entomologists agreed that acute and chronic studies "have shown that neonics are toxic to honey bees and bumble bees (Blacquiere et al. 2012)" but argued that “all neonics are not created equal (Brown et al. 2014)." They cited “inconsistent results with field-realistic doses (Cresswell et al. 2012)" and noted that “many other factors have been documented as contributing to pollinator decline (Epstein et al. 2012).”

It's not just insecticides that are killing bees, the UC Davis team pointed out. They listed the varroa mite (Varroa destructor),  vectored pathogens, and the acaricides, antibiotics and fungicides that are directly added to the colony. They also mentioned American foulbrood and Nosema bombi; inadequate honey bee nutrition; insufficient food substitute; habitat fragmentation; land-use changes; and the increasing demand for pollination changes.

The UC Davis team summarized its argument with “There is NO definitive scientific evidence that neonicotinoids are the primary cause of pollinator declines. Neonicotinoids are important reduced risk pesticides for management of some of our most damaging pests. Neonicotinoids should be better regulated, not banned." They concluded: “Given the current state of knowledge, banning neonicotinoids is a premature and disproportionate response to a complex issue. This requires holistic scientific inquiry and interpretation, and cooperation among stakeholders. Any changes must be based on science rather than opinion, current trends, or fear.”

The Auburn team argued that neonicotinoids are causing the death of bees essential for pollinating our food crops, and that the use of neonicotinoids should end. They outlined six key points:

Expanding on the fact that this is “a critical time for pollinators in the United States,” the Auburn team pointed out that honey bees pollinate $15-20 billion worth of crops in the U.S., and $200 billion worldwide; that approximately $3 billion worth of crop pollination services are provided by native bees; and that CCD likely has many contributing factors but many of those are enhanced by neonicotinoids. They said that the honey bee population is declining. In 1947, the United States had 6 million bee colonies and today, it's down to 2.5 million.

The Auburn team keyed in on lethal and sublethal effects of neonics:  synergistic interactions with other pesticides, including DMI (demethylation inhibitor) fungicides; increased susceptibility to pathogens (Nosema spp.); decrease in foraging success; decrease in overwintering queen survival; learning impairment consequences; and reproductive inhibition. They also called attention to prevalence and exposure to neonicotinoids. They discussed the neonicotinoid residues found on bee-pollinated crops and plants by various means of exposure: seed coating; foliar spray, soil drench, trunk injections; length of residue (soil vs. foliage and length of bee exposure); and single exposures resulting in season-long impacts. They also said the multiple means of exposure due to application can lead to multiple routes of exposure within bees: via pollen, nectar, guttation fluid and extrafloral nectaries.

Next year's ESA meeting takes place Nov. 15-18 in Minneapolis. Its theme, chosen by ESA President Phil Mulder, professor and head of the Department of Entomology and Plant Pathology at Oklahoma State University, is "Synergy in Science: Partnering for Solutions." He says that the theme "represents a collaborative effort with the other societies, but genuinely keeps us focused on our three strategic principles; 1) our social responsibility to develop ALL members, 2) exploring global partnerships and relationships within our science, and 3) expanding our influence around the world to maximize the impact that entomology has on improving the human condition and our knowledge of the world around us." 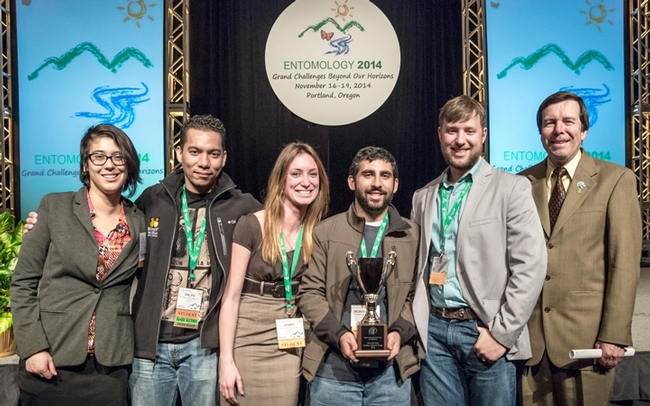 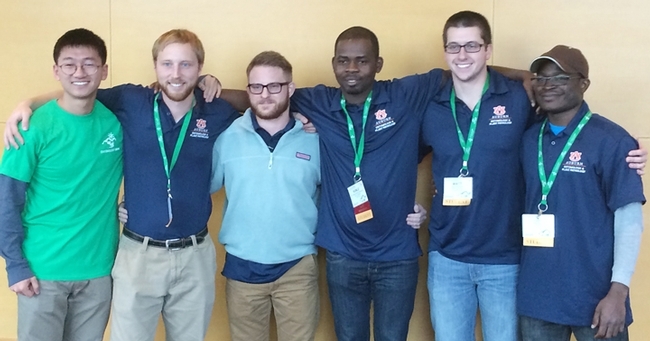 We're glad to see that three noted entomologists at the University of California, Davis, received distinguished awards in their fields at the 94th annual meeting of the Pacific Branch, Entomological Society of America (PBESA) on April 13 in Boise, Idaho. frankzalomuc
This year marked one of the most celebrated years of professional recognition for UC Davis faculty at a PBESA meeting. (A fourth faculty member, chemical ecologist Walter Leal, received the prestigious C. W. Woodworth Award on Monday, April 12.)

As regional award winners,  Parrella, Zalom and Godfrey will now advance to the national ESA awards competition. The national meeting is set Dec. 12-15 in San Diego. larrygodfreyuc
You can read more about their accomplishments on the UC Davis Department of Entomology Web site.

Just a few of the comments they received:

Michael Parrella
“In his 30-year career, Dr. Parrella has developed an internationally recognized program focused on advancing integrated pest management and biological control for the floriculture and nursery industry,” said James Carey, professor of entomology at UC Davis and chair of the department’s awards committee.

“This industry, once dominated by chemical control strategies, now regularly uses the tenets of IPM, and many growers routinely use biological control,” said Carey, who nominated Parrella for the award.  “His training of graduate students and postdoctoral scientists and the extraordinary effort to translate research into practice puts Dr. Parrella in a class by himself.  He has accomplished this while shouldering an enormous administrative load.”


Larry Godfrey
He focuses his program on the IPM of insect and mite pests of field crops and vegetable crops, particularly pests of cotton and rice. His work extends globally. “Given the diversity of agriculture in California, this is a vast undertaking and Dr. Godfrey has made significant contributions in approximately 15 different crops during his 19-year tenure in this position,” said Parrella, who nominated him for the award. “This incredible diversity of effort and accomplishment puts Dr. Godfrey in a class by himself..."

Frank Zalom
IPM specialist Zalom is not only a professor of entomology but an Extension agronomist and an entomologist in the Agricultural Experiment Station. He's "one of the most influential scientists in the development and implementation of IPM policy and practices in the United States and the world, through his numerous and continuing contributions as a leader, director, and organizer,” said colleague Jocelyn Millar, an entomology professor at UC Riverside who nominated him for the award.

Zalom, who directed the statewide UC IPM Program for 16 years (among other responsibilities)  is known for his “truly extraordinary record of achievement and service to IPM extending over several decades,” Millar said.