Klittich, who is starting his third year as a doctoral student in the UC Davis Department of Entomology and Nematology, studies with major professor Michael Parrella, professor and chair of the department.

Klittich says he's not an artist but has always had an interest in honey bees. He was a member of the UC Davis graduate student team that won the student debate championship, Nov. 18, at the Entomological Society of America's  62nd annual meeting in Portland, Ore. The team debated neonicotinoids, defeating Auburn (Alabama) University team.   UC Davis successfully argued the con side of “Neonicotinoids Are Causing the Death of Bees Essential for Pollinating our Food Crops. The Use of Neonicotinoids Should End.” The team, captained by Mohammad-Amir Aghaee of the Larry Godfrey lab, also included Jenny Carlson, Anthony Cornel lab; Ralph Washington Jr., Steve Nadler lab; Margaret "Rei" Scampavia, Neal Williams/Edwin Lewis lab. The Beetles is a popular EGSA shirt. Entomology's Most Wanted
Klittich's research focuses on increasing plant resistance to herbivorous and improving integrated pest management (IPM) programs in horticulture and floriculture. He is currently analyzing the effects of silicate fertilizers on leafmining pests in chrysanthemum and gerbera production systems.

Klittich, from Fillmore, is a graduate of Fillmore High School and valedictorian of the Class of 2006. He grew up in the nursery business, working at his family's nursery, Otto and Sons Nursery, Inc., Fillmore. During his youth he was active in 4-H and Boy Scouts, achieving the rank of Eagle Scout. Wanna Bee
Klittich received his bachelor degree in entomology from UC Davis in 2010. Following his graduation, he worked in the Parrella laboratory, helping to maintain the greenhouses and experimental plants and assisting with pesticide efficacy trials on several crops and pests including spider mites, leafminer and mealbugs. He enrolled in the doctorate program in 2012 and continues his work in the Parrella lab. See No Weevil
The current president of EGSA, Klittich is active in the Pacific Branch of ESA (PBESA) and the national organization. He was a member of the UC Davis championship team that won the ESA student debate in 2013. The subject: “Using GMOs to Using GMO's  to Increase Food-Security in Regions Where the Technology is Not Universally Accepted – Con Side." Klittich is a frequent  invitational speaker at ESA meetings. He presented a scientific talk on “Role of Invasive Arthropods in Introducing New Pathogens to the Pacific Branch” (2013 PBESA meeting, South Lake Tahoe) and “Influencing oviposition and feeding site selection of Liriomyza trifolii (Burgess) (Diptera: Agromyzidae) (2014 ESA meeting, Austin, Texas). Klittich serves as a teaching assistant for a UC Davis entomology class on "Natural History of Insects" and co-organized a freshman seminar in 2013 on "Insects in Industry."


Klittich plans to receive his doctorate in 2016. His career goal: to pursue a career in pesticide and IPM research either in the private sector or in the California University System as a farm advisor.

In addition to the honey bee t-shirt, EGSA is offering other T-shirts, most available for $15. Popular EGSA shirts depict a dung beetle, “They See Me Rollin'”; a “cuddling moth” for infants and toddlers; a weevil shirt, “See No Weevil, Hear No Weevil, Speak No Weevil”; and “The Beetles” shirt, of four beetles crossing Abbey Road, reminiscent of The Beatles pictured on their Abbey Road album. All can be ordered from Margaret “Rei” Scampavia at m.rei.scampavia@gmail.co. 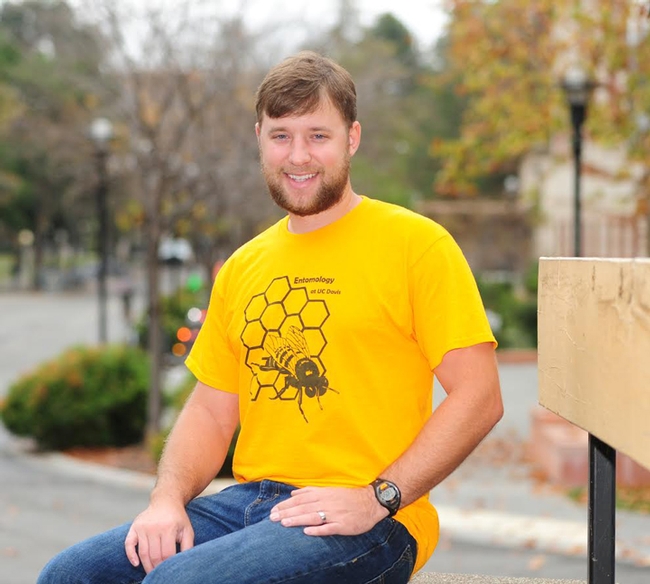 Insect-themed jewelry, popular at the Bohart Museum Gift Shop. (Photo by Kathy KeatleyGarvey)
If people are bugging you about a list of holiday gifts, think bugs.

The UC Davis Department of Entomology and Nematology has plenty of insect-themed gifts.

Two of the latest books available in the gift shop are Bumble Bees of North America: An Identification Guide (Princeton University Press) and California Bees and Blooms: A Guide for Gardeners and Naturalists (Heyday), co-authored by native pollinator specialist Robbin Thorp, emeritus professor of entomology at UC Davis. Thorp is an associate at the Bohart Museum and maintains an office in the Harry H. Laidlaw Jr. Honey Bee Research Facility. Entomologist Fran Keller with her children's book on the dogface butterfly. (Photo by Kathy Keatley Garvey)
Another popular book, published in 2013, is a 35-page children's book, The Story of the Dogface Butterfly, authored by entomologist Fran Keller, who this year received her doctorate in entomology from UC Davis. She is a researcher, college instructor, mentor, artist, photographer, and author.

The book, geared for  kindergarten through sixth-grade classrooms, and also a favorite of  adults, tells the untold story of the California dogface butterfly (Zerene eurydice), and how a classroom successfully mounted a campaign to name it the California state insect. Illustrations by artist Laine Bauer, a UC Davis graduate, and photographs by naturalist Greg Kareofelas, a Bohart Museum volunteer, depict the life cycle of this butterfly and show the host plant, false indigo (Amorpha californica). Net proceeds from the sale of this book are earmarked for the education, outreach and research programs at the Bohart Museum.

Gift shop items are available both in the store (Monday through Thursday) and online, http://www.bohartmuseum.com/. Among the favorites gifts at the Bohart Museum: Eat a lollipop and get some cricket protein. (Photo by Kathy Keatley Garvey)
The Bohart Museum's regular hours are from 9 a.m. to noon and 1 to 5 p.m. Mondays through Thursdays. The insect museum is closed to the public on Fridays and on major holidays. Admission is free. More information is available by contacting the Bohart Museum at (530) 752-0493 or Tabatha Yang, education and outreach coordinator at tabyang@ucdavis.edu.

The Entomology Graduate Student Association (EGSA) offers t-shirts to fund its educational activities. The newest t-shirt, design by grad student Danny Klittich, who studies with major professor Michael Parrella, professor and chair of the UC Davis Department of Entomology, is of a honey bee exiting a honeycomb.

Other popular EGSA shirts depict a dung beetle, “They See Me Rollin'”; a “cuddling moth” for infants and toddlers; a weevil shirt, “See No Weevil, Hear No Weevil, Speak No Weevil”; and “The Beetles” shirt, of four beetles crossing Abbey Road, reminiscent of The Beatles pictured on their Abbey Road album. The shirts can be ordered from Margaret “Rei” Scampavia at mrscampavia@ucdavis.edu.

Another bug gift: the pollinator notecards being sold by the UC Davis Honey and Pollination Center, directed by Amina Harris. The photos of insects, including bees and butterflies, were donated by communication specialist Kathy Keatley Garvey of the UC Davis Department of Entomology and Nematology, who captured most of the images in her bee garden The notecards are available from the Center office (in the Robert Mondavi Insitute for Wine and Food Science on Old Davis Road)  and at the UC Davis Bookstore, among other places. 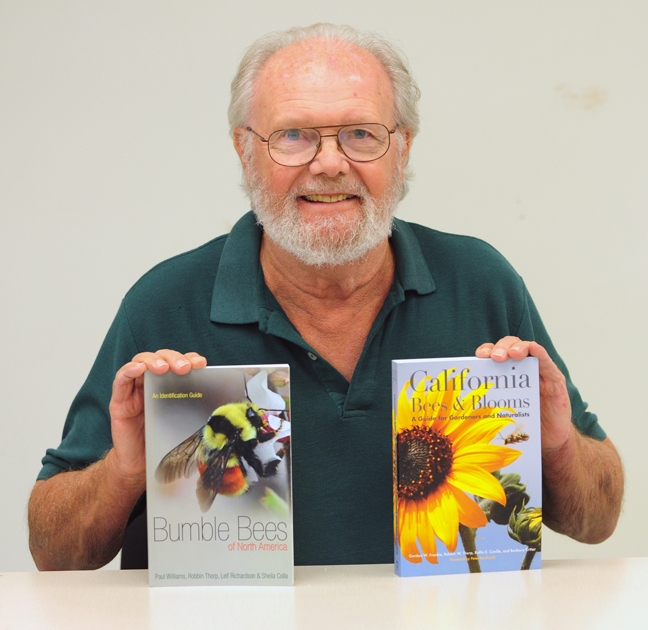