“My jar of honey went bad so I threw it away.” 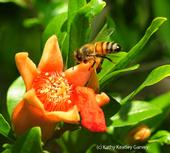 Did you catch the buzz?

It's still a troubling scene for our nation's honey bees, but it appears that the total losses for the 2011-2012 winter aren't as bad as they could be.

In other words, managed honey bee colonies appear to be holding their own. Overall, they didn't take a sharp dive last winter.

The annual survey, conducted by the U.S. Department of Agriculture (USDA), the Bee Informed Partnership, and the Apiary Inspectors of America shows that the honey bee colony losses averaged 30 percent for the winter of 2011-2012.

Kim Kaplan of the...