More than 400 food writers have converged in Sacramento for the first International Food Bloggers Conference to be held in the California capital. The event began with an excursion for about 45 of the foodies to Capay Valley Ranches, where the focus was on production of premium extra virgin olive oil.

The writers heard about innovations in olive oil production that have allowed California producers to minimize labor costs and maximize yield and quality by establishing super-high-density orchards. Farm manager Joe Armstrong led a farm tour, explaining amendments that had to be added to the soil before planting, the configuration of the trees in hedgerows and an irrigation system...

A student team composed of some of the best and brightest young minds at UC Davis took the grand prize last week in an international competition for the high-tech biosensor they created to detect low-grade or adulterated olive oil.

The students had spent several months designing and...

Olive oil is repeatedly in the news these days, but the stories often raise as many questions as they anwer:

A new survey, spearheaded by Dr. Selina Wang at the Olive Center at UC Davis, shows that consumers need more information about olive oil in... 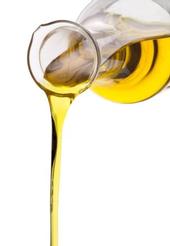 The upcoming July-September California Agriculture journal (to be posted by July 11) reports UC research into plant compounds (phytochemicals) that can help prevent or treat disease. The findings stem from pilot projects at the center, as well as other UC research. Articles focus on how micronutrients, biofactors and phytochemicals (plant...

But the tall thin black bottle of December’s New Oil from Katz and Company, near Napa, was so fabulous I decided to start learning the extra virgin olive oil (EVOO) lexicon. Did I know for sure whether it was grassy, buttery, peppery or pungent? It certainly was...