Reposted from the UC ANR news 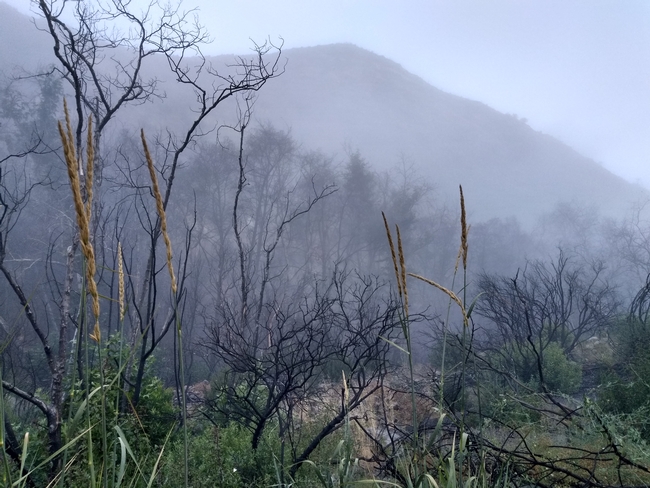 Plants regrow on a landscape scorched by the Thomas Fire of 2017. Photo by Annemiek Schilder

Members of the public are invited to attend a free webinar series discussing the effects of climate change on Southern California. At the three-day webinar Climate Change: What Does It Mean for Southern California?, UCLA climate scientist Daniel Swain and UC Agriculture and Natural Resources scientists will discuss climate changes anticipated, impacts on agriculture, wildfire risk and how to prepare for it, and ways to communicate about climate and to build resilience in communities.

“We are hearing a lot about climate change, but it can be difficult for the average person to figure out what it means for where they live and to understand the science behind it,” said Annemiek Schilder, director of UC Cooperative Extension in Ventura County and UC ANR Hansen Agricultural Research and Extension Center.

Topics of discussion include drought, adaptation for agriculture, fire management on rangelands and wildland-urban interface areas, and how UC Climate Stewards might improve climate understanding and empower community-level stewardship.

“All of us need to be better informed about this new reality and know how to respond to it,” said Schilder, who is organizing the event. “For Southern California, as a region with intense agricultural production and huge urban populations living in proximity to the coast, climate change could have devastating impacts. One of my favorite Latin sayings applies: Serius est quam cogitas – it is later than you think!”

Although residents may be concerned about climate change, they may not know what to do. The scientists will offer suggestions.

“People may feel powerless in the face of something that is happening on a global scale, but there are indeed things that can be done by individuals to mitigate the effects and to build resilience in the face of small and large disasters,” Schilder said. “In fact, doing nothing has a huge cost associated with it. Think of the economic damage already incurred by climatic extremes in recent years and the costs associated with possible future waves of climate refugees coming to the U.S.”

Registration for the webinar series, which is sponsored by the UC Thelma Hansen Fund, is free. To register and see the agenda and speaker biographies, visit http://ucanr.edu/hansensocalclimate.

Reposted from the UCANR news blog This hungry audience is driving rapid growth of UC Agriculture and Natural Resources' California Naturalist Program. Established programs such as those offered by Pasadena City College, the Santa Barbara Botanic Garden, and the Tejon Ranch Conservancy are being joined by new and developing partners. Mountains Recreation and Conservation Authority manages land in both the Santa Monica Mountains and downtown Los Angeles. MRCA incorporated the CalNat curriculum into a longer Bridge to Park Careers workforce training program, resulting in the hiring of a cadre of new rangers well-versed in California natural history. A hike to the Hollywood sign lends a far-off view of downtown beyond Griffith Park.

But interpreting nature in Southern California holds unique challenges. In this arid land, agriculture and urban residents fight fiercely over scarce water (much of it imported from elsewhere), an even more contentious resource in our current drought conditions. And fire, though common throughout the state, is a particularly prickly topic in a region with so many homes.

In 2014, nearly 200 California Naturalists from partner organizations throughout the state came together in Asilomar for a conference to appreciate our natural resources and to celebrate each others efforts in habitat restoration, citizen science, and interpretation. But our CalNat community has grown immensely, and we expect an even greater number to join us for field trips, lectures, trainings, and fun when we convene again in 2016, this time in Southern California. In the meantime, CalNat courses will continue to spring up all over the Southland, so those 22 million people won't have to fight traffic to find a class, and some nature, close to home.

Reposted from the UCANR News Blog

Responding to the giant fire that burned 39 homes and 70,000 acres in the Clear Lake area, Warren Olney of KCRW's Which Way LA asked a UC Agriculture and Natural Resources (UC ANR) fire expert in Southern California, "Could it happen here?" "It happens here all the time," said Tom Scott, wildlife and urban interface UC ANR Cooperative Extension specialist in the Department of Environmental Science, Policy and Management at UC Berkeley. (Scott is based at UC Riverside.)

He said of the 50 major fires recorded on the CalFire website, 30 were in Southern California. "It will probably happen again."

Media outlets are reporting that the Rocky Fire in Northern California is burning so hot, it is creating its own weather. Scott said the phenomenon is less likely to occur in Southern California fires.

"A lot of times our fires are coupled with Santa Ana winds," he said. "You don't necessarily see the fire creating its own wind because winds are already blowing 50 or 60 miles per hour."

One thing that can lead to particularly hot fires in the LA area is the lack of summer rain.

"This creates a very dry environment in the summertime," Scott said. "Plants can dry down to a point where they ... are very low moisture, which makes them very flammable. The other thing is, our plants don't decompose. We have a lot of biomass hanging around for a long time, sometimes centuries. When that burns, there's a tremendous amount of fuel and it causes hot and quick-moving fires."

Clearing a defensible zone around homes in fire-prone areas is one way to reduce the risk that a house will burn down. But it takes a long-term concerted effort to manage the landscape to prevent fires from becoming major conflagrations that roar from the mountains to the sea, Scott said.

"One of the things that a lot of people imagine," he said, "is where we can get back to a point where the landscape has fires that are smaller, at a time (of year) when it's not as hot and we don't have Santa Ana winds."

In the meantime, people in fire-prone areas may consider putting their irreplaceable valuables in storage from April to November, he said.