I have been getting quite a few questions regarding blast, mostly from Glenn and Colusa counties. It seems that 2020 will be a year with significant blast pressure.

The fungicides azoxystrobin and trifloxystrobin (the active ingredients in Quadris and Stratego, respectively), are labeled for blast control. In general, treatments for leaf blast are not recommended. Leaf blast should be viewed as a sign that the panicles need to be protected with a fungicide application at early heading.

One question I frequently get is weather treatment of leaf blast will help reduce the severity of panicle blast later on. Unfortunately, I do not have an answer. The fungicides we use to manage blast inhibit spore germination. By spraying for leaf blast, the spore pressure in the field would be reduced. However, infections that occurred before the fungicide was applied will continue their cycle and will produce more spores. Additionally, blast spores are moved by air currents, and can come from neighboring fields.

In a trial conduced in 2019, application of Quadris or Stratego at maximum label rates at the mid boot stage (4-inch panicle inside the boot) resulted in a 85% reduction in the number of blasted panicles, while application at 100% heading resulted in 60% reduction in the number of blasted panicles. In this trial, the heading treatment was applied a little too late, resulting in less efficacy than the mid boot treatment. Application early at 35 days after seeding had no significant effect on blast. If you are seeing more leaf blast than previous years, a good strategy would be to do a fungicide application at the mid-boot to boot split stage, and a second application at 50% heading. If economics only allow for one application, shoot for early heading, when 20-50% of the panicles have emerged from the boot. Remember that even if you don't see leaf blast, neck blast can still develop in the field if blast is in the area.

The period between panicle initiation (PI) and heading is critical with respect to grain formation. During this time, cold temperatures can result in pollen sterility as the plants go through meiosis. Pollen sterility results in blanking. Nighttime temperatures below 58 oF can result in sterility. The Figure shows the relationship between average low temperatures during booting and statewide yields. Data are from 1992 to 2018. The data represent the average low temperature for a 15-day period beginning about one week after panicle initiation to one week before heading.

Varietal selection is important to minimize blanking. Varieties such as M105 and M206 are more cold tolerant than M209, for example. However, all varieties can be negatively affected by cold temperatures during this period. One way to help minimize the damage is to raise the flood water height in the field during this time to 6-8 inches (or more). The water acts as a blanket and protects the emerging panicle from cold temperatures.

This sensitive period during booting usually occurs in July. For rice planted in mid-May, the critical period is the last two weeks of July. I realize as I write this that it may already be a bit late for many growers. However, I am looking at the forecast and seeing nighttime temperatures in the mid-50s over the next few days in areas south of highway 20. 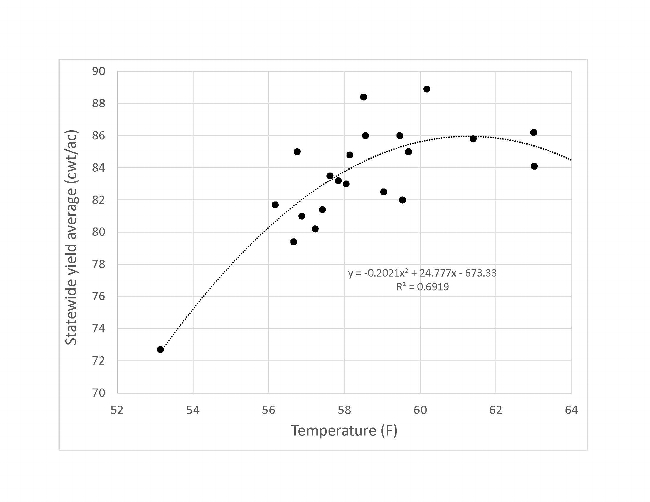 Weedy rice in a rice field in California.
The UCCE Rice Team will be starting a survey of weedy rice across the rice-growing counties in the next week. We are surveying fields that are known to have weedy rice infestations (from reports from the past 3 years). We will use this opportunity to update the extent of the infestation, collect samples, and pull out as many weedy rice plants as possible (from fields that have low infestations).

If you are a grower or PCA with a field that has had an infestation in the past, we will be reaching out to you to let you know when we will be visiting.

A big thank you to the California Rice Commission for providing the funding for this survey. For more information about weedy rice in California, visit caweedyrice.com.

There are a couple of interesting issues I have noticed while looking at fields, mostly in the northern part of the valley. One is bakanae. Bakanae is a seed borne disease that is managed by soaking the seed in sodium hypochlorite or bleach. Levels are very low and is not going to affect yield. Affected plants are taller than the rest, tend to be lighter green and chlorotic. The tell sign that the problem is bakanae is the rotting of the crown. Affected plants will die before producing a panicle or will produce a blanked panicle.

Another interesting issue I found is young plants affected by aggregate sheath spot. Usually I don't see this disease being severe this early, but in this field a large patch seemed affected.

I have heard blast is present in the Willows and Maxwell areas, but I have not seen any yet. Usually, a tell sign of leaf blast is burned circular areas near headlands, where N overlaps are. But make sure to inspect closely. In one field, the dead circles were not caused by blast, but most likely by rats or muskrats that had cut the rice and created a sort of nest. Fact Sheet #2: Managing Potassium in Rice Fields
The UCCE Rice Team has developed a series of Factsheets to simplify and convey information about important topics that we find we are frequently discussing with growers and PCA's. Each fact sheet is 2 pages long, back to front.

We are continuously in the process of developing more topics, so if you have suggestions, please reach out to Luis Espino (laespino@ucanr.edu) or Whitney Brim-DeForest (wbrimdeforest@ucanr.edu).