Last year, this pest was present in large numbers during August and September. The idea is to have additional data from the pheromone traps to inform the IPM decision making process. Below is a table showing the number of moths per day and per trap since February.

Table 1. Male diamondback moth captures by pheromone traps across the Salinas Valley. There are two type of traps deployed in the fields. We have the cardboard traps labeled as 'Regular' and also the automated traps labeled as 'Automated' and shown in Fig. 1. Fig. 1. Automated trap (provided by AgCeleration and manufactured by TrapView) in a broccoli field. This type of trap has four cameras on top of the sticky liner. Cameras will take daily pictures. Pictures are analyzed to recognize the adult of diamondback moth. This trap uses a cellular connection to transmit the pictures daily to a centralized computer. The computer will use machine learning to recognize and count new moths getting stuck onto the liner.

To put these captures on a time perspective, the below time series graph shows the fluctuation of the diamondback moth captures since we set up the traps. The below graph does not include the data from the automated traps. Capture data is broken into a series labeled 'Castroville' (dotted line) indicating the moth captures from that specific location, and a second series labeled 'Other' (solid line) where the average captures among the other locations are presented.

If you are interested in learning more about this monitoring program, please contact Alejandro Del-Pozo at adelpozo@ucanr.edu or 831-759-7359.

We are happy to announce that the diamondback moth capture data, presented as maps, is now housed in our own University of California Cooperative Extension Monterey website.

These maps use the closest town or landmark where the traps are located to show moths per trap per day. Moth captures are presented as yellow bubbles. The bigger the bubble, the larger the population of moths is.

On the same page, you will also find the overall population fluctuations of these moths in the Valley, as a series chart.

We also stored the overall fluctuation of aphids and thrips numbers, captured in yellow sticky cards in our UCCE Monterey website. To access to these bar charts, click on the link below:

If you would like to learn more about these three monitoring programs happening in the Salinas Valley, do not hesitate to contact Alejandro Del-Pozo at adelpozo@ucanr.edu or 831-759-7359. 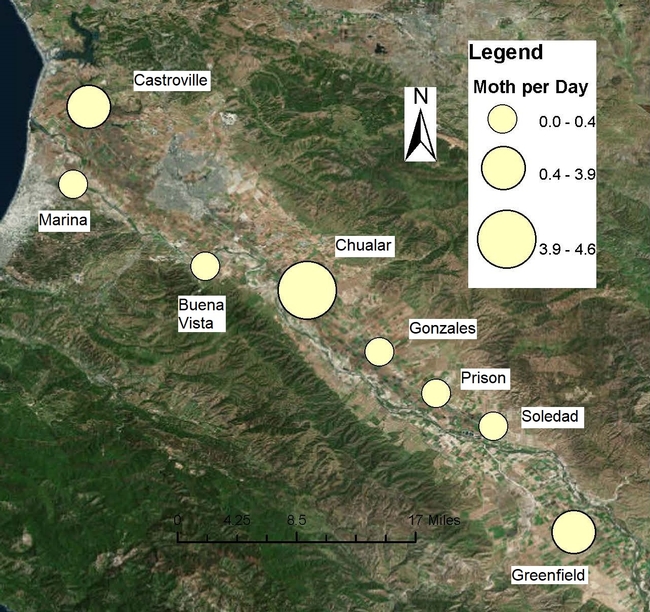 We continue the effort of monitoring diamondback moth (DBM) across the Salinas Valley using sex pheromone baited traps, as shown in the picture above. We have been adding additional traps to cover a larger area along Highway 101. We have daily moth capture data from Castroville to Greenfield. The chart below summarizes these daily captures from our pheromone traps. As stated in a previous blog post, higher numbers of DBM have been usually recorded in Castroville. It seems like we just passed a generation of adults during late March to early April. Currently, DBM capture numbers are going down. Lower adults in the system could be paired with more caterpillars feeding on several host plants. From the chart above, there was a flight of aphids during late March to early April. Some PCAs mentioned to me that foxglove aphid started to show up in their fields during that time period. It seems now that winged aphid numbers are going down. However, it does not mean that numbers of aphids in our crops are decreasing. We might be facing higher population of wingless aphids in our crops right now.

We need to keep an eye on population dynamics of thrips in the Valley. The ultimate goal is to be better prepared this season to manage those creatures and reduce the incidence of INSV virus. The chart below shows captures of thrips in our sticky cards. It seems like thrips populations had a spike two weeks ago. Currently, thrips numbers are going down. I believe that keeping track of the fluctuation of thrips numbers in our Valley would help us detect large populations of this pest. There is a need to alert PCAs when the front of a 'thrips wave' would happen.

If you are interested in getting more information on this monitoring effort, please do not hesitate in contacting Alejandro Del-Pozo at 831-759-7359 or adelpozo@ucanr.edu.

BMSB adult lays eggs in masses and typically an egg mass consists of ~28 eggs (Fig. 1). There are five immature stages (Fig, 2). In general, adult females are bigger in size than males. Identification of BMSB is not difficult. It has few unique features, which separate it from other native stink bug species in northern central coast of California. BMSB (both adult and nymphs) has two white bands on both antennae on the head and a white band on all the legs as well (Fig 3). These features separates BMSB from native stink bugs, for example, the consperse stink bug (Fig. 4).

At this point, it is critical that we monitor BMSB in our area and potentially delay its establishment using management tools. We are not sure what impact BMSB would have on small fruits, strawberry, or vegetable production in the central coast areas. Also, please let me know once you find one. You could reach me (Shimat Joseph) or Mark (Mark Bolda by email (svjoseph@ucdavis.edu or mpbolda@ucdavis.edu) or phone (831-759-7359).

For further reading, please find the attached UC IPM pest alert and summary of BMSB research in its native range in Asia.