Cabbage maggot (Delia radicum) is a serious insect pest of Brassica crops such as broccoli and cauliflower in the Central Coast of California. These crops are grown throughout the year; as a result cabbage maggot problems persist year long.Cabbage maggot eggs are primarily laid in the soil around the crown area of the plant. A single female fly can lay 300 eggs under laboratory conditions. The eggs hatch within 2-3 days and the maggots feed on the taproot for up to three weeks and can destroy the root system of the plant. The maggots pupate in the soil surrounding the root system and emerge into flies within 2-4 weeks. Severe cabbage maggot feeding injury to the roots cause yellowing, stunting even plant death.

The efficacy of 29 insecticides was determined against cabbage maggot through a laboratory bioassay by exposing field collected maggots to insecticide treated soil immediately after application. Three parameters were used to evaluate efficacy (1) proportion of maggots on the soil surface after 24 h, (2) proportion of change in weight of turnip bait, and (3) dead maggots after 72 h. Based on the assays, 11 insecticides performed better and they were Mustang, Torac, Danitol, Belay, Capture, Warrior II, Lorsban, Mocap, Durivo, Pyganic and Vydate in the order of highest to lowest efficacy. Eight insecticides were selected based on superior efficacy to determine the length of residual activity on cabbage maggot larvae. The persistence of insecticide activity was greater with Capture, Torac and Belay than with other insecticides tested.

The mode of exposure of insecticides in this study was entirely by contact (through skin) and other modes of exposure such as ingestion (through mouth) or through respiratory holes (spiracles) were not investigated. Some of the insecticides tested in the study were insect growth regulators (IGRs) (Dimilin, Rimon, Trigard, and Aza-direct), which normally interfere with the growth and development of the insect and they showed a low efficacy against cabbage maggot larvae. Entrust (spinosad) showed a moderate efficacy possibly because the primary mode of exposure to Entrust is by ingestion. The diamide insecticides (Beleaf, Coragen and Verimark) have systemic activity as they move within the plant and likely away from the site of application. It is possible that the soil applied diamide insecticides are absorbed by the roots and translocated to the above ground plant parts with little effect on the feeding larvae in the tap roots.

This study was conducted under controlled conditions in the laboratory and the results may not be entirely consistent in field conditions. The Brassica fields in the California's Central Coast are profusely sprinkler irrigated up to three weeks after sowing to ensure uniform germination and proper establishment of plants. It is likely that applied insecticides are partially or completely leached out of the root zone area without providing anticipated maggot control. In this study, insecticides were drenched into the cup and none of the applied insecticide solution leached out. Therefore, it is likely that the insecticides were more effective in the laboratory assay than they would be in the field. Certain insecticides such as pyrethroids tend to bind to the soil organic matter. The organic matter in the California's Central Coast soils can be up to 4%, which could reduce the availability of soil applied pyrethroid insecticide to the root zone where cabbage maggot larvae typically colonize. In situations with poor insecticide spray coverage, invading cabbage maggot larvae are possibly exposed to no or sub-lethal doses of the soil applied insecticide and may be able to penetrate the soil and infest the roots. The air temperature in the field at the time of insecticide application may influence the efficacy of the applied insecticide. The efficacy of pyganic decreased as the temperature increased against onion maggot. This suggests that application of pyrethroid insecticides should be avoided during warmer periods of day.

In conclusion, 11 insecticides with high efficacy were identified for future investigation. Future studies will focus on determining the effects of application timing and delivery methods compatible with cabbage maggot incidence in both directly sown and transplanted Brassica crops in the Central Coast of California. 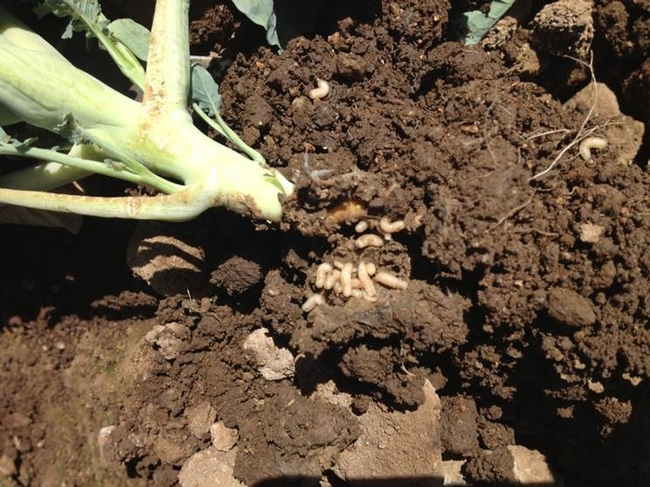 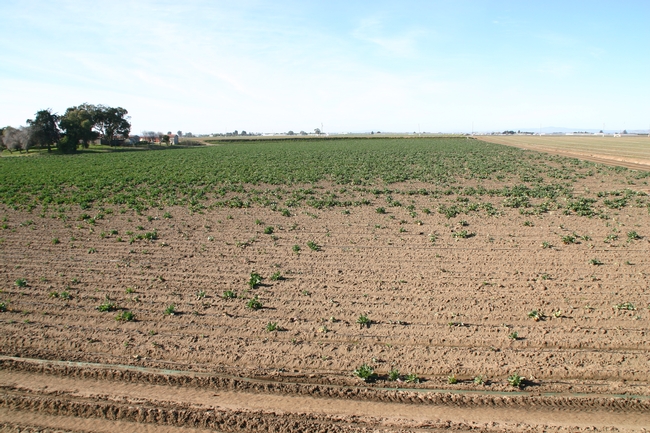 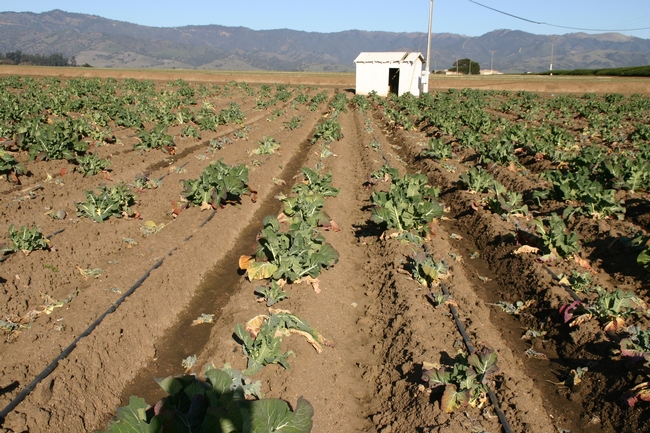 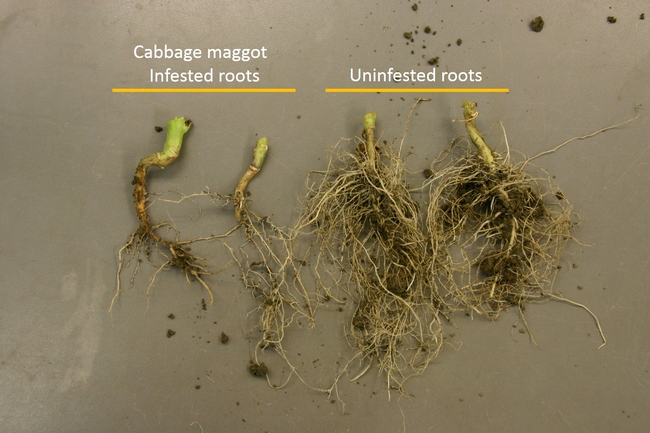 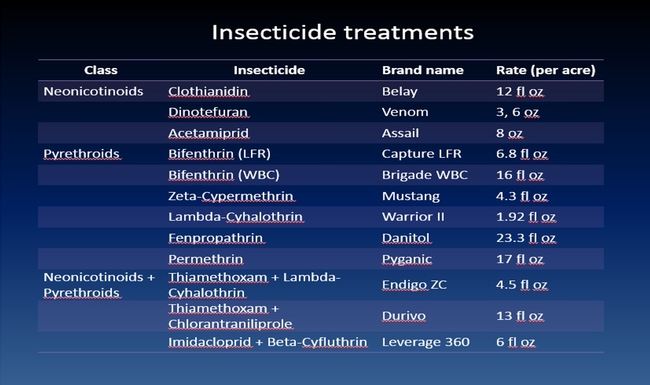 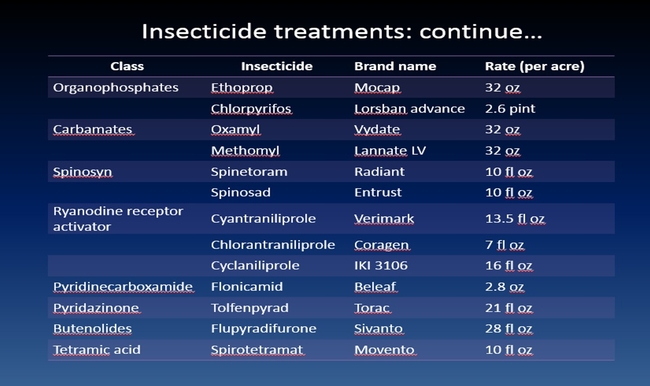 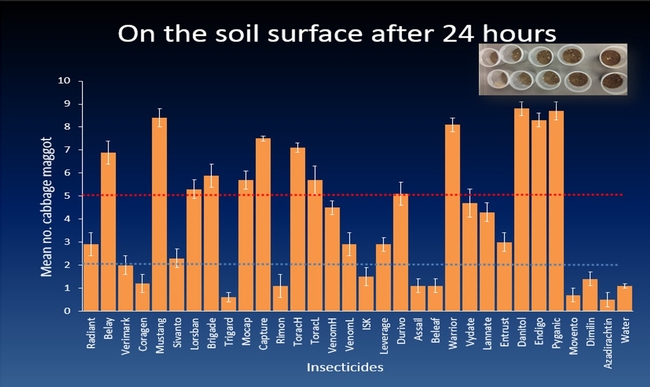 Efficacy of insecticides based on larvae failed to penetrate the soil surface. The abbreviation L = lower rate and H = higher rate 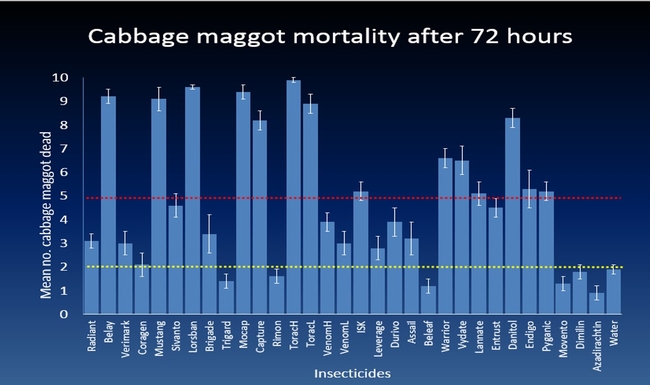 Efficacy of insecticides based on number of larval death. The abbreviation L = lower rate and H = higher rate 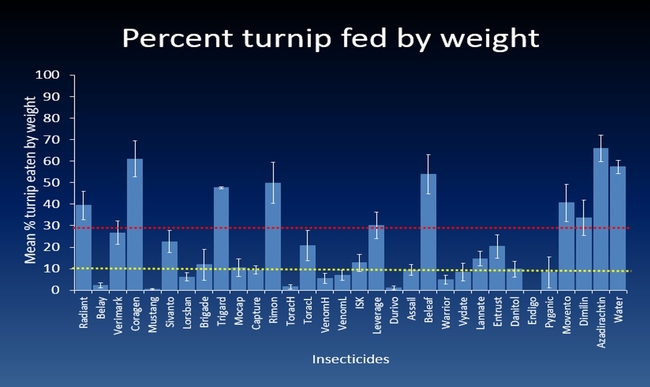 Although this bug feeds on a wide range of hosts, we are more concerned because the bug prefers cruciferous hosts (Family: Brassicaceae) including broccoli and cauliflower, which are grown as rotation crops in the Salinas Valley. It is believed that other major crops especially lettuce and spinach are NOT a suitable host for bagrada bug. At the same time, bagrada bug can survive on cruciferous weeds such as mustard species (Brassica sp), wild radish, London rocket, short pod mustard and shepherd’s purse, as well as the insectary crop sweet asylum. Mustard weeds species are very common in the Salinas Valley along ditches, roadsides and even along the edges of agricultural fields. Other species of mustards such as white mustard (Sinapsis alba) and Indian mustard (Brassica juncea) are grown as cover crops. It is clear that given the abundance of mustard family weeds and crops, there is a readily available source of habitat for this insect in the Salinas Valley.

It is believed that bagrada bug overwinters as adult in the cracks and crevices in soil or on plants. Generally, female bug is larger in size than male. Eggs are laid on the underside of leaves, cracks and crevices in soil or on hairy stems. There are five nymphal stages for bagrada bug. Typically, bagrada bug is found in aggregation with various nymphal stages and adult rather than individuals (Fig. 3). Because Salinas Valley has relatively mild temperature through year, it is expected that the development of bagrada bug would be prolonged compared with its populations in the warmer regions where it has been established. This also indicates that, if the bug is established, the number of generations of bagrada bug would be fewer in the Valley than in the warmer locations such as southern California or in the desert regions. Normally, its population size is small during early spring to mid-summer but eventually increases in size during later summer or fall.

At this point, preventing the dispersal of bagrada bug to the Salinas Valley is the key strategy. Growers often move plant materials including transplants to the Valley for production from the regions where the bug has been established. Special care should be given to inspect the plant materials while moving them. Monitoring for bagrada bug during mid-day hours might increase the probability of finding them as the bugs typically hide and stay in the cracks and crevices or on the underside of leaves when the temperature is on the cooler side. Cruciferous weeds in the drains, river bottoms, edges of the field or near residential area increase the risk of establishment. Based on the insecticide efficacy studies conducted in University of Arizona, pyrethroids and neonicotinoids are effective in reducing bagrada bug infestation and injury. For organic growers, none of the products are efficacious but pyrethrin and azidirachtin are suggested.

If you detect bagrada bug in Monterey, Santa Cruz and San Benito Counties, please do not hesitate to contact me at svjoseph@ucdavis.edu or (831) 759-7359.

White mold disease, caused by the fungus Sclerotinia sclerotiorum, is causing damage to a number of vegetable crops in California and Arizona during the late 2010 and early 2011 months. On the coast of California, white mold is being found on crucifer crops such as broccoli and cauliflower. In the desert regions white mold is causing damage on broccoli, cauliflower, celery, lettuce, and other vegetables (for lettuce this disease is commonly called lettuce drop). White mold incidence on these crops appears to be greater than normally observed. See photos 1 through 6 below.

The first symptoms on most vegetable crop hosts are small, irregularly shaped, water-soaked areas on stems, leaves, pods, or flower heads. These infections quickly develop into soft, watery, pale brown to gray rots. Rotted areas can expand rapidly and affect a large portion of the plant. Diseased tissues eventually are covered with white mycelium, white mycelial mounds that are immature sclerotia, and finally mature, hard, black sclerotia. Mature sclerotia usually form after tissues are rotting and breaking down. Plants with infections on the main stems can completely collapse and fall over.

The black sclerotium is the survival stage of the fungus and can measure from ¼ to ½ inch long. Sclerotia are found in the soil and can directly infect plants if stems are in close proximity. However, these winter cases of white mold are due to ascospore infections. If sufficient soil moisture is present, shallowly buried sclerotia germinate and form small, tan mushroom-like structures called apothecia (photos 7 and 8). Ascospores (photos 8 and 9) are released from apothecia and carried by winds to the host plant. These ascospores are responsible for these winter infections and result in disease of the above-ground parts of plants. The relatively cool, moist weather found in most regions has allowed for the production of apothecia production and ascospore releases.

For ascospores to start colonizing plant tissues, nutrients and plant fluids from damaged tissues are usually needed. This is why white mold is very severe if ascospores land on compromised tissues such as lettuce leaves with tip burn, leaves and heads damaged by frost or other factors, stems with open wounds or exposed leaf traces (vascular tissue in the stem that is left exposed when a lower leaf falls off), and senescent leaves and stems.

Controlling white mold under these winter weather conditions is difficult. Protective fungicides provide some assistance and can be used effectively in lettuce. However, such fungicides need to be applied prior to ascospore flights and usually will require multiple sprays. Fungicides may not be warranted for crucifer crops.

Steve Koike thanks Jeff Rollins and Karen Chamusco for assistance with photographs for this article.