Most growers know the N-P-K numbers on fertilizer, but that doesn't tell you what else might be in the material, either as a contaminant or something purposely added to the material.  CA Department of Food and Agriculture has a website that according to manufacturer and material there is a full listing of what is in the product.  The website is: http://apps4.cdfa.ca.gov/fertilizerproducts/

What's startling is the shear number of producers on the market 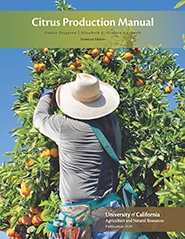 As growers of thousands of ornamentals we understand that minerals absorbed mostly by roots as ions are essential for plant growth and development. Some required in parts per hundred are macro-nutrients while others only required in ppm or ppb are considered micronutrients. As long as enough of the 18 essential minerals are available, plants grow and reproduce in a healthful way. When not enough of one of the essential elements is supplied, a deficiency occurs and plants present symptoms.   Mineral nutrient symptoms are considered abiotic disorders. There are however cases where excess or deficiency of elements can be predisposing to disease caused by pathogens. While examples of this are not abundant, some mineral elements do have a role in the development of disease caused by some pathogens.

Soil-borne pathogens are affected by minerals dissolved in soil solution. Minerals can act in specific ways (specific ion effects) or total ion effects (osmotic strength/concentration) having direct effect on pathogenic propagules or on the host itself. If we utilize the plant disease tetrahedron and think of all the implications ions could have in a biological disease relationship there are several possibilities:

While it is often espoused that the well “fed” or fertilized plant it is resistant to disease it is rarely borne out in any research. Keeping a good nutritional level in nursery stock will not necessarily protect plants from many of the virulent pathogens that are capable of causing disease. Nitrogen fertilization can produce succulent growth that will lead to exacerbation of such diseases as powdery mildew (Powel and Lindquist, 1997). Too many mineral nutrients may only result in luxury consumption by the fertilized plant or may cause other problems.   It has long been known that seedling disease caused by Rhizoctonia solani increases with increased salinity in media (Baker, 1957) and later discovered by Jim Macdonald and others (1984), that salinity increases susceptibility of ornamental plants to Phytophthora.

Two basic plant resistance mechanisms that mineral nutrition can affect in plants are: 1.) formation of mechanical barriers (cell wall strengthening) and 2.) synthesis of defense compounds that protect against pathogens (Spann and Schumann, 2010). The role of specific elements and their compounds is much more complicated. Certainly deficiencies of molecules such as Calcium and Potassium can interrupt either of these defense mechanisms.

Root rot is a disease of thousands of ornamental plants and a serious problem in most nurseries. Root rots caused by Phytophthora spp. occur in a range of nutritional environments and pH’s. While some studies have implicated nitrogen compounds in the control of Phytophthora these probably involve the release of ammonia which is also toxic to plant roots (Zentmeyer, 1963). Lee and Zentmeyer (1982) later showed that both ammonium and nitrate reduced disease caused by P. cinnamomi , and that low levels of nitrate stimulated production of sporgangia. Most studies have found no relationship of nitrogen source to root rot disease development. Zentmeyer’s early work also suggested a role for calcium in disease reduction caused by Phytophthora root rots.   Calcium increases disease resistance to root rot in Avocado (Duvenhage and Kotze, 1991).   While it is understood that calcium has direct effects on plant membranes, root cell membrane leakage, cell wall thickness and many other host factors, Messenger (2000), later showed that the calcium ion also has direct effects on Phytophthora, reducing its sporangia size and zoospore mobility. Soils and media low in soluble calcium or where calcium is easily precipitated out of solution, or where pH is high and limestone minerals decrease the availability of calcium, are conducive to Phytophthora root rots.

Wilt diseases have also been studied in relation to disease occurrence. Keim and Humphry (1984) showed that nitrogen source reduced the incidence of wilt cause by Fusarium oxysporum f.sp. hebe in Veronica.   In their system ammonium sulfate promoted disease and calcium nitrate prevented fusarium infections. In later work on the Fusarium oxysporum wilt disease of Canary Island date palm, Downer and others (2012) found no effect of fertilizer source on disease development (2013 ). Every disease system must be considered independently to determine if nutrient relationships are part of that system.

While it is easy to see a role for essential elements in plant defense, non-essential elements may also play a role in some systems. Silicon increases resistance of plants to powdery mildew (Kauss and others, 2003) and root roots (Cherife et al., 1994) and to stress in general (Ma, 2011). Silicon is implicated not only in strengthening cell walls but in defense protein production in plants (Faufeux et al., 2006). Not all plants are capable of utilizing silicon, so its role in plant defense is limited to those species capable of metabolizing it.   Much more study is necessary to understand silicon’s role with ornamental plant –pathogen systems.

Nutrient exchange in container media is complicated-- it is mediated by the substrate, water chemistry, temperature and the applied ion sources as well as by plants growing in the media. Growers are well served to apply fertilizers that can supply a constant nutrient charge. Supply of extra soluble calcium, may be helpful in managing root rots.   Avoidance of salt built up or high salinity situations that can occur when plant dry out will also help keep plants from

Duvenhage, J.A. and J.M. Kotze. 1991. The influence of calcium on saprophytic growth and pathogenicity of Phytopthora cinnamomi and on resistance of avocado to root rot. South African Avocado Growers Yearbook 14:13-14.

Ma, J.F. 2011. Role of silicon in enhancing the resistance of plants to biotic and abiotic stresses. 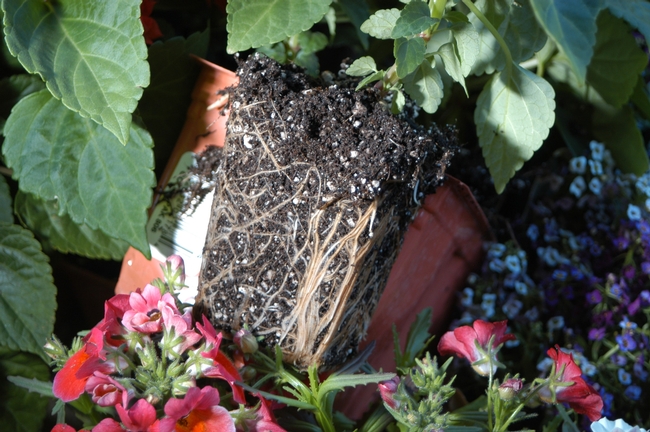 Citrus and avocado are of subtropical and tropical origin are cold-tender plants that have not developed the effective cold hardening process of deciduous trees that drop their leaves and go dormant. Even within deciduous, temperate tree species there are ranges of frost tolerance. Subtropicals do have the capacity to develop some cold tolerance and this is by going through quiescence, a sort of resting condition of no or slow growth when cooler temperatures arrive. Quiescence is induced several weeks after 40-50 degree F temperatures arrive. Cold tolerance develops most when trees are not flushing. The healthier and less stressed the tree, the more responsive it is to the cooler temperatures that induce quiescence. A tree that has been recently pruned or nitrogen fertilized is more likely to continue flushing through the cold-induction of early winter and is more subject to cold damage. Unfortunately along the coast, there can be warm temperatures that occur during the winter. This can break quiescence and the trees start flowering or flushing and when cold weather arrives again, the trees are now more susceptible to cold.

Because an evergreen canopy like avocado continues to transpire, the roots of subtropicals continue to operate to deliver water to the leaves. The leaves though are not doing much other than losing water. Therefore, there is not much demand nutritionally on the part of the tree. In fact, fertilizing with nitrogen can break the quiescence and make the tree more susceptible to cold. The tree already stores the bulk of its nutritional needs in the roots, branches, stems and leaves and can call on nutrients if it needs them. Supplemental fertilizer at the time of quiescence, though, can result in an excess of the tree’s needs and induce flushing. The goal is to go into winter with adequate storage, so that when spring comes, the nutrients are there for the demanding flowering period. Adequacy is based on previous fertilizer applications, tree condition, leaf analysis and crop load. Nitrogen applications applied in winter are also susceptible to high losses from leaching and volatilization, resulting in environmental problems.

So fertilizer timing starts with when the first frosts might come. Along the coast in Southern California, the last nitrogen application should be no later than October 1, in preparation for frosts than can occur in December. Nitrogen can resume March 1 in most cases. Then the next issue is how frequently to apply nitrogen after that. The more frequent/small applications that are made, the more efficiently it is taken up, so the less that is required. Continuous injection is ideal, but most operations are not equipped to do it this way. Setting a monthly time for injection, such as the first of the month, is the next most efficient. Whatever timing you use, though, nitrogen applications should be confined to the spring and summer months with some possible in early fall.

As for potassium, it is not so liable to cause flushing and is not so susceptible to leaching and has no volatilization. It can be applied most any time and will not go anywhere other than through erosion, waiting for the tree’s roots to absorb it. Microelements such as iron and zinc though, need an actively growing root system for uptake. Their soil application should be limited to the summer time.

Chemicals are often injected through irrigation systems, hence the name chemigation.  When applied to fertilizers, it is called fertigation.  Surprisingly many growers still apply fertilizers by hand, however the predominant use of micro-irrigation systems  in avocados readily lends itself to fertigation. This compatibility is due to the frequency of operation and the control the operator has over the system.  If the uniformity of the system is high, applying fertilizers through the irrigation system can improve fertilizer distribution, allow for flexibility in fertilizer timing, reduce labor in spreading materials, allow for less fertilizer to be used and can lower costs relative to hand applications of fertilizers.

Many different materials may be injected, including organic fertilizers, dry fertilizers and liquids.  The major fertilizer injected is nitrogen, but potassium and micronutrients, as well as water treatments, such as urea-sulfuric acid are also injected.  The important point to remember is that the materials must be soluble.  Fertilizers delivered as a solution can be injected directly into the system, while those in a dry form must be mixed with water to form a solution.

Fertilizer material differs widely in water solubility, with solubility depending on the physical properties of the fertilizer as well as on irrigation water quality. Agricultural grade fertilizers and amendments are often coated to inhibit moisture absorption and to assist in material flow through machinery.  These coatings and other foreign materials can cause clogging problems in the mixing tank, as well as the irrigation system.  The foreign material exists in the tank as sediment or as a scum on the surface.  To prevent problems, stock tanks should be agitated until the material is dissolved.  To further prevent problems, the solution should be filtered between the stock tank and the injection point, and the injection point should be upstream of the irrigation system filters.

Irrigators wishing to inject chemicals have a variety of injection equipment from which to choose, including differential pressure or batch tanks, venturi devices and positive displacement pumps.  The most expensive are displacement pumps that are powered by electricity or water.  They put out precise amounts of material.  Venturi and batch tanks are much less expensive and are relatively simple to operate.  Their major drawback is that they require a pressure loss to force the material into the irrigation system.  A 10 - 30 psi pressure differential is often required and in some places this differential is not possible.  In that case a fractional-horsepower pump can be used to provide the pressure differential.  Neither of these devices is as precise as the displacement pumps.  However, fertigation does not require a fixed concentration of solution, only a known amount of applied material.  And these pressure differential applicators do the job very well. 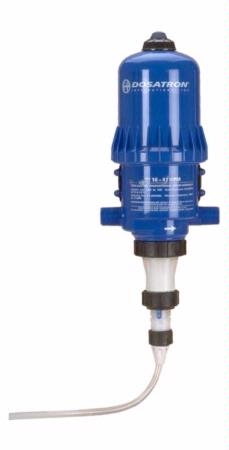