How One Entomologist Found His Calling as an IPM Facilitator

Alejandro Del Pozo-Valdivia, Ph.D., is currently an IPM entomology advisor at the University of California Cooperative Extension. He serves the vegetable industry in the Central Coast region of California by conducting applied research on pest management and implementing an extension program for stakeholders.

Alejandro was born and raised in Lima, Peru, where he earned his bachelor's degree in agronomy from La Molina National Agrarian University. Then, he went to Washington State University, where he obtained his master's degree in...

Early in life, Surendra Dara decided that no matter which field he chose, he needed to make an impact on it. Always interested in science, he chose agriculture and specialized in entomology.

“It attracted me because it dealt with arthropods and there are a lot of physiological similarities to the human world,” Dara said. “It was also critical for growing food and feeding humans.”

Dara is now an entomopathologist with the University of California's Division of Agriculture and Natural Resources in San Luis Obispo, and has an... 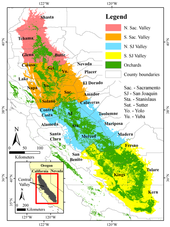 "This article received more than 1000 views in less than a day," Pathak wrote in an...

Overhead irrigation is one of the promising techniques being used in conservation agriculture systems.

Record winter rainfall during the 2016-17 winter has enabled farms to emerge from survival mode in the short term, but scientists are still working hard to be ready for the next drought, reported Tim Hearden in Capital Press.

Humiston (in red jacket) stands on what was a Salton Sea boat ramp 12 years ago. The Imperial Irrigation District works with UCANR to deal with reduced water flows to the human-made body of water.

Glenda Humiston, the UC Agriculture and Natural Resources vice president who was appointed to her position last summer, toured the Imperial Valley yesterday to become familiar with agricultural and environmental issues in the state's southernmost desert region, reported Edwin Delgado in the Imperial Valley Press.