That impact may not be known for a while. UC Cooperative Extension forest advisor Yana Valachovic said the spike in tree deaths typically occurs the year following the spring rains, making 2020 a year of particular concern.

“One of the issues that becomes very apparent is that when we have these peak episodes of mortality, there isn't much funding to help us manage those impacts,”... 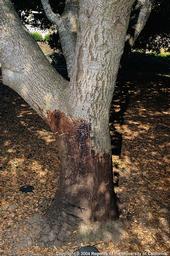 The most reliable early symptom of sudden oak death is dark sap exuding from trunk base, as on this coast live oak. (Photo: UC IPM)

This was the first such gathering in this county since tests confirmed that the disease made its way south of Monterey County, according to event coordinator Mary Bianchi, director of UC Cooperative Extension in SLO County. But there will be more meetings to come, she...

Thirteen years after sudden oak death was first detected in California, the disease's range in northern coastal areas of California and southwest Oregon continues to grow, according to a report by Michael Joyce on Jefferson Public Radio.

"For me, the challenge is communicating to the public the disease has...