EFNEP helps us eat well on the cheap

Last week (Jan. 31, 2011) the U.S. Department of Agriculture released its revised 2010 Dietary Guidelines for Americans. They are “the federal government's evidence-based nutritional guidance to promote health, reduce the risk of chronic diseases, and reduce the prevalence of overweight and obesity through improved nutrition and physical activity,” according to the press release.

I scanned the press release for news that cookies have been designated an essential food group. No luck. I confess, I didn’t read the entire 95-page pdf, but surely any such rocking revelations would have been reported in the press release.

Because more than one-third of children and more than two-thirds of adults in the United States are overweight or obese, the guidelines emphasize eating less and moving more.

I wasn’t surprised to see among its 23 key recommendations the advice to drink more water instead of sugary drinks, eat a variety of healthy foods and reduce salt. I expected the recommendation to eat more fruits and vegetables, but now it’s more explicit. They say half of my plate should be covered in fruits and veggies. And mix it up – eat a variety of vegetables and protein sources. (I used to eat broccoli beef almost every day for lunch, until the day I found an insect in it.)

Many people think they have to spend more for nutritious meals, that fresh produce and meat are expensive. However, UC’s Expanded Food and Nutrition Education Program, or EFNEP, gives tips on how to make healthful food choices when you’re on a limited income. (Unless your name is Mark Zuckerberg, whose income isn’t limited?)

Chapter 6 of the Dietary Guidelines acknowledges that our environment – composed of school, workplace, social groups, culture and so on – influences our food and exercise choices. However, our communities don’t excuse our behavior because ultimately we make our own choices, it essentially says. We may have more access to healthy foods and opportunities to engage in physical activity than we realize. Connie Schneider, EFNEP Council chair, sees EFNEP as a vehicle to help families navigate their complicated food environments.

“Our educators facilitate group discussions to resolve food issues from shopping on a budget to getting their children to eat healthier foods,” said Schneider, who is also a UC Cooperative Extension nutrition advisor.

The EFNEP staff meets with families and children in a variety of community settings, including schools, shelters and transitional housing. Nutrition educators teach them how they can stretch their food dollars and still enjoy a healthy diet. They share recipes for nutritious meals that are simple to prepare as well as inexpensive. I love to eat, but have little patience for cooking. Watching a nutrition educator demonstrate how to make chili, I found myself thinking, “That’s so quick and easy, even I would do that.”

Sometimes a new way of preparing a familiar vegetable encourages me to eat more veggies.

The EFNEP website spotlights a Fresh Pick of the Month, such as cauliflower. The site gives the nutritional benefits of cauliflower, serving tips and recommendations for handling and storing the vegetable. It also provides a recipe for cauliflower soup.

The nutrition educators also publish monthly newsletters, in English and Spanish, featuring a recipe and healthful suggestions, such as walking to the restaurant and sharing entrees when you go out to eat. Although the nutrition program is designed to assist families and children whose resources are limited, we can all use the suggestions to improve our health and save some money. 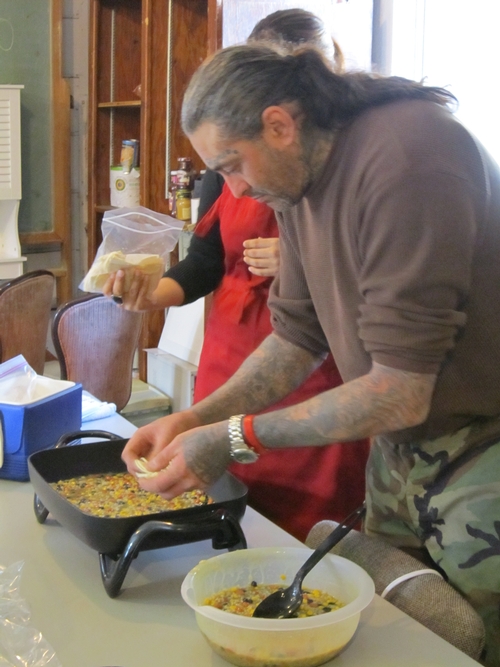