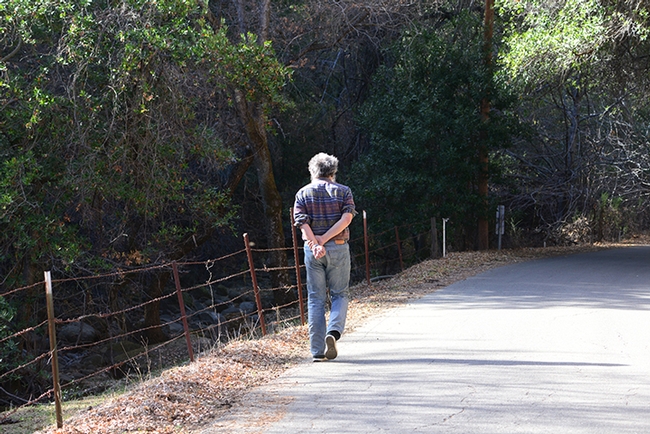 It's the earliest he's ever seen the Pipevine Swallowtail in Gates Canyon, Vacaville, one of his 10 fixed study sites in California's Central Valley.

It is Saturday, Jan. 25. Another day to monitor the butterfly population, something he's been doing for 42 years. He posts much of his information on Art's Butterfly World.

Shapiro has trekked up Gates Canyon since 1976. He aims for 26 visits a year. In 2013 he totaled 32 visits. In a typical season, he finds approximately 30 to 40 butterfly species, "but that's not reached every year by any means," he points out. "Last year the maximum was 31."

It's a long way up and back. Shapiro, who doesn't drive a motor vehicle, rides a bus from Davis to the Vacaville bus station, then walks three miles from downtown Vacaville to Gates Canyon Road; up the road three miles and down three miles; and back to the bus station. That's a total of 12 miles.

Shapiro works his route easily. He's like an Olympic skater as he walks up the hill: hands folded behind his back and sometimes on his hips; eyes constantly sweeping for the count.  He can, and does, detects the slightest movement, the slightest rustling of leaves, the slightest flutter of wings.

This Saturday Art Shapiro records eight different species of butterflies or a total of 18 individuals. And not just butterflies: he spots a yellow-faced bumble bee, Bombus voznesenskii, nectaring on radish next to a Pipevine Swallowtail. The road up Gates Canyon, Vacaville. (Photo by Kathy Keatley Garvey)
"That's the earliest I've ever seen the Pipevine Swallowtail and the yellow-faced bumble bee in Gates Canyon," he says.

Overall, it's a good day for "earlies." On Saturday, he sees his earliest Pieris napi, a Gray-Veined White, which beats his record of Jan. 31, 1984; his earliest Incisalia iroides, a Western Brown Elfin, eclipsing his previous records of Jan. 31 in 1976 and 1984; and his second earliest Erynnis propertius, Propertius Dusky-Wing, since Jan. 22, 1990.

Gates Canyon is bone dry. The thirsty hills and the dry creek beds ache for water. Alamo Creek, at the lower elevations, holds no water at all. At the higher elevations, the creek bed just trickles.

"Mid-70s, 90 percent sunshine (again, a few patchy altocumulus), light noth wind not getting into the upper canyon at all. No water in Alamo Creek at lower elevations; a bit more above than on Jan. 15, actually trickling audibly in spots. Vegetation little changed: alder and bay, nothing else in upper canyon (got up to ridgetop, where there is patchy bloom of manzanita and winter currant) except a totally anomalous native Lathyrus high on a sunlit, warm rock face, being visited by Battus (but I'm getting ahead of myself); somewhat more Raphanus down below, and very little Brassica. Aristolochia still dormant. The infamous 'poison oak tree' is leafing out but most poison oak is not. A few really small buckeyes are now in early leaf; hardly any green showing on big ones, even S-facing ones. No trace of Asclepias fascicularis. No Dentaria in flower and no detectable rosettes of Dodecatheon! Few birds. Still no Phainopepla. Deer and quail; no newts; no amphibian calls."

The 18 butterfly species he sighted at his Gates Canyon study site on Jan. 25:

Shapiro worries about the drought. On Tuesday, Jan. 28, he recorded: "Today was the 52nd and last consecutive day with no rain in winter--a record probably never to be equaled in any of our lifetimes (I hope)."

Meanwhile, his other nine study sites in the Central Valley await him. They are all over the map, just as he is. As he says on his website: "Ranging from the Sacramento River delta, through the Sacramento Valley and Sierra Nevada mountains, to the high desert of the western Great Basin, fixed routes at ten sites have been surveyed at approximately two-week intervals since as early as 1972. The sites represent the great biological, geological, and climatological diversity of central California."

If you're lucky enough to accompany him on a survey, you'll hear him point out butterflies as excitedly as a winner yells "Bingo! Over here! Over here!" 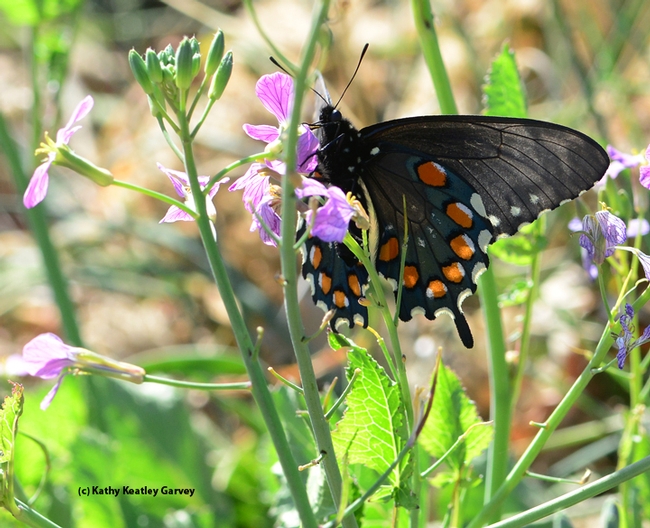 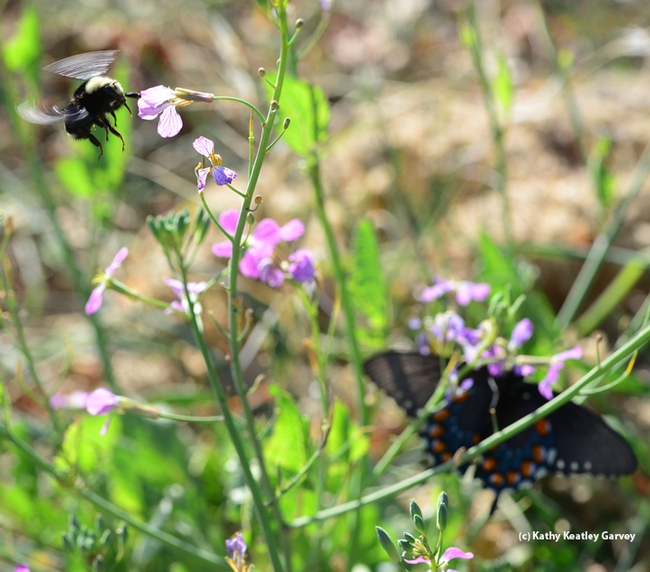 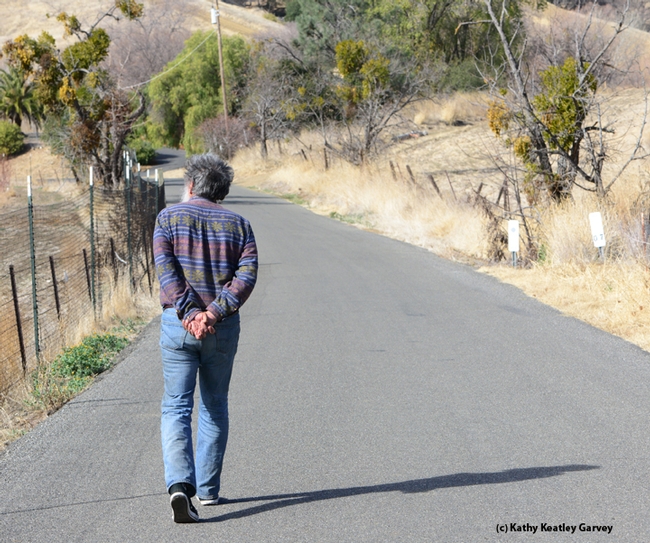 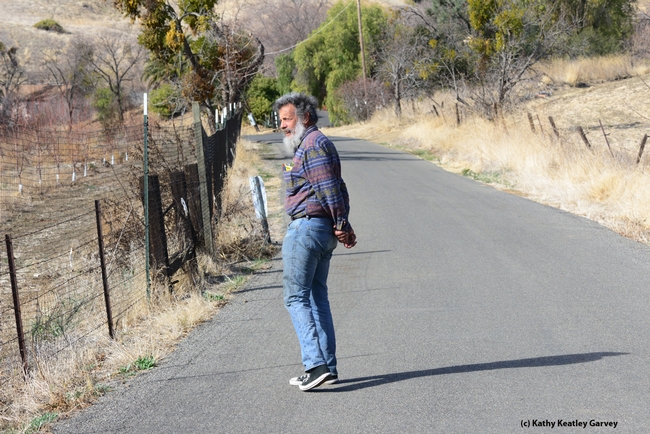 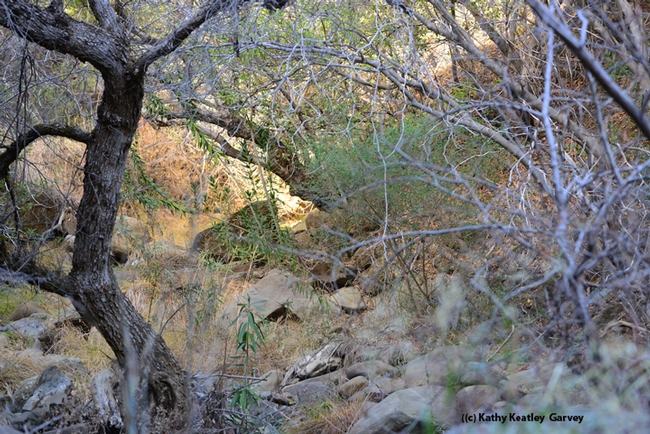 Gates Canyon is one of his "stomping" grounds, or "monitoring" grounds.

And that's where we saw about half-a-dozen butterflies fluttering on Jupiter's Beard (Centranthus ruber), also known as Red Valerian. The perennial is native to the Mediterranean region.

The pipevine swallowtail (Battus philenor) is what Shapiro calls "the signature riparion butterfly of our region (Northern California), occurring along streams in foothill canyons and on the Central Valley floor, essentially everywhere its only host plant, California pipevine or Dutchman's Pipe, Aristolochia californica, occurs."

"This species is warningly colored and inedible to vertebrate predators," Shapiro says on his website. "It derives its protection from the toxic aristolochic acids produced by the host, which it sequesters; females even pass these along to the eggs, which are also protected (and are brick red, laid in bunches of up to 20, and quite conspicuous).

Brick-red eggs? That must be a sight and a delight to see!

You can read more about the pipevine swallowtail on his website.

The first time we ever saw a pipevine swallowtail, it was in the clutches of a hungry praying mantis. (See photo on my Flickr site.) 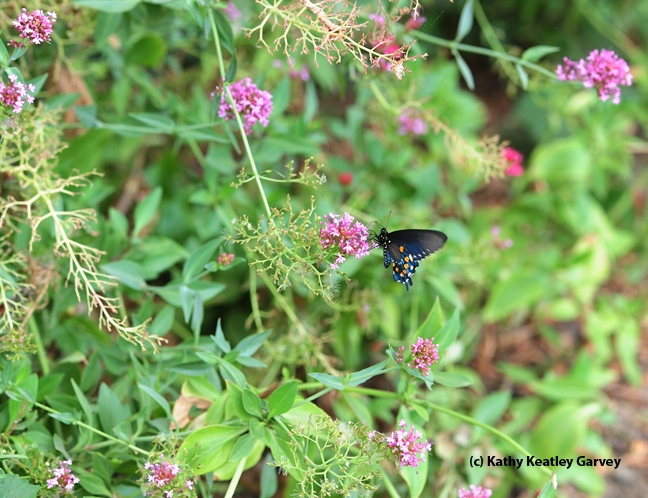 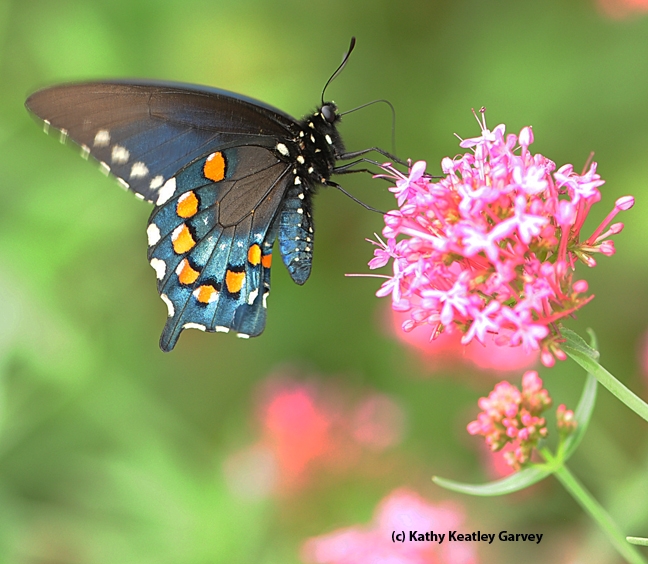