I always like to grow some flowers in my garden. I usually grow cosmos, zinnias, or marigolds, all of which do great in the Owens Valley.

This year I had a great plan to try to have my garden mostly done by July. It didn't work out, but before I abandoned that goal, I planted bachelor's buttons. These annual plants flower quickly, and I had hoped they would be ready in time for graduation day in June. And they were. Sort of.

Bachelor's buttons—also called cornflowers—are in the same genus (Centuarea) as many thistles that do great in California. Some in fact are terrible weeds like yellow star-thistle: C. solstitialis.

I've never grown them here myself, but bachelor's buttons are about the world's easiest thing to grow. Just maybe not in the desert when it's blazing hot. (In my defense, I suspected they wouldn't like our summer. I was trying to finish up the garden before the heat was unbearable in my back yard.)

Some Centaureas do like our climate. Centuarea montana, a similar looking perennial plant, looks nice in the Owens Valley. Centuarea cyanus, at least when direct sown in the garden, was a disappointment for me.

Here is what the flowers look like in the seed catalog: In my past experience growing them, that's a fairly accurate representation of what to expect.

Here is what I ended up with: Fried bachelor's buttons in my garden

As you can see in the picture, the flowers don't look so good. What's happening? Well, my garden is too hot. As soon as the blossoms open, they immediately desiccate. I suppose if I wanted to dry them that would be fine.

Bachelor's buttons like cool weather, and I planted these in early March. I had no issues with germination. They quickly popped up just like the weeds they're related to. Everything worked as planned, and my first blooms began Memorial Day weekend. (Hooray for planning ahead!) But then they just fried on the stems.

It could just be this particular mix. I'm sure it did fine in Oregon where the seeds came from. In my garden every day, even with ample water, these plants get a bit wilted in the afternoon. Other cultivars may do better, but I don't think I'll experiment again to find out which those may be. (If you have good luck with one, post in comments.)

From this experience, I'd recommend one of these strategies if you want to grow bachelor's buttons:

Higher elevation gardeners would probably be much happier with bachelor's buttons than I was. For my part, rather than moving up the grade and trying again, I think I'll stick with zinnias next year. Though it's been hard to tell with the fire/weather we're having during this craziest of all years—September felt pretty summery—the plants in my garden have been telling me for a number of weeks now that summer is finally ending. The mornings are cooler, the days are shorter, and the garden is responding. Salvia greggii is a star in the garden all year, but their show this time of year has given them their common name—autumn salvias. And so many colors! Purples and other shades are becoming easier to find, expanding the palette beyond the pinks and reds. The New Mexican sunflower (Helianthus maximiliani) is finally showing that its bloom is worth waiting for. The spindly but strong stems looked so close to withered during the long, hot summer it hardly seemed worth the water they cried out for. The Gaillardias, who rarely seem to miss a beat, are gloriously responding to the more moderate temperatures and longer nights fall brings to our hemisphere. The grasses have been recast from supporting actors to leading roles. The light of the sun, now lower on the horizon, suffuses the flower stalks of silver beardgrass (Bothriochloa laguroides), deergrass and its smaller cousin (Muhlenbergia rigens and M. dubia), and blue grama grass (Bouteloua gracilis and its named variety ‘Blonde Ambition' are both fabulous). And as the warm season fades, they will begin to shine more brightly. No group of plants can compare to the grasses in terms of solid year-round interest. Yes, they don't look great after their annual late-spring haircut, but by the time you cut them back, they should be very actively growing, so the awkward phase doesn't last long! After that, they provide a great green backdrop for the bloomers, waiting for their chance in the spotlight. Fall and winter is their time! Gallardia
You can see that your plants are happier, so this is the perfect time to establish new plants, and that is especially true for natives. Most of California has two seasons—hot/dry and cool/moist—a Mediterranean climate. While it's true no one would mistake the Eastern Sierra for the Central Coast, it's clear that this is our weather pattern too. So, our native plants build up their strength during the cool months, bracing themselves for the difficult, dry summer ahead. The dilemma one faces in starting native plants is that—though you are planting them so you won't have to water as much—that's only really gonna work out in the long run. In the short term, your new babies will require—like babies everywhere—a lot of attention. It's easier for them (and you!) that their formative days be spent under the milder days of October rather than an August inferno. The trick is to get them stabilized from transplanting well before the killing frosts get to them. Normally, waiting until the first week of October would make me nervous, but if September is the new August, then November is likely the new October, and September and October have been, in the past, the perfect month for transplants. Sure, we could have frost anytime, but a little bit won't bother most of them. There should still be plenty of time for little ones planted now to become established and be rarin' to go come spring.

Some of your new plants may not look too happy, but don't get discouraged—the transplant success rate for many natives is not good, so just know that you are doing the best you can. Spring is normally the time natives look best, so focus on how gratifying it will be when you see fresh, green leaves after a long winter's sleep!

These are some of the plants I am moving right now in my yard. Not all of them are Inyo County or even California natives, but all can deal with the tough environment the Owens Valley serves up:

Though I buy a lot of plants locally (I found goldenrod and a lot of other great stuff at High Country Lumber last week), other than the Native Plant Society's August sale, it can be tough to find native plants here, so I am always on the lookout for sources for plants when I travel. I've listed a few of my recent favorites below. But the best thing to do is to develop your own nursery stock. Watch this space for an article on that soon!

Online (links to these from plants above)

Links and sources posted are for information purposes. No UC endorsement is implied or intended. 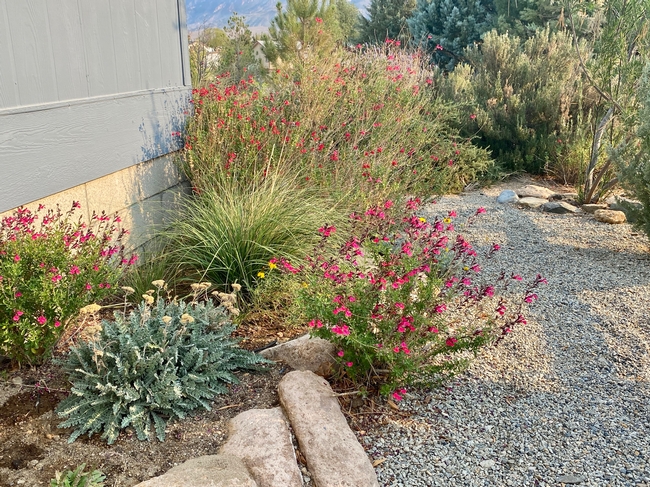