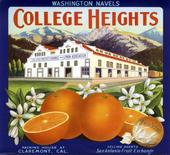 Colorful orange crate labels helped to brand Los Angeles and Southern California as a new Eden, the land of sunshine and good health.

Over the years, I’ve heard quite a few people, including my parents, talk about getting an orange in their Christmas stocking when they were children. Apparently, this custom dates back many years. It was a special treat, in a time when oranges were expensive.

Oranges were brought by the Spanish as they settled the missions, and the first sizable grove in Alta California was planted at the San...

“The school garden has come to stay.”

In 1909, Ventura schoolteacher Zilda M. Rogers wrote to the Agricultural Experiment Station at the University of California, Berkeley, then the flagship agricultural campus for California’s land grant institution, and a primary proponent and provider of garden education resources for schoolteachers. Rogers wrote in some detail about how her school garden work had progressed, what the successes and failures were, how the children were responding to the opportunity to garden, how her relationship with the children had changed as a result of the garden work, and what she saw as potential for the future.

“With the love of the school garden has grown the desire...