Click HERE to find a great step-by-step instructions by Sunset on building your own raised bed!

The Benefits of Raised Beds

Other issues to consider:

More information can be found here: We are so grateful for the hard work that the Youth CCC's put into our garden!  They found this large rock under the walnut tree and moved it over to use as a garden feature in the center of our "round about" path. So excited!  Here's the truck backing in with the delivery of the garden shed.  We were so fortunate that Susie got a great discount on it from Oak Country Lumber and Ranch Supply in Santa Margarita because it was one of their samples in the store.  At this point I'm wondering how on earth we will unload this thing! What a relief- it's on a pipe and one man used a rope to let it down slowly from the lift bed.  They made it look really easy! It was moved into final position by two boards with a pipe in between. The delivery guys- who made it look easy! A beautiful coat of green paint was applied! The final project for the day was planting iris around the rock. The kids were proud, happy and tired by the end of the week!

So much has happened!

Here's a little summary of the garden to date:

(Please forgive me if I forgot someone or something...things are moving and shaking now!  A special thank you for Susie who has been recording everything daily!  Much of this was extracted from the communication that she has been doing with the Demo Garden Committee!  Please feel free to comment on the post if you believe I forgot something or if there are any corrections.)

Weds. July 8:  An irrigation committee (Ray and Wes from the new class are the expert leads along with our architect Scott Dowlan, and the Giambalvo bros.) met to lay out a plan of attack!

Tuesday, July 14:  Wes, Ray, Ed, Susie, and Thorv met with Mary B. to go over details of the installing the irrigation.  We've had an "all clear" from the utility companies that there are no underground utilities present on our site!

Thursday, July 16:  Wes, Ray, Bill, Ed, and Thorv mapped out with blue spray paint the lay out of the irrigation system Friday, July 17:  Trencher was brought in from United Rentals as a donation coordinated by Wes!  The entire layout was trenched out from 8:30- 10:30am.  Bill helped  out this afternoon with shoveling!

Saturday, July 18:  Irrigation assembled and installed all with tracing wire by Wes and Bill and supported by Susie and Thorv.  Wes received a donation for all of the pipe from Farm Supply San Luis Obispo!  System was fully checked for leaks.   6 Hose bibs and 4 valve box manifolds.  There are ball valves at all 4 corners of the irrigation, so there's easy shut off in the case of a leak.  The pipes that are near any old underground rocks or concrete have been insulated so that there's will be no rubbing or contact with abrasive edges.  We owe Wes and Bill a very big thank you for all of there expertise and hard work!  We have our own water meter that will track the water used for the garden and great water pressure!  Yippee!!! Pathways:  There's lots of rules and regs to meet the American's with Disabilities Act compliance.  Many excruciating hours were spent surveying the area with Ed, Ray and Susie to find the best pathways possible to meet this compliance!  Here's a link for more information about the regulations for ADA compliance: Monday, August 10:  We were lucky enough to have the CCC Youth Group come for a week to help out!  They arrived about 9:00am!   Thorv, Marylou, Susie, Ray, Ed, Mary and Amy were present. Thorv did a very nice job of explaining to them what the mission of the MG program is about  and how we hope to use the demo garden.  Then Ed and Ray showed the group how to use the transom to map out ADA compliant pathways and spent the rest of the day helping to supervise the crew.  They started out the raking out the soil at the utility pad area and all the pathways and using the soil compression vibrator- which broke its' belt almost immediately!  Once that was fixed, then the engine kept flooding.. so there's always a few little bumps in the road.  Ray coordinated borrowing the county golf course compactor  for the next couple of days.  He’s not sure if they will stay on schedule right now, but the DG is being deliverered tomorrow!  There's a whole lot of surveying and using levels.  It's very challenging and Ray and Ed are really doing an awesome job at meticulously checking and rechecking our grade to meet the ADA compliance! Carol K. brought watermelon, cookies, chips and ham sandwiches for breaks and lunch  (they loved the home-made cookies.  Susie brought a jug of lemonade and spent the day as a gofer, served lunch and snacks and even managed to do a little work.  The young people are all very nice and I really enjoyed being around that age group once again. Tuesday, Aug 11:  Fifty tons of decomposed granite was delivered to our garden.  Ray and Ed were again on site to help supervise the youth crew (four called in sick today) .... we had a reduced number of workers but we still made progress on the pathways.  Nell was there in the morning to help with snacks and to serve lunch.  Carol Dulitz served a wonderful lunch of tacos, beans, cookies and ice cream.   Jutta brought boxes of fruit.  The crew members are so appreciative of the special care they are receiving from our MG's.  After lunch Susie taught a lesson on invasive species and the purpose of the trapping program of SLO county. Weds, August 12:  Another productive day in the garden!   Today we finished putting most of the DG on the pathways and utility area....it looks great!   We even have a special focal point!   Ray and Ed continued to supervise the troops and we really owe them a vote of thanks.   Wes came out this afternoon and did some needed tractor work.   Alice brought some wonderful snacks for the crew and Jutta bought pizza for lunch.  Nell was there in the morning and Susie was there in the afternoon to help serve and clean up.   Wes also did a great lesson for the  crew on irrigation systems and how ours was put together.   Then Mary had the crew making mud pies as she taught them lessons on how to tell the difference between soil types and she did a great demo on soil erosion.   Scott, the landscape designer that did our initial plan came out to see what we have done so far and seemed to be  pleased. Thursday, August 13  Major progress was made on the pathways!  The kids are getting burned out.  Today was 94F early in the day with no breeze and tomorrow is  their last day with the CCC, so they have a bit of senior-itus going on.  Four of them called in sick, but the crew manager went to their houses to pick them up.   The D.G. is being raked level, water it in once or twice and it sets up.  DG is a great product to use because it is a semi-permeable, temporary pathway that can be packed firm enough for wheel chairs to use with out getting stuck (that's what happens in gravel!)  Cindy taught a lesson on water conservation practices after lunch.  The students had a lot of curiosity.  It was really funny that all of them were most curious about low flow toilets and self-composting toilets..  She did a wonderful job. 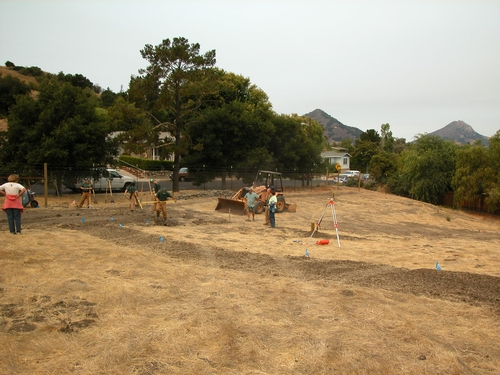