Celebrities have taken the “food stamp challenge,” trying to feed themselves on a budget equivalent to federal food benefits for the poor. Most have failed, but UC Agriculture and Natural Resources (UC ANR) has found a way to help low-income families successfully stretch their food dollars and eat healthier while receiving food assistance.

San Joaquin County nutrition educators are not only promoting physical activity to the families they teach, but walking the talk together every day.

Family nutrition educators from University of California CalFresh [UC CalFresh] and Expanded Food Nutrition Education Program [EFNEP], two federally funded nutrition education programs that provide free nutrition workshops to low-income families, have joined together to practice the lessons they teach to their participants in San Joaquin County, including exercising for at least 30 minutes a day.

Mothers in Recovery visit the farmers market together to buy healthy food for their families.

Mothers who have overcome addiction are learning from UC nutrition educators in Placer County how to improve their lives and their children's lives with healthful eating.

The women, participants in Mothers in Recovery, meet once a week for up to one year to boost life skills and support one another through a challenging period of their lives. Four times, they are joined by UC Cooperative Extension nutrition educators to learn healthy eating on a budget.

“Our curriculum – Plan, Shop, Save and Cook – is very simple and has great visuals,” said 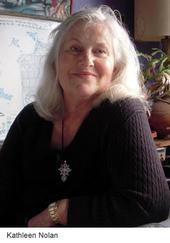 “The reporter was reaching for a processed meal in a box, and I was yelling at the television, ‘You can’t buy anything in a box!’” Nolan said. “The reporter couldn’t survive on the budget, but I know that I can.”

To prove her point, Nolan decided to take her own Food Stamp challenge. For the month of January, she is eating healthy on a Food Stamp budget and blogging about her diet on Facebook. Nolan writes about menus, shopping lists, recipes,...

In an effort to break down stigma and encourage greater participation, the program formerly known as "Food Stamps" is now called "CalFresh" in California. The program adopted a new logo and a new slogan: “Better Food for Better Living.”

The name Food Stamps, used for more than 40 years, was officially retired by Congress in 2008, and the program became known nationally as "Supplemental Nutrition Assistance Program," or SNAP. However, California officials determined SNAP didn't test well with focus groups.

CalFresh was designed to capture the essence of the state and its position as a world leader in agribusiness, according to a California Department of Social Services