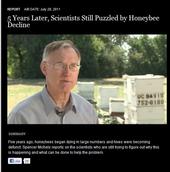 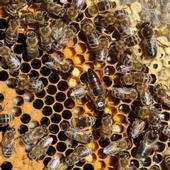 Backwards beekeeper Russell Bates calls the problem "chemical collapse disorder" because, in addition to the stress on bees caused by certain commercial beekeeping practices, the beekeepers use miticides and antibiotics...

In all, the stolen bee colonies were worth about $120,000, according to an article in

UCR museum scientist Doug Yanega - the co-principal investigator of the grant that also involves UC Davis, UC Berkeley and seven other institutions -  oversees one of nation's best collections of bee specimens, the article said. It includes iridescent green and blue...