Entomologist/artist Diane Ullman of the UC Davis Department of Entomology and Nematology will speak on “Winds of Change: Bridging Art and Science”  from 3:45 to 5 p.m. in the Room 1138, also known as "The Foster Room."

Ullman and Billick created the art/science fusion concept in 1997 with the introduction of an undergraduate course, “Art, Science and the World of Insects,” that became the centerpiece and inspiration for the UC Davis Art/Science Fusion Program.

Ullman, both a noted entomologist and a talented artist, will relate how the UC Davis Art/Science Fusion Program was developed, why the connections between art and science can be transformational to teaching in both formal and informal settings, and how  community inspirations and educational infrastructure are needed to succeed. “As the winds of change moved across the landscape, bridges between visual and performing arts, design, science and technology were built and programs around this concept have arisen worldwide,” Ullman noted. 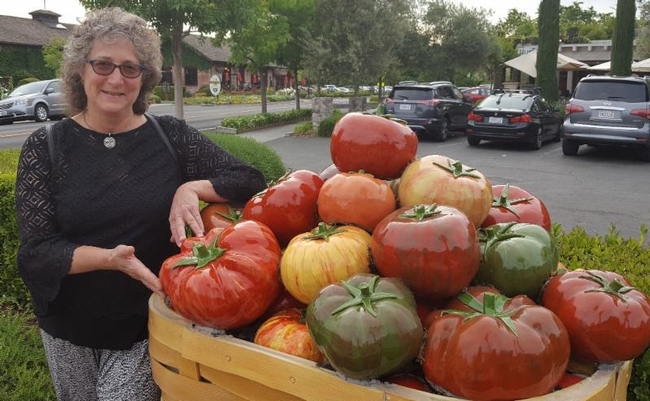 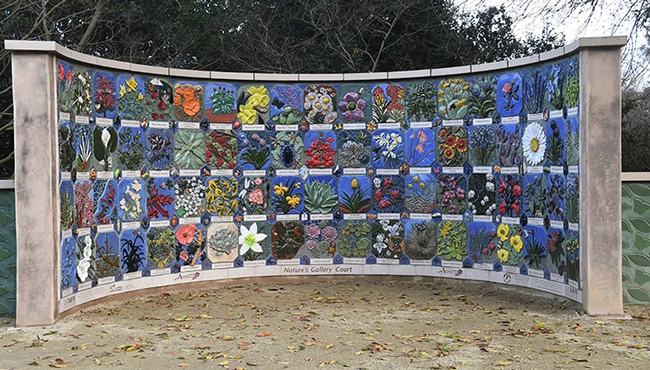 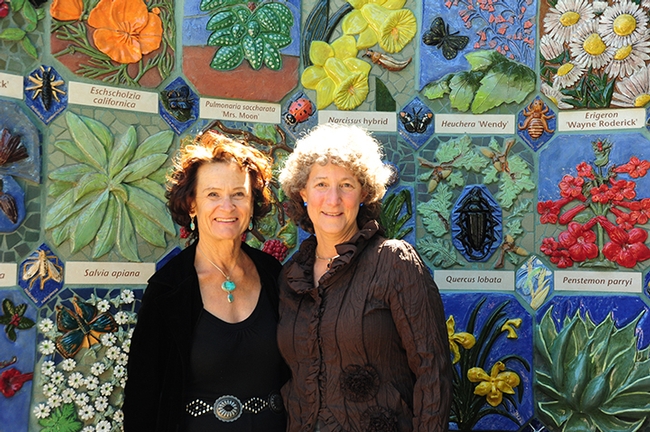 Entomologist/artist Diane Ullman of UC Davis is seeking entries in the Consilience of Art and Science Show. (Photo by Kathy Keatley Garvey)
Time is ticking...do you fuse art with science? Is your art ready to show?

Organizers of the Consilience of Art and Science Show, a biannual display sponsored by the UC Davis Art/Science Fusion Program and the Pence Art Gallery, Davis, are reminding everyone that if you fuse art with science, remember this deadline: Dec. 15.

Entomologist-artist Diane Ullman, UC Davis professor of entomology and co-founder and co-director of the UC Davis Art/Science Fusion Program, says artists selected will show their work in the Pence Gallery from Jan. 26-March 2. The goals of the exhibition are three-fold: to show creative work that explores the intersection between art and science; to foster communication between the arts and sciences, and to spark new ways of viewing the world and ourselves, according to Ullman and Pence Gallery director Natalie Nelson.

The organizers encourage "creative work that transcends pure scientific illustration to explore the conceptional realm where art and science both reside." All artists and scientists, regardless of residence, can exhibit up to three works. This refers to original 2D and 3D work in any medium, related to the intersection between art and science. It encompasses photography, drawing, textiles, painting, sculpture, video and mixed media. Dimension restriction is at the discretion of the jurors.

Artists will upload their submissions online at http://www.pencegallery.org. A vital part of the submission is the artist's statement--not to exceed 100 words--which should clearly explain how the work relates to the art/science connection. The statement may be displayed with the accepted work. Work must be available for the entire run of the exhibit.

To enter, access http://www.pencegallery.org and click on "Call to Artists" to apply directly to the site. Entry fees are $35 and $40, respectively, for Pence and non-Pence members. Fees will be used for expenses and awards related to the exhibition. No hand-delivered art work will be accepted. Accepted work may be hand-delivered or shipped and insured by the artist to the Pence Gallery, 212 D St., Davis, CA 95616.

The Pence, established in 1975, is a non-profit art gallery. Its mission is to educate and inspire the community by exhibiting high caliber art by local and regional artists, according to director Natalie Nelson.

Sales are encouraged. The Pence Gallery will retain a 50 percent commission on work displayed at the exhibit. For more information on the exhibit, contact Nelson at (530)-758-3370 or penceartdirector@sbcglobal.net. 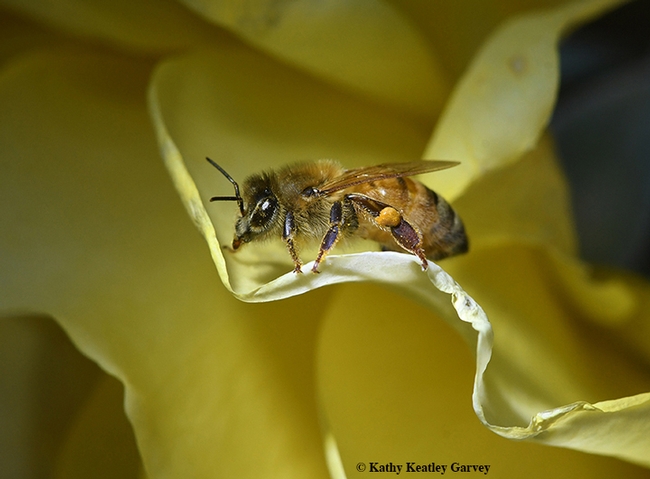 If you're going to the UC Davis Arboretum Member Appreciation Plant Sale, set Saturday, March 7 from 9 a.m. to 1 p.m. in the Arboretum Teaching Nursery on Garrod Drive, you'll be in plant heaven.

You'll see drought-tolerant plants, plants perfect for your pollinators, and the Arboretum All-Stars. The All-Stars are the Oscars of your garden. They're like Academy Awards. The horticultural staff selected some 100 plants that are  "easy to grow, don't need a lot of water, have few problems with pests or diseases, and have outstanding qualities in the garden. Many of them are California native plants and support native birds and insects. Most All-Star plants can be successfully planted and grown throughout California."

The teaching nursery is stocked with more than 14,000 plants of almost 400 varieties. Eighty-percent were grown on site. (Download this PDF to access the inventory.)

It's a members' only sale, but anyone can become a member at the door. The staff asks that you BYOC or BYOB. That's Bring Your Own Cart or Bring Your Own Box. A limited number of carts is available.

While there, be sure to check out the permanent garden art that graces the teaching nursery. You'll see artistic bugs created by UC Davis students under the tutelage, encouragement and inspiration of the Ullman/Billick duo. That would be entomologist/artist Diane Ullman, professor of entomology at UC Davis, and self-described "rock artist" Donna Billick (who has a bachelor's degree in genetics). They co-founded and co-directed the UC Davis Art/Science Fusion Program. The resulting ceramic-mosaic art is a treasure trove, not only in the Arboretum teaching nursery, but throughout the campus and downtown Davis and beyond. It's a living legacy of what can be done when art is fused with science, and when science is fused with art. 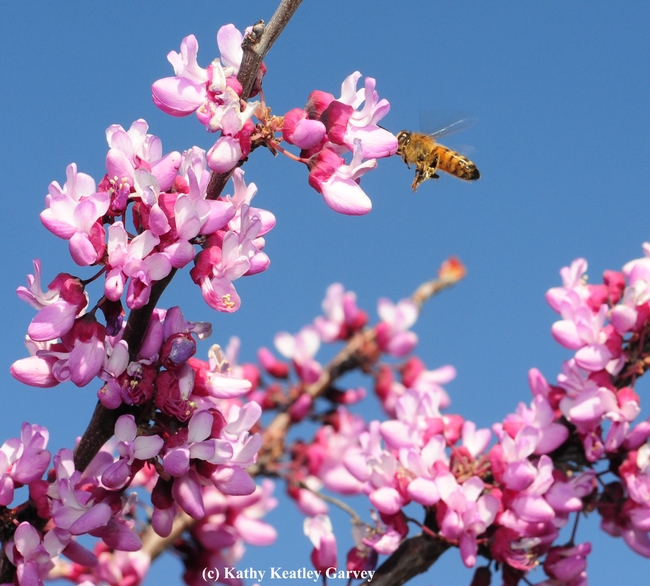 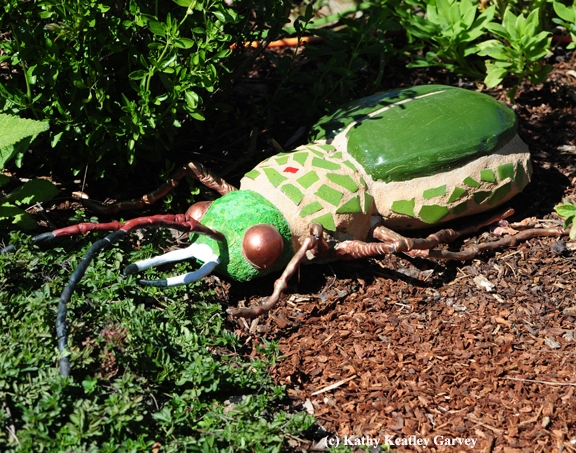 This bug will greet you in the UC Davis Arboretum Teaching Nursery. (Photo by Kathy Keatley Garvey) 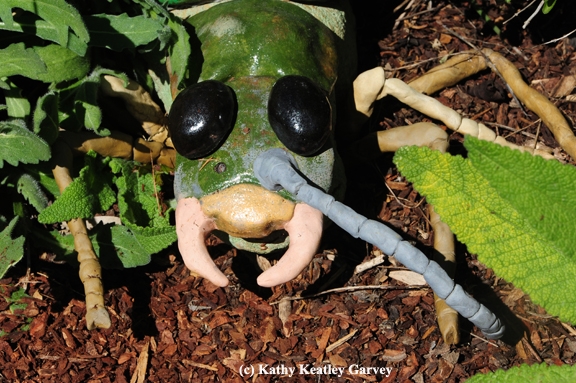 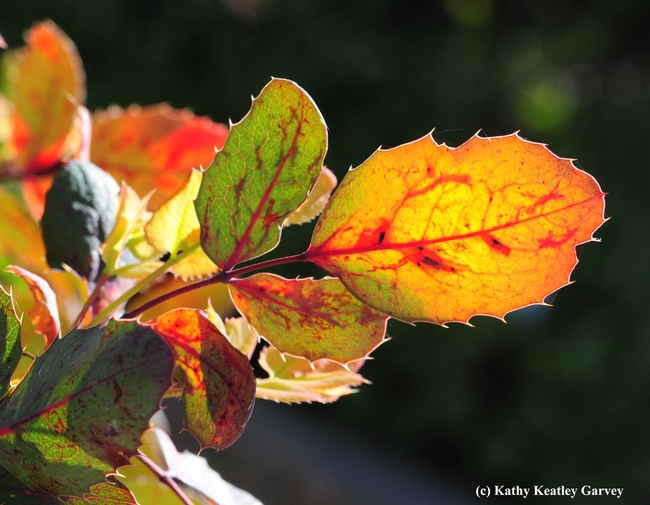 Mayfly on an atichoke. (Photo by Kathy Keatley Garvey)
This week while searching through backyard  photos, I came across a mayfly I photographed on July 1, 2012 on our flowering artichoke. It looked like a little ol' man skiing through a purple landscape of spiked petals.

How did the mayfly wind up on the flowering artichoke? Well, there's a body of water close by--our fish pond.

Speaking of fish--not the kind in our pond, though--the UC Davis Art/Science Fusion Program is hosting a LASER-UC Davis event on Thursday night, Dec. 4 and one of the speakers is Chris Dewees, retired marine fisheries specialist, who fuses art with science. His topic: "Passion for Fish: When East Meets West."

The LASER event, free and open to the public, is scheduled from 6:30 to 9 p.m. in the Room 3001 conference room of the Plant and Environmental Sciences (PES) Building, UC Davis campus. LASER is an acronym for Leonardo Art Science Evening Rendezvous.

Dewees, a San Francisco native with a lifelong passion for fish, will speak from 8:10 to 8:35. His career has included commercial fishing and 35 years as the statewide marine fisheries specialist based at UC Davis.

When first exposed to the Japanese art of gyotaku, DeWees says he was "hooked." Gyotaku is the traditional method of Japanese fish printing, dating back to the mid-1800s.

His illustrated talk will offer insights into two-way communication between scientists and artists. "I will talk about how I can express my love of fisheries as a science-based career and as art."

"Combining my fisheries expertise with this art form gives me a very balanced life and a way to communicate my passion for fish to others," DeWees says. The art has led to shows and adventures around the world including the Smithsonian. Dewees received his bachelor of science degree from the University of Redlands in biology and speech; his master's degree from Humboldt State University in fisheries; and his doctorate at UC Davis in ecology.

Three other presentations will take place at LASER-UC Davis event.  It's a good time to "bug out" of the house and attend.

7 to 7:25 p.m. Venkatesan Sundaresan, a plant sciences professor at UC Davis, will speak on “Mysteries of the Silent Kingdom: Sticking to One's Roots, Managing Hormones and Spreading Genes”

8:35 to 9 p.m.   Nanette Wylde, professor of art and art history at California State University, Chico, will speak on “Instigating Some Kind of Action: Interactive Projects Online and Off.”

The coordinator/moderator, Anna Davidson of the UC Davis Art/Science Fusion Program, received her Ph.D. earlier this year from UC Davis in plant sciences and is now seeking her master's degree in fine arts.  She continues to study the biological world using both artistic and scientific approaches.

The UC Davis Art/Science Fusion Program was founded by entomologist/artist Diane Ullman, professor of entomology at UC Davis and her colleague, self-described "rock artist" Donna Billick, now retired. Their legacy--and that of the students they taught--is the mosaic ceramic art all over campus and beyond. 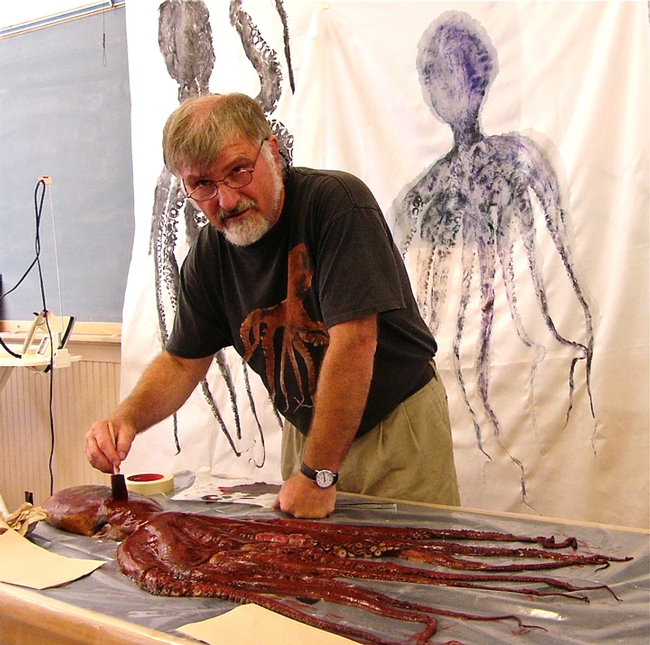 Tom Tucker's bee hat: all the buzz! (Photo by Kathy Keatley Garvey)
If you missed the first fall plant sale at the UC Davis Arboretum Teaching Nursery on Garrod Drive, you're in luck.

We attended the sale on Saturday, Oct. 11 and it was the equivalent of Black Friday (the Friday following Thanksgiving Day). Only this was like "Green Saturday."  It was a gathering of green thumbers and wanna-be green thumbers. We delighted in seeing their enthusiasm for plants and pollinators.

Bee enthusiast/UC Master Gardener Tom Tucker of Vacaville was there to display his bee condos, or housing for leafcutting bees and blue orchard bees. The bee condos? They're easy to make, he says. His "bee hat" was all the buzz.

Art was there in the form of ceramic insects that UC Davis Entomology 1 students created under the encouragement and direction of the UC Davis Art Science Fusion Program, co-founded and co-directed by entomologist/artist Diane Ullman and artist Donna Billick. Ullman is a professor of entomology at UC Davis and Billick is a self-described "rock artist" who retired from teaching classes at UC Davis in June--but not from art. A ceramic ant nestled in the plant growth. (Photo by Kathy Keatley Garvey)
A sign indicated that the ceramic insects were perching, nesting or resting.

Not to be outdone by the ceramic bees, the real bees were there, too. We watched them nectar purple  lavender (Lavandula), red blanket flower (Gallardia) and the yellow bulbine (Bulbine frutescens). One good rule of thumb in purchasing plants for pollinators: observe what the pollinators like.

If you don't know a plant from a hole in the ground (in preparation for a plant, of course), you can ask the experts at the Arboretum Teaching Nursery. 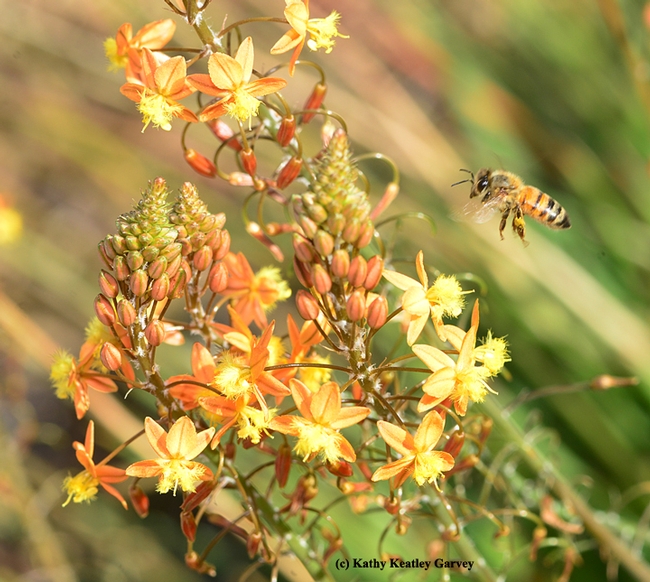 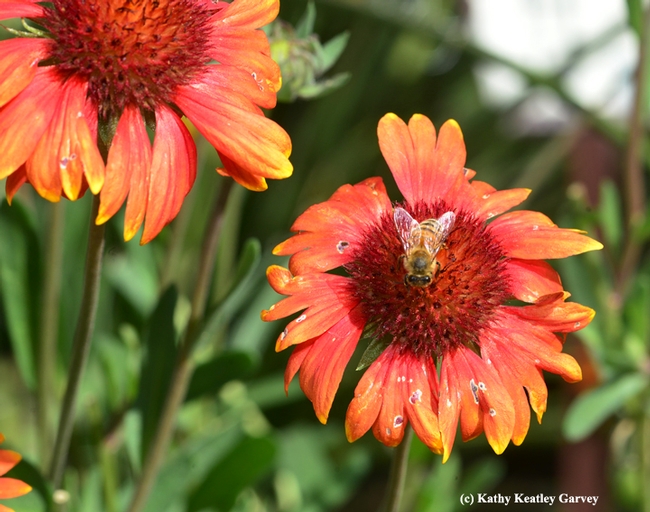 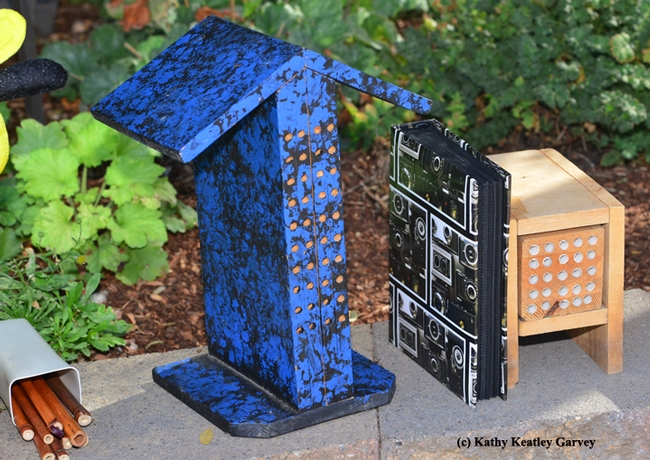 These are some of the bee condos that bee enthusiast/UC Master Gardener Tom Tucker displayed at the Oct. 11 fall sale. (Photo by Kathy Keatley Garvey) 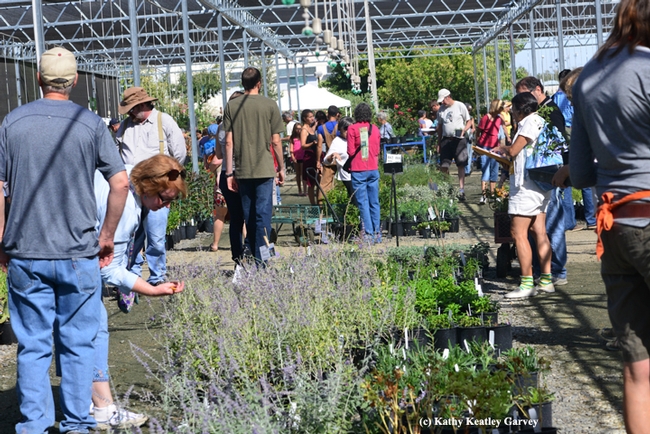