So that growers, PCA's and other agricultural people might have a bit more access to UC and UCCE scientists, entomology Advisor Shimat Joseph is sponsoring a breakfast meeting at my auditorium at 1432 Freedom Blvd in Watsonville on March 10.  We have both Plant Pathology Farm Advisor Steven Koike speaking about diseases, followed by our special guest entomologist and IPM Advisor Pete Goodell out of the Kearney research station in the Central Valley (he has a enormous amount of experience with lygus).

Point is to have a good discussion between people involved in strawberry production and UC scientists, along with having a great breakfast of course.  Come by if you have the time - starts at 630 am and will be wrapped up by 8. 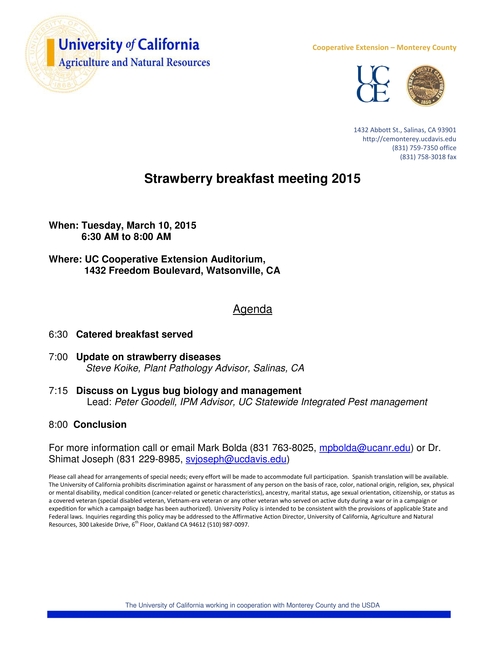 The lygus meeting planned for tomorrow, March 27 at the end of Jensen Road in Moss Landing will now be held at the UC Cooperative Extension office at 1432 Freedom Blvd in Watsonville.

I saw this photo in the UC IPM archives.  Since it is a really unusual configuration and the fact that lately bug-vacs have become a bigger part of the lygus management discussion again, I thought this might be something to share with my readers.

To find out more, I contacted Thom Flewell, who wrote this in response:

"I used to have 3 bug vacs with that general configuration. The fans were from  plastics manufacturing and were used to move the pellets that formed the feed stock for producing plastics. Mike McCluney made many Bug Vacs using these fans, usually with one fan per bed. They were very heavy, and demanded about 17 horse power per fan. The tractors had barely enough power to operate the fans and move the machinery down the rows. There were two disadvantages with these machines. The size of the fans required mounting them off the back of the tractor. The aspirator head had to be placed forward of the tractor to keep from scaring the lygus and causing them to drop below the effective suction zone of the machine. The problem was with the distance that separated the head and the fan. Vacuum was reduced significantly along the travel from the head to the fan. The second problem was the weight of the machines. It was not uncommon to have a driver let his attention wander and the tractor then wandered too, going from the hard-packed furrow to the soft and soggy bed. When the wheels left the furrow and sunk in the beds, destruction followed and pulling the tractor back up onto the furrow was like trying to pull it from a swamp onto a railroad track.

The greatest advantage to these fans was that nothing that enter the volute exited alive. The fan employed flat impeller blades accounting for their inefficiency. But that same inefficiency meant that air and anything entrained in the air flow probably collided either with the blades or the side of the fan before exiting. Only parts remained. " 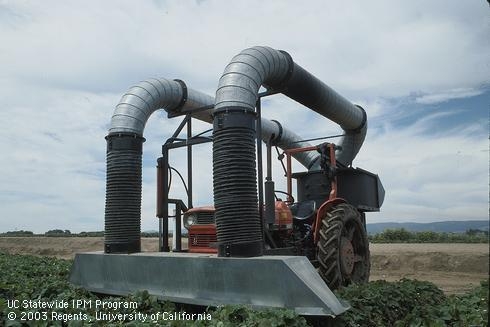 UCCE is sponsoring a meeting on lygus in strawberries to be held April 18.  Four Ph.D. level entomologists (and one fruit guy) will bring together a veritable brain trust in one room to share decades of experience and knowledge in entomology and lygus bugs.

Biology, sampling, cultural, chemical and biological control of lygus will all be discussed.  This is without a doubt a can't miss event for growers, PCA's and anyone else interested in the latest and most in-depth information available on this difficult pest.

Agenda is to be found here: 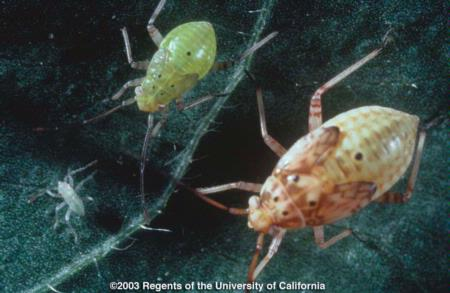 A meeting on lygus and its management in strawberries will be held this coming April 18.
Tags: lygus (11), strawberry (74)
Comments: 0
Field efficacy of the experimental insecticides sulfoxaflor, tolfenpyrad and flonicamid for lygus bugs in strawberry.
Published on: February 28, 2013

Introduction: As noted previously in this blog, lygus bugs are a major pest in strawberries since they cause mis-shaping of fruit from their feeding on the early forming fruit.  This pest has been a real challenge to California strawberry growers, one reason being that the populations in the Central Coast production regions have become quite tolerant or even resistant to many of the pesticides used for it.

Fortunately several promising insecticide chemistries for control of lygus bugs have become available for field trials over the past few years.

Please note that sulfoxaflor and tolfenpyrad are still NOT REGISTERED (flonicamid is) for use in strawberries.

Three large scale trials of up to a third of an acre per treatment were conducted this past year to test these three novel insecticides under real field conditions.

Application: One trial in a second year strawberry field in Salinas testing three materials (plus one grower standard) was conducted with a standard research backpack sprayer (applied 5/3/2012), another (overseen by the California Strawberry Commission) in a first year field in Guadalupe with a tractor mounted spray rig (applied 8/28/2012 and 9/12/2012), and a third in Watsonville with another tractor mounted spray rig (applied 10/5/2012 and 10/12/2012).  Refer to the table below for rates of test material and water carrier.

1 Note that these materials were added with the surfactant Natural Wet at the rate of 8 fl oz/A.

Insect and Fruit Sampling:  Lygus bugs were sampled by beating 20 strawberry plants (3 times each) in a row into an open plastic container and counting small nymphs, large nymphs and adults.  Lygus bugs were sampled weekly for 6 weeks following the first spray application in Guadalupe, weekly for three weeks following the first application in Watsonville and weekly for four weeks following the application in Salinas.  Fruit evaluation took place on 9/26/2012 and 10/10/2012 in Guadalupe and 10/19/2012 and 10/26/2012 in Watsonville.   Fruit sampling consisted of randomly picking 50 fruit from the center two furrows of each trial.  These picked fruit were graded into three categories; marketable, unmarketable due to lygus feeding (“catfacing”) and unmarketable due to other causes (mainly rots and small size).

Results and Discussion:The experimental sprays worked, especially the sulfoxaflor.  Analysis by date show that sulfoxaflor treated plots in the Guadalupe and Watsonville trial were associated with lower numbers of adults, large nymphs and small nymphs on multiple dates after the initial application, and treated plots in Watsonville.  Tolfenpyrad also did result in significant reduction in numbers of nymphs and adults on certain evaluation dates, particularly two weeks after the first application.

See Graphics 2-4 below for visual demonstration of evaluation results of lygus nymphs and adults 14 days after first pesticide application at each trial site.

Outside of malathion and flonicamid, the sulfoxaflor and tolfenpyrad are still NOT REGISTERED for use in strawberries.  Before using any insecticide products, check with your local Agricultural Commissioner's Office and consult product labels for current status of product registration, restrictions, and use information. 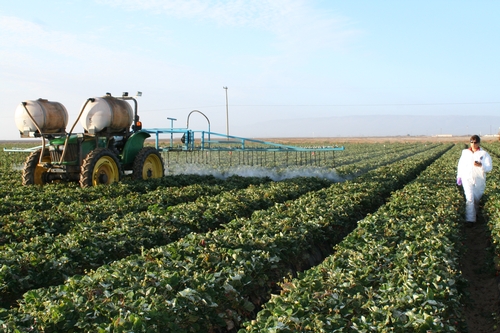 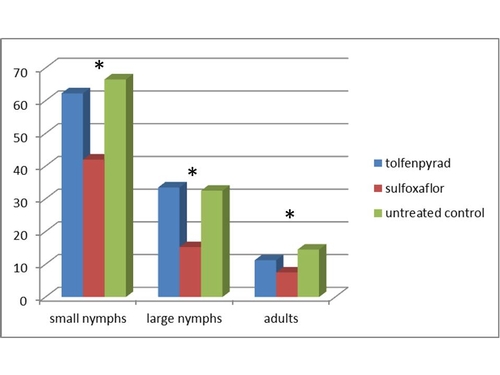 Graphic 2: Results 14 days after first application of experimental insecticide for lygus in Guadalupe 2012. *Indicates treatment was significantly lower than the untreated control. 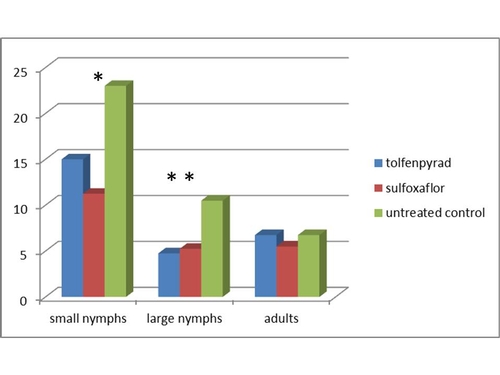 Graphic 3: Results 14 days after first application of experimental insecticide for lygus in Watsonville 2012. *Indicates treatment was significantly lower than the untreated control. 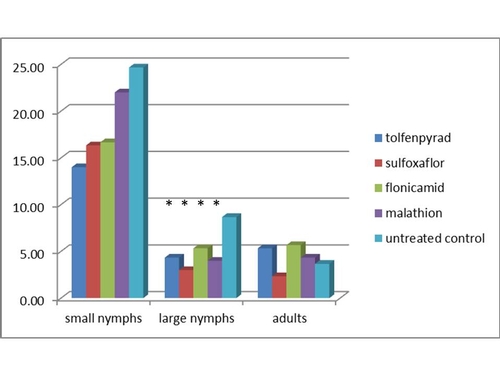