UCANR: Promoting healthy people and communities
Drought-tolerant plants can save water, but beware of those that are toxic 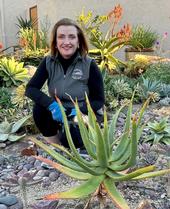 A nearby friend rushed her to the emergency room where the doctor diagnosed chemical burns to her corneas and washed her eyes with two liters of saline water each. Murphy removed the plant from her garden, but saw it growing throughout her...

Most people deal with ants around their home at some point. Because most ants live outdoors, focus efforts on keeping ants from entering buildings by caulking entryways. Follow good sanitation practices to make your home less attractive to ants. Spraying ants inside the home will not prevent more ants from entering. Use baits to control the ant colony. Pesticide baits work by attracting worker ants who then take the poison back to the nest where the entire...