"To plant a garden is to believe in tomorrow." 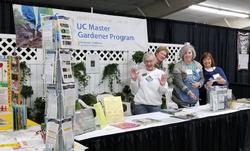 Have a gardening question?

Our gardening Helpline is open and we are here to help!

Please email your questions to mgfresno@ucdavis.edu

Including photos is helpful.  We are looking forward to hearing from you! As spring begins to take hold in the garden, it’s so nice to see plants that died back during the winter returning and ready to flower. Some of those plants, much to my dismay, stayed busy during the winter though appearing to be dead. All of a sudden they are coming up in places I never planted them. At times I feel like an invasion has taken place. The particular plants I’m thinking of were lovely in in the original plan but are really not welcome in my lawn and coming up in the middle of other plants or on the other side of the fence in the neighbor’s yard. The same happens with some of the neighbor’s plants that appear in my yard. I love sharing and trading plants but it’s as if an invasion has occurred.  Invasive plants can be a real problem. Once established, they are hard to get rid of or control. It makes me think of the Kudzu experiment that has taken over the southern United States.

Most often we think of invasive plants as those that are not indigenous to a region. California claims the greatest amount of natural botanical diversity of any state in the U.S. We have nearly 5,000 native plant species. Over and above the native species, there about 1,300 established non-native species of which 200 to 300 are weeds. Some of these species were accidentally brought into the state; others were deliberately planted here for various purposes. Among these plants some are considered important invasive species.

There can be undesirable consequences to the establishment of invasive species. Invasive weeds often are responsible for drastic changes to native ecosystems such as interfering with natural habitat and food sources for animals, causing wildfires to be more frequent and intense, lowering water tables by invasive trees that have deep rooting systems, with some plants even altering soil chemistry making it difficult for natives to survive.

These invasive species move out of their home ranges into new areas either by self-introduction on their own, or with human assistance that may be deliberate or accidental. Self-introduction can happen by migration on the wind, birds, and animals. This has been happening since the beginning of time. Humans have deliberately, and at times inadvertently, moved plant species from one region to another. With the development of high speed travel that doesn’t take months to circumnavigate the globe, plants move with ease into areas where they were never before known.  At times plants that were once desirable and beneficial while under human control in gardens become a problem as they escape and start to colonize and breed in areas where they are not wanted.  According to the California Invasive Plant Council, “The spread of invasive plants is one of the most significant threats to the native plant species and vegetation communities of the state, second only to habitat destruction.”

It’s up to all of us to take some responsibility for reducing the problems caused by invasive species. One simple step is careful selection of garden plants by using species that are not likely to be invasive. The following plants are at the top of the list of invasive plants that should not be planted in California: Pampas grass (Cortaderia selloana), green fountain grass (Pennisetum setaceum), Mexican feather grass (Stipa/Nassella tenuissima), highway iceplant (Carpobrotus edulis), periwinkle (Vinca Major), and yellow flag iris (Iris pseudacorus).

Instead of the above listed plants, try the substitutions shown here: Invasive Plant List   https://plantright.org/about-invasive-plants/plant-list/

For a list with pictures of suggested non-invasive plants for California, take a look at this website:  Better Plant Choices   https://plantright.org/about-invasive-plants/better-plants/

For further information about invasive plant species and what you can do to help, I suggest the following websites:

The 39 Most Invasive Plant Species in California

16 Invasive Species Sold at Garden Centers You Should Never Buy